How do I slow down a pocket door when opening and closing?

I had a pocket door installed in 2009 and the pocket door slides way too fast when opening and closing. I can't work out how to slow it down.

I'm currently installing a pocket door. It's a full 1.75" exterior door thickness, flush door that weighs 120 lbs (plywood facing and oak rails and stiles and oak edging.) I built the door myself (cost me 10% against the cheapest bid I got for the door.) I am using Johnson 200 series rollers and I-beam for the door. It rolls VERY easy. Easy enough to break finger bones. So this quickly became a serious safety issue for me. Luckily, before I set to finishing the pocket door wall.

I am using carpet samples (free) on the floor inside the pocket. The carpet is attached inside a separate piece of "furniture," in the sense that by removing the door trim, I can remove the pocket door and then reach inside, unclip the wood box (3/4" high, 32" long, 3.5" wide) that holds the carpet samples, replace worn samples, reclip the box back against the floor inside the pocket, place the door back, and retrim the door. I can easily set the resistance this way (packing several strips of carpet on top, if needed) and appropriate carpet samples will be available in perpetuity.

Also considered using pile weatherstripping as an alternative idea. But the carpet really seems to work better and only wears against the bottom of the pocket door which no one sees or cares about.

The thing that makes an object on motion go fast or slow is friction (or lack thereof). You need more friction.

The challenge is to introduce a little friction that will not interfere with the doors operation or mark up the visible portions of the door.

While I could envision a system of roller tensioning adjustment in a pocket door, I am not aware that any exist.

What about putting a little sideways pressure on the face of the door as it slides?

I would suggest introducing a small felt pad between one of the faces of the door and the framing that it faces. The gap in there is probably about 1/8 to 1/4 inch. Use something with a soft face and an adhesive back, such as felt chair pads. 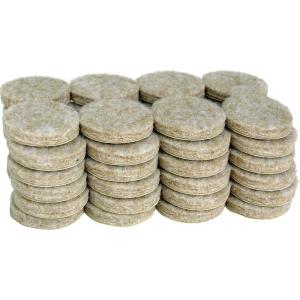 One of these could be placed inside the framing at the top of one side of the door. You would need to select a pad that is just thick enough to rub gently against the door.

You could test it by leaving the protective paper layer on the adhesive side, and putting a piece of double stick cellophane tape (not the foam type - too thick) on one half of that layer. Fit the pad in half way (so you can get it out for final placement) with the tape holding it. Try sliding.

If it seems ok, take the pad out, remove the protective layer, hold a piece of wax paper over the adhesive side and slide the whole pad into position. Use a needle nose pliers to hold the felt in place and slide out the wax paper. Use a putty knife (or a butter knife) to press the pad firmly in place.

If you need additional friction, you could add a second pad on the opposite face of the door.

I would be tempted to retrofit some soft close hardware to the door. This would keep the door easy to move but would slow down the last bit of motion. It will certainly require some work that will be difficult now that the door is installed but would give you a nice high end feel and save fingers.

Today there are many options available in the market for automatic control of the opening and closing of pocket doors. Why don't you try them?

Not the answer you're looking for? Browse other questions tagged doors pocket-door or ask your own question.

4
How do I fix a pocket door wheel track?
3
Pocket door variation
3
How can I have a light turn on when a pocket door is opened?
0
How to fix double pocket doors so they stays in the center when closed?
2
How do you service a pocket door?
0
Replacing Door Header After Pocket Door Removal
0
Bathroom pocket door warps as fall comes