Why did my extension cord melt and arc?

The extension cord has the factory end pieces on it. I went to use the cord from an exterior gfci outlet. I plugged the cord into the house outlet, walked 50' passing the female end on the way to get an electric lawn mower that I wanted to test, turned around and the female end of the cord was arcing and a 3-4" flame was coming out of the end. I had left the cord end near some tall grass so I ran and unplugged it from the house. I then stomped out still burning fortunately green somewhat lush grass.

I assume the female end of the cord must have been damaged and the insulation between the hot and neutral prong holders must have somehow degraded enough that it started arcing. This really surprised and scared me - if the grass had been dead and dry I could have started a massive fire.

I read an article recently about a man who used an "outdoor" extension cord inside to run his space heater where the cord passed under a rug under his bed. An electric fire ended up burning down his mobile home. The article blamed it on using an outdoor rated cable inside and that you should never do that. Wouldn't an outdoor extension cord be a way safer option than an indoor rated cord?

I suppose the person who got really lucky was the previous owner of the oil filled radiator as they were one use away from burning down their bedroom but maybe the arcing wouldn't have been as bad if something had been plugged in.

On inspection of the GFCI outlet it was tripped so either it tripped when I pulled the cord or had already tripped after the fire was in action. I guess that is some relief that maybe I didn't need to pull the cord. 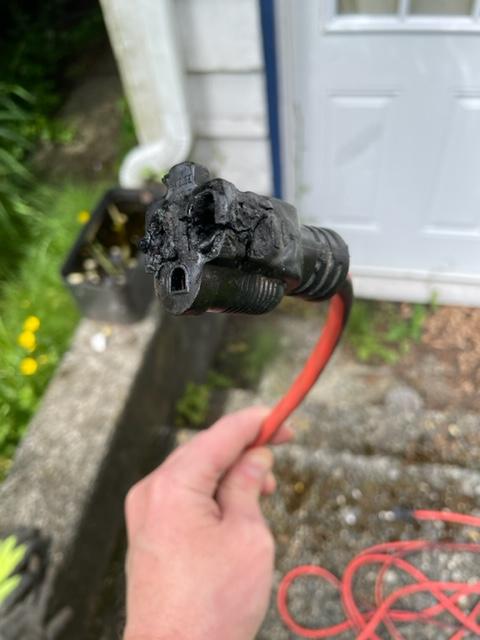 I read an article recently about a man who used an "outdoor" extension cord inside to run his space heater where the cord passed under a rug under his bed. An electric fire ended up burning down his mobile home. The article blamed it on using an outdoor rated cable inside and that you should never do that.

That's not what happened there. The problem was, the extension cord was trod upon. Months or years of foot traffic, or a furniture leg happening to land square on it, crushed the cable. Each wire has many strands. Either enough strands broke for the remaining strands to get very hot, or the strands separated altogether and began series arcing which creates a tremendous amount of heat (but current is limited to what the appliances take, so the breaker never trips).

A "space heater" is the worst case load, since it draws the absolute maximum amps.

This exact problem is why AFCI (arc-fault detecting) circuit breakers were required for bedrooms in 2005 - because bedrooms are always having plugs mashed against furniture, run under rugs, and of course electric blankets. This was widened to most living space in 2014.

However FEMA canceled the AFCI requirement on "FEMA Trailers" aka the mobile homes they stockpile to house Americans after disasters like Katrina. Those don't have AFCI and nor do pre-2007 homes. (but it's an easy optional upgrade, and since it's optional, it can even be done with a $20 AFCI receptacle at the first receptacle on the string, instead of a $50 AFCI breaker).

I plugged the cord into the house outlet, walked 50' passing the female end on the way to get an electric lawn mower that I wanted to test, turned around and the female end of the cord was arcing and a 3-4" flame was coming out of the end.

That didn't happen by accident to a new socket. That socket was already degraded inside from previous overheating. And I'm sure there was evidence of that, as warping or discoloring. Those molded-case sockets are pretty good at giving such signs.

That it happened after use with a heater is no surprise; a heater is the max power allowed on a 15A circuit.

The entire point of NEC 210.52 (receptacles at frequent spacing along walls and countertops) is to get people to stop using extension cords indoors.

Do this shipshape and Bristol fashion, don't use some hokey alternate system. You're not after "hokey".

While this won't be cheap, it'll be cheaper than heavy grade extension cords like I use (12 AWG and intended for large appliances).

Now as far as repairing extension cords, the right way to do that is to replace the plugs and sockets as needed. Trying to splice the cable inline is a waste of time IMO, and I just stick a plug and socket there.

Regularly inspect your plugs and sockets, and if they look in any way degraded, replace them immediately. If the jacket is cracking, into the trash it goes (save the replacement plugs and sockets for reuse).

There are springy contacts inside the outlet end that grab firmly onto the metal pieces of the plug. The firm grab makes for a low-resistance connection and very low power dissipation across the connection.

Eventually extension cord ends like these lose their springiness in the contacts (even wall outlets do this). As the springiness gets less, the contact pressure on the plug gets less, and the resistance gets higher. Power gets dissipated over this resistance as the load continues to draw its current, which generates heat. As less springiness and more power dissipation over increasing resistance at high current continues, the heat can get to the point that the material in the plug or outlet spontaneously combusts. The lose connection may also arc, which generates really super-high heat, which also starts fires.

I have had a few extension cords like yours that lost their contact strength, and I have felt the outlet end get hot under high current usage. A high-quality replacement outlet end saves the cord.

Edit: I noticed that nothing was plugged in yet. Something would have been bridging the contacts in your cord outlet to pass electricity between the slots. What it was would only be a guess, but the result is the same: increased power dissipation leads to heat, then to fire.

For any outdoor work with any normal tools, a minimum 12 Gauge extension cord is recommended.

Newer use more than one cord.

You are right, a overload (or lots of water) in the cord plug caused melting and consequent Arching.

A GFCI or AFCI circuit breaker could have helped.

You can get a wet protection for the cord plug. 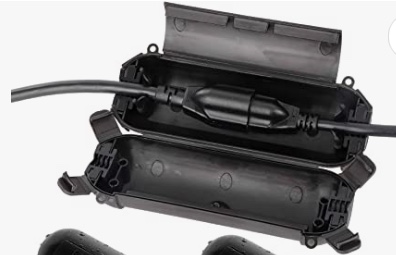 The cord was damaged over time (not at once), and eventually started shorting).

You do not know where that cord was in its previous life, and what torture was it exposed to.

This is my speculation: When the cord was used with a heater, the socket got hot enough to make the rubbery plastic soft. Maybe, the heater plug kept the contacts in place during use, and when the heater was unplugged the socket was still hot and soft, which allowed the contacts to move and touch each other. This implies the cord was also unplugged at the same moment.

That is to say, a short circuit developed just moments after the cord was used the last time. When you later plugged the cord, the short circuit was already there and started getting hot until the plastic ignited.

There are a lot of answers here that while they describe bad things that can happen I do not believe are relevant to your case. Your description says there was no load on the cord at all.

If there were truly no load there would not have been a fire, thus there must have been a load even if you didn't intend there to be one--I think you got some grass inside the hot and at least one of the neutral/ground holes. It was damp enough to provide a decent current path and dissipated a fair amount of energy--thus becoming the ignition source.

I see no reason to suspect prior damage in this scenario.