Plumber got his sewer jetter hose stuck. Whose fault is it? [closed]

Ask Question
Asked 12 days ago
Modified 12 days ago
Viewed 2k times
13
Closed. This question is off-topic. It is not currently accepting answers.

Questions seeking product or service recommendations are off-topic because they tend to become obsolete quickly. Instead, describe your situation and the specific problem you're trying to solve.

On Wednesday, a service plumber came to my house to jet the drain for my kitchen sink. He came around 9 a.m. and by 9:30 had pushed his hose beyond the clog. Then he spent 3 hours trying to get his hose out. He went to lunch and came back with a helper (his boss, I think) and they spent another 3 hours trying to get the hose out. They finally left, leaving my kitchen drain open and the water off. They said they couldn't be back Thursday, but would be back Friday. Meanwhile, I was supposed to have the septic tank pumped so that they could look into it and see if the hose was in there. (They also wanted to cut 4-inch pipes in the basement to see if the hose had gone other places.)

Thursday, I paid a guy $750 to pump out my septic. Then I had another guy, recommended by the septic pumper, to do more work. He had to cut a hole in the top of the (cement, 60-year-old) tank. $450. The hose had somehow wrapped and knotted itself around a pipe. See pic. The last guy and I were able to untangle the hose and I pulled it back about 6 feet into my kitchen.

Friday, the two original buffoons showed up, finished pulling the hose out, cleaned up, put my trap back on and now the kitchen sink is functional. Now comes the bill. They want to charge me for the 9 man-hours these two spent failing to get their hose out of my drain. I am not so inclined. I spent $1200 already getting their hose out for them. They ought to be paying me.

If there had been some problem with my line, like the pipe was crushed or broken, then maybe it could be my fault. But in this case, the pipe is fine and the problem was that he ran the hose way too far into my septic tank, where it jetted crazily around and tied itself in knots. 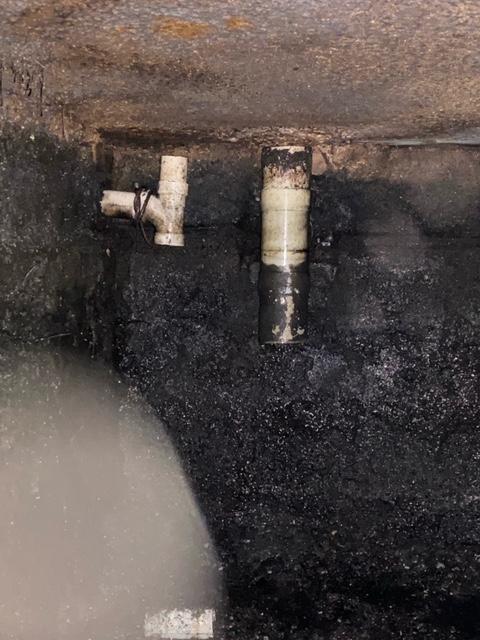 You can see the hose wrapped around the horizontal PVC at the upper left in the pic. I feel like I should bill them for part of he $1200. The tank was full and needed pumping, so I can eat the $750. But the $450 was done strictly for them to get their hose back. Then, it seems bizarre to me, that they'd try to charge me $2000 for their screw up and their failure to correct the screw up.

So my question is: Who should pay and what? Are my perceptions correct or am I all wet?

WOW! So you got a plumber to unclog a drain, he screwed up and got his hose stuck, then wanted to cut pipes to find it, then wanted you to pump the septic tank to see if they could find it there. WOW, just WOW. And then you had to get involved with the filth of a septic tank. Geeze. I dk how much you've already paid, but if you haven't paid the alleged "plumbers", I wouldn't pay them a G D dime and if they didn't like it, take me to small claims court. If you're a nice guy, you might compromise by offering to pay for the initial service call, but not the followup work to retrieve their precious hose. But if it were me, I'd tell them to pound sand.

Unless they roll over when you tell them to pound sand (they should!) I'd try to get a quick consult with someone versed in the laws of your area. Maybe get a strongly worded letter from them on official looking letterhead.

The problem with not paying your bill is that someone could potentially slap a lien on your property, which would cause all manner of bother.

I do not think there are any lawyers here.

But you have the evidence (the photo)

IMHO: With it you can ask the plumber to pay for repairs and getting it out.

Unless it is some cowboy, he has a license and has to be insured.

Or get ready for this in your state.

How to File a Complaint with the Contractors State Licensing Board

He would not risk losing his licence and will probably have his insurance pay.

Don't communicate with them except over email. They are liable for the amount you had to spend to rescue their equipment and get your drain working again. Tell them if they don't pay up your expenses, you will file a complaint with the BBB and take them to small claims court.

Do not send them a dime. Keep your communication cordial but not friendly -- this is business and you will get screwed.

Without justice, these bufoons will keep on doing the same stupid S4¡t to other unsuspecting homeowners.

Not the answer you're looking for? Browse other questions tagged sewer or ask your own question.

2
How to get rid of this sulfur problem
3
What's causing the sewer to back into the tub?
2
How do I fix a sewer snake cable that has kinked inside the spooler cage?
1
Warm Weather Smell...Again
2
Sewage smell from kitchen sink area
1
Toilet Refuses to Flush
3
Sewage coming out of concrete in basement floor
2
What is this pipe? It leaks when the sink runs