I'm looking for some input on how to "daisy-chain' wire my three canless puck lights (with Wago connectors and portable J-box) in my bathroom ceiling. I asked a question about this yesterday but now have more clarity and felt it best to start a new question. To see my prior post you can find it at the link just below but it kinda dragged on:

To summarize, I had an electrician do some work in my bathroom. I didn't realize what he had done to my existing wire connections to my three canless lights. The power was only turned off at the switch and I was fine with changing out the first two lights. However, when I got to the third light (which I believe is the first light from the switch) I let the wires touch and got an electrical shock. I noticed that one of the white wires from this light fixture was snipped and had no exposed copper nor was it connected. It was connected when I first put them in place because I remember doing so. Plus I never just snip a wire and never cap it. I always cap wires or at least use black electrical tape to completely cover the end; regardless if it's neutral or hot. The electrician must have done something to the connections at the lights that I wasn't aware of. After lots of trial and error to address my dilemma, I discovered that the dimmer switch to power these lights fried/died from the wires crossing and by me getting shocked while working on the wiring at the ceiling. After I replaced it with another one I had on hand I got the first light to work again. I left the white wire disconnected. You can see it in the photo. I'm providing here: 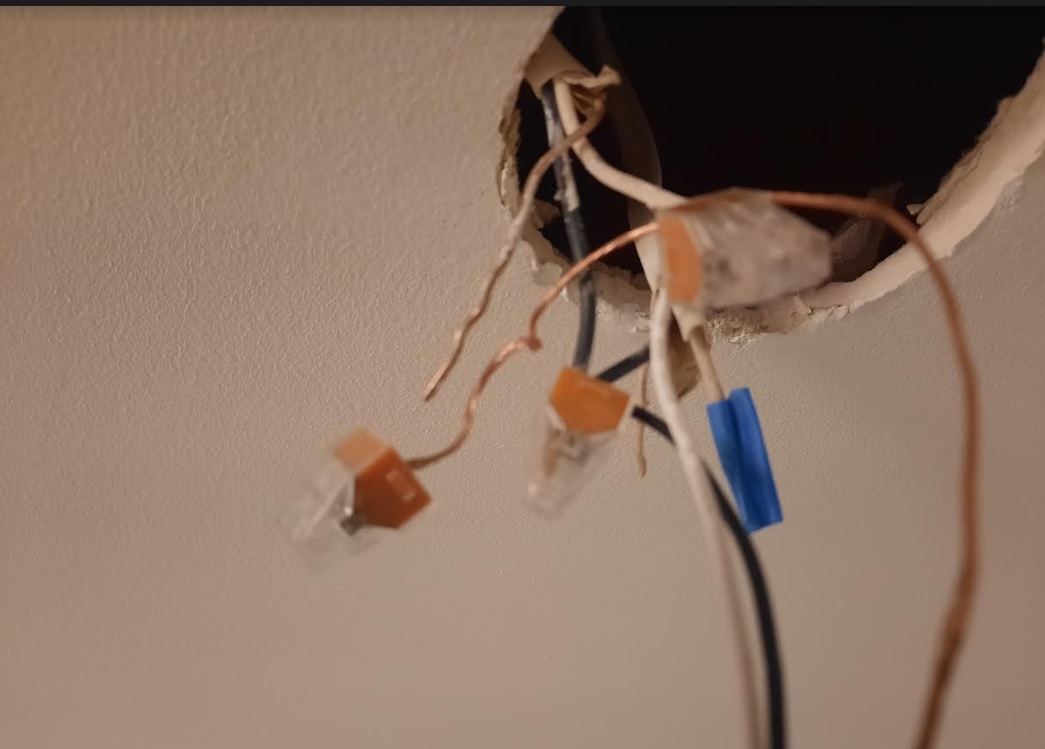 So my question is, how do I daisy-chain wire this so that the other two lights work together? I'm guessing as I quickly disconnected all the wires I might have missed if the electrician reconfigured them. But as it stands now, when I use my pen voltage tester, I get a beeping sound from the black wires at the Wago connector along with the white wire that has blue tape on it. They're even hot when the dimmer light switch is in the off position. Hence, why this blew up and I fried the light switch when I attempted to change the light fixtures.

Here are the three lights on the ceiling: 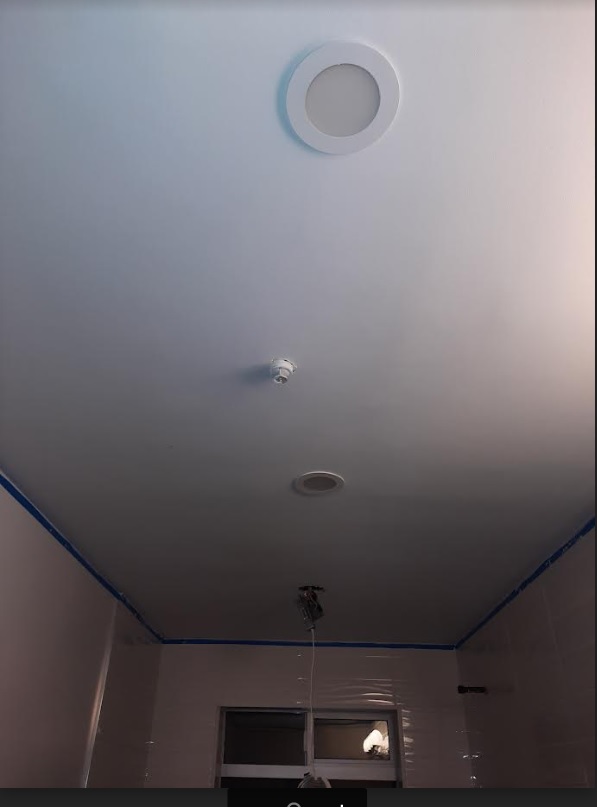 The one dangling at the far end is the one that works. And the light switch where these are powered from are on the wall just behind me while I took this pic. Here is a pic of that light switch: 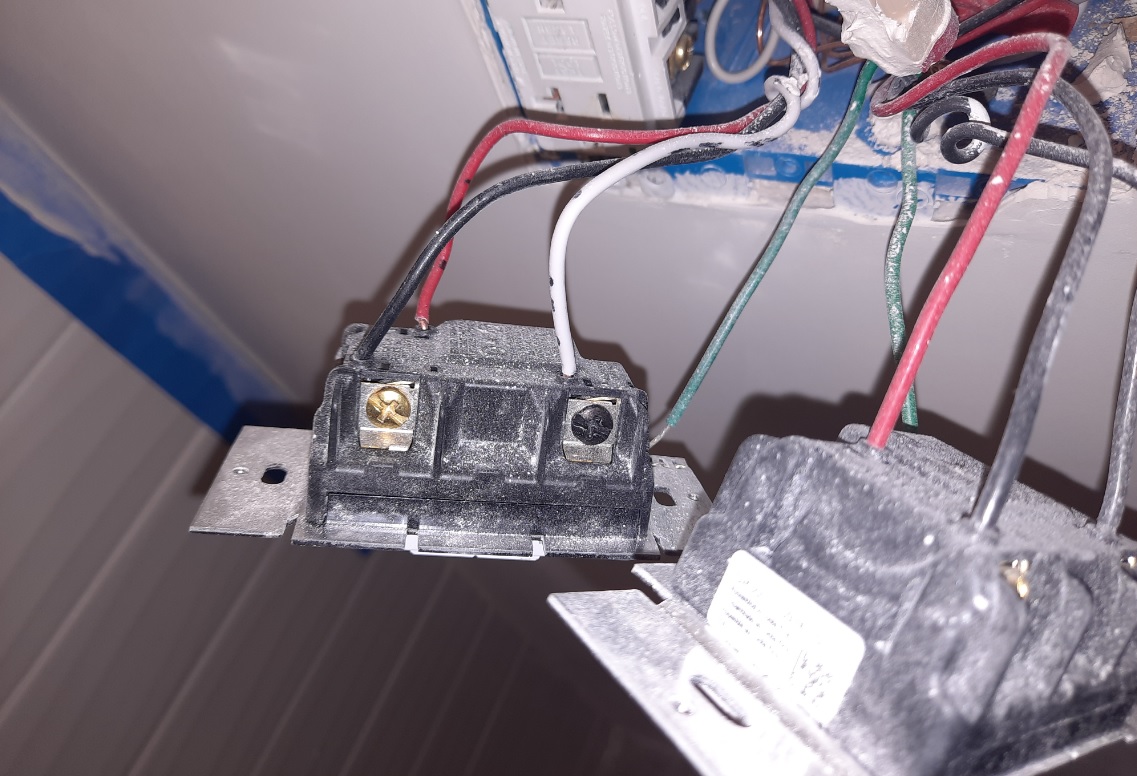 It's the light switch on the left and you can see the white wire. The electrician told me that this one was now hot and told me to wire it this way, which I did a few weeks ago and it was working fine up until yesterday when I crossed the wires at the first canless light.

The one last thing I want to add is that I'm pretty sure that the white wire that is hot was snipped with no exposed wire. But I wonder if I'm wrong. After looking at both white wires the one with fresh bright copper looks like the one I just stripped at the end (that the electrician blunt cut with no copper exposed) so I'm pretty sure that was the same one that was snipped and not connected before. But if I'm wrong I'd appreciate some input on how to configure this daisy-chain lights again. I'm hoping I don't blow up another dimmer.

The power was only turned off at the switch and I was fine with changing out the first two lights.

As you discovered, the "first two" lights were actually the last two, and all the action is at the third one.

However, when I got to the third light (which I believe is the first light from the switch) I let the wires touch and got an electrical shock.

Because, that light was wired as a switch loop. Power (always-hot and ground) comes to the first (really) lamp box, and a spur goes down to the switch. As such, there is live power in that box at all times, although, it's on a wire group that you don't need to mess with.

I noticed that one of the white wires from this light fixture was snipped and had no exposed copper nor was it connected.

The white wire is because it's a post-2011 switch loop. As of NEC 2011, all "switch loops" must be run with a real, actual neutral wire. That is, /3 must be used, with black & red being always-hot and switched-hot, and neutral "capped off" to be available if needed to power a smart switch, dimmer, motion sensor, lighted switch and the like.

Historically things like that would self-power by leaking current through the incandescent bulb, but that is no longer possible since incandescents are all but dead (and prohibited in new building codes).

After lots of trial and error to address my dilemma, I discovered that the dimmer switch to power these lights fried/died from the wires crossing and by me getting shocked while working on the wiring at the ceiling.

When troubleshooting, always remove weird stuff like that and replace with plain switches or whatever. The reason is "overcomplication". When you have unnecessary tech in there, you have too many "X-factors" and it makes troubleshooting very difficult. Then solve your X-factors one at a time lol. Get the circuit working perfectly then add the dimmer back in.

6
How to chain two recessed lights together?
3
How to wire a light fixture with 3 white wires in box?
1
How do I wire a three way switch with two lights?
2
Replacing light switch with dimmer switch... white wire?
1
Black wire crossed with white in box
0
Replacing a wall outlet with three black and three white wires with a smart outlet with one white and one black wire
3
White neutral wire wirenutted to black hot
0
How do you wire multiple lights to a single three way switch