Anything missing from my panel install?

First sub panel install. Anything I can improve on before calling for my rough-in inspection?

Only thing I’m not sure of (and aware of) is that I’m using the panel as the ground between the second and first grounding bus, not sure if I should link the buses directly with some bare #6. I’m guessing not as the metal box is probably a bigger grounding plane than copper wire. 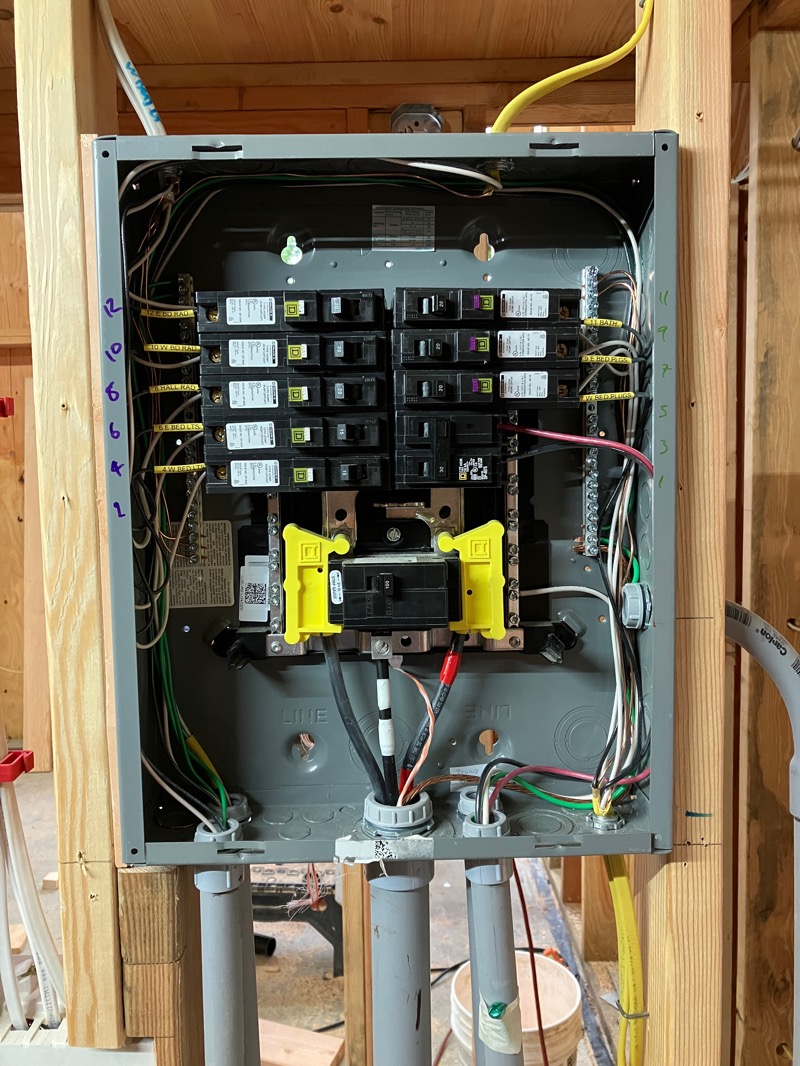 The main thing I see is a panel that is far too small.

Everybody thinks there's a percentage in "scrimping on panel spaces". And then 5 years later they're back here going "Help, I'm out of breaker spaces, what can I do?"

Breaker spaces are cheap. This problem is best solved when you buy the panel. It's an annoying speedbump before you put up the drywall, but it's a nightmare afterward. Given that

I do not "spend people's money" lightly, but absolutely I think you should replace the panel now (while it's still easy) with a 24-space or 30-space panel that will definitely cover all future needs. (yes I know you say right now that you have no future needs, but everybody says that at the time :)

I would use HOMeline type so a) you can reuse all the expensive xFCI breakers and b) the knockouts at the bottom of the panel are exactly the same. I would also revisit whether the main breaker is necessary - it's not if it's in the same building.

Once it's cemented into drywall the only option for more spaces would be to try to find a QO or HOM panel that has more spaces and uses the same box (such as the old non-PON version of the HOM20M100C) and swap bus assemblies, but that would probably mean having to replace all those xFCI breakers.

Other than that, the only thing I see is ad-hoc breaker numbering, which is bad if it's out of sync with the numbering on the real panel cover, but it looks like you went out of your way to do it correctly.

Last thing I promise, since you're building a house we are seeing people report getting higher offers on their house because they have a welder or RV outlet in their garage, because of electric vehicle anxiety ("if I get one will I be able to power it"). That's worth money to some. Like I say, "I'll never need more than this" is always untrue!

The only thing I noticed is the pair of NM cables below right.

the one is on its edge that will get flagged. NEC 334.30 flat cables shall not be stapled on edge.

it looks close for 1/4” of insulation inside on the NMB cables,

it looks like you removed the bonding screw for the neutral buss and you have the neutrals and grounds separated.

The can is usually sufficient to connect the grounding busses (with conduit the can is the connection if no conductor) but if you have some extra #6 I think that is better you have plenty of space.

4
Can I install a Subpanel (in a seperate building) using a 3 wire connection (2 hots and 1 grounded neutral)?
3
Should I connect the bare ground wire from the main panel to the grounding bar in the subpanel?
2
Is this panel ground rod correct?
7
Adding second Ground Bus to Square D Sub Panel - Grounded via wire or just the screws?
1
Is a Redundant Ground at Sub-Panel Permitted? Useful?
0
Grounding a 3-wire sub-panel in attic
3
How to add a main shutoff breaker to sub panel
8
Sub panel neutral and ground not bonded so why continuity between them?
0
Can a 100 amp sub panel be mounted directly to a metal building frame?