Why is an AFCI tripping when a particular light on a different circuit is turned on?

I have 4 GE AFCIs in a GE subpanel in my basement. Occasionally, when I turn on a bank of dimmable CFL lights via a CFL-rated dimmer switch, I get a trip in a particular AFCI breaker that's on the other phase. This doesn't happen every time, and it seems to happen more when the dimmer isn't set to full brightness. Resetting the breaker gets the power back on with no issues, but I'm tired of this.

I'm at a loss as to why a different circuit on a different phase is tripping, and even more confused why it happens only some of the time. These are not MWBCs, but obviously share the neutral in the panel feeder. Nothing else causes any other trips anywhere else in the house that aren't obvious, like 4 hair driers on a 15A circuit.

What's going on here? How can I find the cause of this?

The dimmers are spewing radio-frequency hash into the power line, which confuses the AFCI into a false trip. It makes sense that it's more reproducible on an intermediate dimmer setting, because that's when the dimmer chops the line voltage aggressively, not when it's fully on or fully off.

Bypass capacitors could help with this: 1 to 10 nF capacitors, X1/Y2 rated ceramic or film, minimum 250VAC working voltage rating. This diagrams shows three caps: between hot and neutral, hot and ground, and between neutral and ground.

The basic idea is that 60 Hz AC will not pass through these capacitors because the frequency is too low, but radio frequencies pass through easily. So the capacitors provide a short circuit shunt path for high frequencies, reducing how much of it spews back upstream from the dimmer. 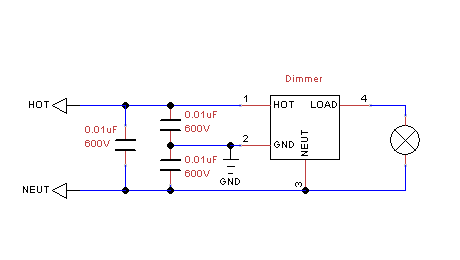 This looks simple, and it is, but it has to be done properly. Capacitors have long, uninsulated terminals, creating opportunities for short circuits if you're not careful.

Instead of these ad-hoc capacitors, you can install an EMI filter upstream from the light dimmer. EMI filters have a more sophisticated circuit which includes inductors.

One more thing: the Lutron dimmer company sells a filtering component that they call a lamp debuzzing coil.

After months of diagnosing an intermittent "nuisance" ARC fault trip on a circuit protected by a Siemens QA115AFC this thread gave me a hint and ultimately a successful diagnosis.  The afflicted circuit had a LED can retrofit "bulb" and when I removed that from use no more nuisance trips on Arc Fault.  The retrofit is a GE model and UL listed bulb, made in China of course.

The trip would only occur when the bulb was on (single bulb in the circuit) and then a larger current draw device was energized, immediately on energizing the higher draw device the breaker would trip.  What is weird is that immediately after the fault was cleared by resetting the breaker if you tried to reproduce the trip condition, lamp on and then energize higher draw device, the trip wouldn't occur.  It would only trip after some time elapses with the lamp on.  I think the Siemens device circuitry must monitor the slow leakage of current from the LED bulb driver and only after some amount has accumulated the condition is primed for a trip at higher draw.

The easy answer is to use dimmable bulbs. Cheap non- dimming cfl and led don't have an anti flicker circuit built in. Very likely the flicker is the issue. Those very small on-off voltage moves will cause an AFCI to trip. I agree, do not add any "ad-hoc" equipment to attemp to bypass the afci protection.

somewhere the neutral from the arc fault circuit and the lighting circuit are tied together. this happens often when a helper or homeowner have installed the wiring. if there was not an arc fault you would never know because it wouldn't trip a regular breaker. It could however over load the neutral. If you take the bulb out of the fixture and turn it on and it doesn't trip, than you will know that this is the issue

11
What could be causing AFCI breaker and GFCI receptacle nuisance tripping?
5
Is there a good way to hunt down AFCI receptacle nuisance tripping causes?
2
When I turn the light on/off on one circuit, it makes the light "blink" off/on on another circuit
3
Upgrading 2 breakers to AFCI, always trips
3
Circuit breaker trips when ANY light switch on the circuit is turned on
2
AFCI / GFCI Circuit failure
0
All my AFCIs trip as soon as load applied on a new panel
1
Consequences of repeatedly overloading a circuit and tripping the breaker