How can I hang a closet rod where there are no studs?

I'm planning on using 1.25" copper piping to create 3 closet rods that extend from one wall of my closet to the other. On one wall, the stud is in the right place. On the other wall however, the stud is only in the corner and then the window framing gets in the way. And in case it matters, the wall in question slopes inwards 8 degrees.

What's the best way to attach the copper pipe to this wall? Should I just run three 2x4s off the corner stud? The problem with this approach is that the 2x4s would only be attached to that corner stud -- they won't cross another stud that I can secure them to as well.

Here's a picture so that you can see what that corner looks like with the window. In case it matters, the window is framed by 1x4s, and the framing protrudes from the wall (by around 0.75", or the width of the 1x4). 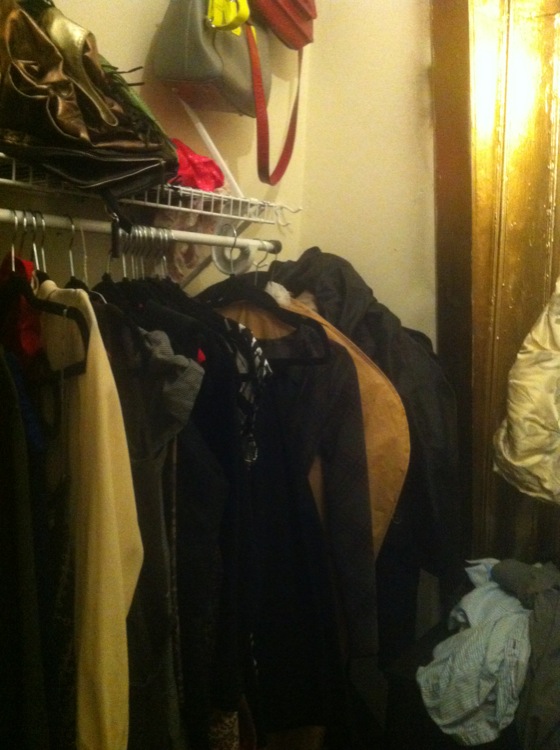 It is possible to fabricate some sort of support no matter what, it's more about what is the most expedient method of support that is not completely ugly. As mentioned by maple_shaft, there would typically be an intermediate stud between the corner and the window. It is conceivable that 24" spacing is being used and the only structure is at the window and at the corner. The window would typically have a least 3" width of rough framing at the side, mostly behind the trim, but allowing for frame thickness and rough-in allowance, there should be a bit of framing behind the wall finish you can nail into right along the edge of the trim. Even if completely behind the trim, you could, for instance, use a 1x6 support and dado it into the trim so that it has positive attachment to the underlying framing.

So now you have two points of support, one either side of the clothes pole. A 1x6 will be adequate to span between these points and look compatible with the trim. I agree you should use a proper clothes pole instead of copper. I assume it is the hard type that is somewhat rigid. (The soft type is obviously unsuitable) Even if it appears sturdy initially, under constant load, it will slowly bend over time (creep deformation) until it pulls out of it's support and falls.

11
How far apart are studs?
3
How can I mount heavy stuff on wooden studs?
1
How can I hang a wall mount on misaligned studs?
2
Can I hang cabinets and shelves on metal studs?
2
How should I build a low profile stud wall in a basement?
1
Can I use lag bolts when mounting heavy shelf units through 2 layer drywall?
1
Where are the wall studs?
0
Is there a limit to length of notch cut in “rear” stud in staggered stud wall?
2
How can I mount a TV with widely-spaced studs and weak wallboard?
6
Do lag bolts need to be centered?