I am hoping to tie into a 125 amp subpanel in our garage that I used for our house remodel. There are many breakers/circuits in the subpanel, so don't know if this will fly. The subpanel is supplied by a #2 copper wire (2/3 Romex) with a 125 amp breaker in the main 200 amp panel. Will it be possible to tie into the subpanel or do I need to run a separate line from the main panel? Trying to avoid making the run from main panel as it will be about a 50 foot run. Thanks for any thoughts/suggestions you have.

The list of current breakers in the subpanel are below. The charger will be programmed to run non-peak from 12 am to 7 am, so only a few of the circuits will be energized at the same time (refrigerator and possibly some lights and outlets).

Description of Breakers (from bottom right to top): 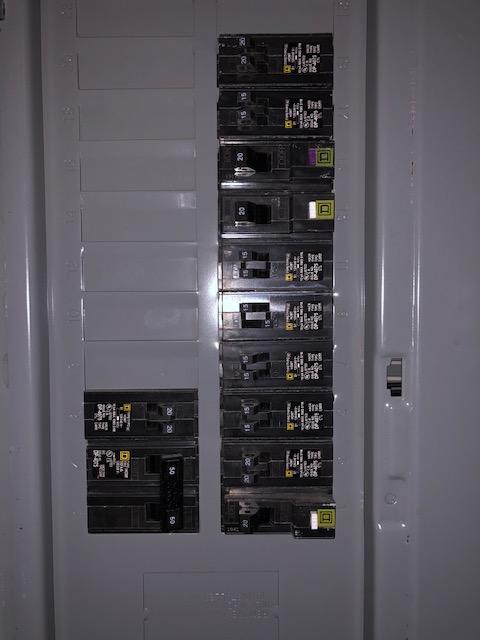 First, EV charging tech is pretty slick, and allocates charge current "soft", i.e. the current is programmable. The main job of the Tesla Wall Connector is to tell the car how much current it is allowed to take. It's not actually the charger. Really.

And if you get a second EV, the two EVs will share this allocation using technology everyone else calls "Share2". It's very cool.

But wait. How much can your house support?

You described all your breakers, but unfortunately that was a waste of time. You must follow a procedure called a Load Calculation which is defined in NEC Article 220. That procedure does not care much about 120V breakers.

Your municipality will have a worksheet which they derived from Article 220. I find a great deal of inconsistency among those from municipalities, so I would ask your own local municipality for their rules (they may have a worksheet). All of them include a) 1500 VA for each of your kitchen general appliance circuits, and laundry room circuit and b) 3 VA per square foot of finished space (so not attic or unfinished basement). Fixed-in-place 120V loads (disposal, dishwasher, built-in microwave etc.) take their nameplate VA (volts x amps). Then 240V loads get a demand factor applied.

Anyway, here's the thing. You must do the Load Calculation twice:

The lesser of the two will indicate the amps you can commission when you set up the Tesla Wall Connector.

Note that Tesla Wall Connectors don't actually use neutral (their recommendation of NEMA 14-50 is so you can also use it for an RV, which does need neutral). You are better off hardwiring if you can.

Based on the breakers you have I would say yes you have the ampacity to add another 50 amp load. your only large load the oven and even with this we don’t just add the breakers with 200 to the main I might revise the answer if all electric home as far as heat or if an on demand electric water heater was in the main panel then my answer would be maybe to no. With the load in the sub there is enough available with a 125a feeder.

2
Can I add induction cooktop and electric wall oven to my kitchen with this panel?
1
Loads for sub panels from 150A split-bus main panel
1
Frigidaire Electric Range trips arc-fault circuit breaker in another room
0
Running Wire to an Outside Load Center
0
Sub Panel in detached 10x10 bldg(welding shed)
1
Electrical for Whole House Remodel
1
Can I Replace This Junction Box with a Subpanel?
2
Wiring for EV chargers in detached garage
2
Does my electrical service have capacity for an 80A EV charging circuit?