Can I replace a single light switch with a 3-way switch that can individually control 2 lights in a fixture?

I have a ceiling light fixture with 2 bulb sockets. Right now it's controlled by a single 2-way switch (on/off).

My idea was to install a 3-way (or possible 4 but not necessary) switch that can control each bulb independently. The point to that would be in being able to individually control two contrasting bulbs, ie: 1 5000k and 1 2700k to set different 'scenes' if you will.

Ideally I'd like to be able to do this without pulling the wiring or adding an additional wire and to instead mod either either access point (light switch or light fixture).

Logically speaking, one can get 4 states with 2 wires (00,01,10,11) so it stands to reason that it is possible but would be a matter of what components to use and if there are off-the-shelf solutions.

Your analysis about two wires makes an assumption that is forbidden in residential electrical work. One of the wires in a standard fixture is the neutral whose state cannot change. It must always be connected to the other neutrals in the system, connected to the main electrical panel and ultimately to ground. If 1 reresents connected, the white wire is always in the 1 state.

How to do it

If you want separate controls, you need a separate wire to power (carry the hot current) to each bulb. A single neutral (white) can be used.

If the power is presently comming into the switch box from the electrical panel, and then being routed to the fixture, the standard way to wire this would be to run a three wire cable (white/black/red) from the switch to the fixture and to use a double switch, such as this type. 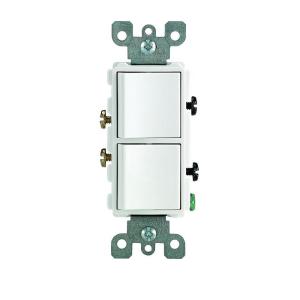 At the switch, the white (now marked black) is the incoming line to both switches and the red and black are attached separately to the outgoing terminal on each switch.

In either setup, the switches are independent. You can turn on either, both or neither.

There are double throw switches that would allow you to have one or the other or neither, but not both. You still need the three wire cable at the switch site.

3
How can I replace a 4-way mechanical switch with occupancy sensor(s)?
1
Can I convert a single circuit with multiple lights/1 switch to control 1 light/switch
1
How do I add an independently controlled light fixture to an exiting three way circuit?
1
Turn Lights On/Off Without Having to Hit 3 Switches in One Room
1
How to Wire New 1 Way Switch From 2 Existing 3 Way Switches
8
Why would a light fixture be incompatible with dimmer switches?
2
Wiring confusion with 3-way switches that control 2 lights
1
How to wire two separate switches off one main 4-way switch
1
Why does my 3-way, switch looped light not work properly?