What is the difference between a framing hammer and a claw hammer?

What is the difference between a framing hammer and a claw hammer? Can they be used interchangeably?

As others have said, a framing hammer is a specialty claw hammer.

So what makes it different? First, weight. A framing hammer is typically 20-32 oz, compared with 10-16 oz for a "normal" household claw hammer. That helps it pound large nails in only a few blows. Related to that is the much longer handle on a framing hammer.

Second is the face of the head: it's waffled to prevent slipping off the nail head, helping prevent bent nails. A regular claw hammer will sometimes have a textured face but not nearly as pronounced, and the face may also be smooth. A regular claw hammer often also has a domed face to allow a skilled hand to sink a nail below the surface with minimal surface damage: that's a feature you won't see on a framing hammer.

If you're only building a garage, I'd recommend using your regular hammer rather than buying a framing hammer. (Or best of all, just go rent a nail gun!). For inexperienced carpenters, the time spent hammering will probably not be what slows you down. Also, the framing hammer is tiring enough that after a couple hours you may actually be faster with a smaller, regular claw hammer.

If you do get a framing hammer I recommend a lighter one. You'll work faster when you use it, you won't lose much power over a heavier hammer, and you'll feel much better on the second day. In 2010 if you hammer enough that a 32oz hammer makes a difference versus a 24oz hammer, you have a nail gun anyhow.

In my experience, framing hammers are generally larger and heavier, have a straighter "claw" and are more suited to the demands of framing. They provide less accuracy but more force, which is nice. And the straighter claw is good for prying boards apart. If you only have one hammer, you want a claw, but if you are doing a lot of framing, a framing hammer is a nice addition. 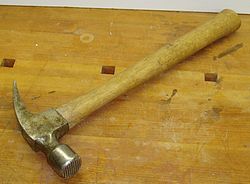 Standard hammers have a curved claw:

Weight and means of manufacture have nothing to do with the differences in versatility of these two hammers. Notice the juxtaposition of both of those, in both these examples, compared to the other answer's requirements; these are just a crappy rip hammer and a (very nice) standard one.

Length, weight and tang are key factors but I prefer rip hammers that can double as a crowbar, over every other consideration. It's not the size...

Framing hammers typically have heavier heads and longer handles, and the face is usually not flat (I think the claw is less curved as well).

Framing hammers are a specific type of claw hammer.

They often have a textured head, which will reduce the liklihood of skipping off the nail, but will almost guarantee that you mar the wood that you're nailing into. It can also result in the nail being driven a little bit below the wood. As such, it's really not useful for finish work.

They also tend to be larger, to help reduce the amount of swings needed to get the nail in (they're really not intended for delicate work), and have a straigher claw to get between two laminated timbers to pull them apart.

If you're only going to buy one -- get a general claw hammer, but I'd recommend using some sandpaper to rough up the face if it's polished smooth.