Can I splice hard PVC with soft PVC?

I am splicing a PVC pipe identical to the pipe on the left of the image. I will insert 3 inches and use a pair of joints like the one that appears on the right of the image.

Hence I'm guessing it's ideal if I splice using the exact same pipe, the one on the left.

But during an experimental dry run before the actual cut+splicing, the pipe (on the left) and the joint (on the right) were already quite fused. There was no cement in sight, and I sanded to bevel, and wiped with a rag before insertion. They were so fused it took a pair of pipe pliers to separate them. With the actual pipe, I won't have the luxury of twisting with pliers to undo the dry run. 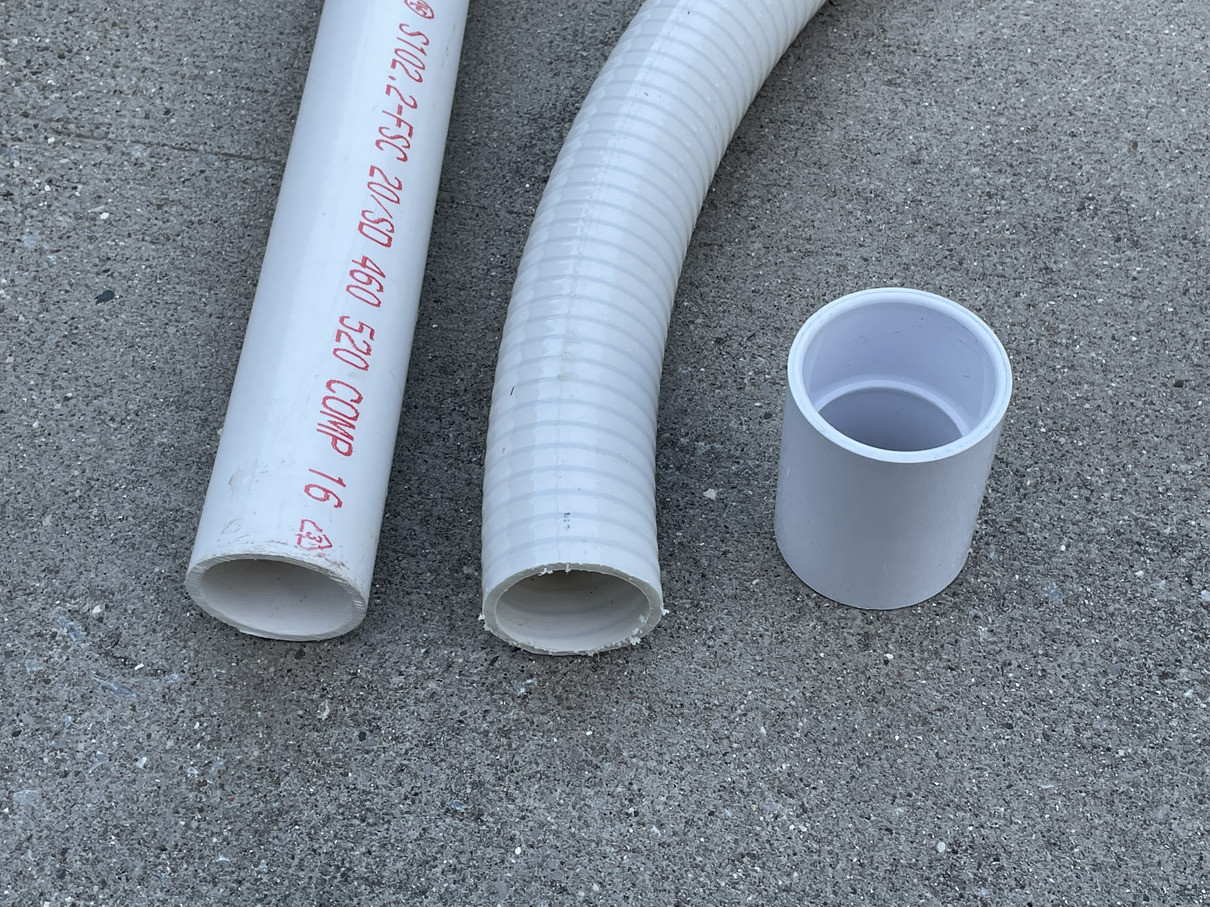 This makes me wonder whether it would be alright to use the soft pipe in the middle of the image for splicing. This setup is under the sun 365 days a year, but all three are, I presume, appropriate for full-on weather exposure.

You cannot mix the schedule 40 PVC (rigid) and the flexible conduit legally. You would need different fittings to adapt the different pipes as mentioned in the comment by @Ecnerwal.

A dry run is not necessary- for the very reason you experienced. If you push that coupling dry all the way onto the pipe it will be very difficult to get it off. The pipe glue actually acts as a lubricant so the fittings slide on the pipe easily (but only for a short time- the glue sets fast).

Typically this is done by measuring the needed piece of pipe. I can't tell what size your conduit is, but, you can measure from pipe to pipe and subtract about 1/4" for each end (the repair piece of conduit will not fully reach the existing pipe because of the stop inside the coupling). If anything, cut it a bit short- conduit is very forgiving.

Often with conduit priming is not necessary. I would say it depends on what type of glue you are using. If it is regular clear PVC cement then you would be better to prime it- priming will give a better bond.

1
Can I replace a section of copper pipe with flexiable PVC?
1
How can I avoid excessive junk on inside junction, when cementing PVC sprinkler pipe?
3
Can I thin thick PVC cement with primer?
1
Relocating the PVC from behind dishwasher
1
Soldering soft copper to hard fitting
3
PVC toilet flange replacement problems
1
what is the correct procedure to patch up cinder block hole with plumbing?
2
Can I extend my sump pump outlet and dig it down in the ground?
2
Using primer on electrical PVC conduit