How do I check if my outlet's ground and neutral are connected correctly?

When we moved to a new house I noticed a strangely wired up outlet: 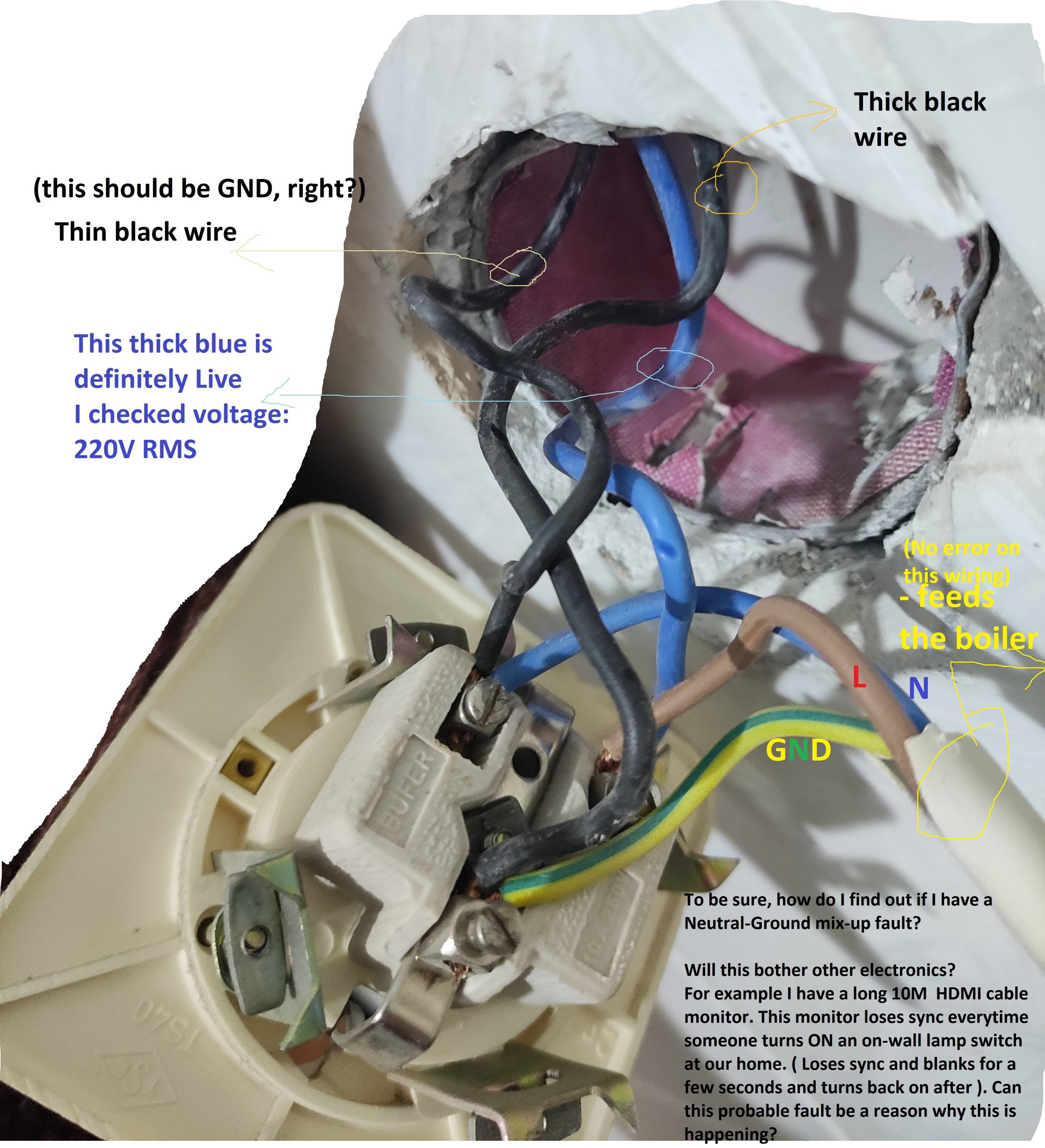 For this outlet, I am really suspicious whether the grounding is messed up and mixed up with the Neutral.

Normally Neutral and the Live wires are the thicker ones right? If that is the case this outlet is violating that and the whole houses ground connections will have leaking voltage right? When I measured some of the grounded equipment I saw the line's tester's light is turning on and saw some nonzero voltages(for example my PC case).

Apparently to save one outlet somebody directly used that outlet and extended a wire into the balcony which feeds the central heating boiler of the house. If the wiring is wrong how is the breaker not tripping? Isn't this extremely dangerous the boiler sending its current back from the ground path?

-- To be sure, how do I find out if I have a Neutral-Ground mix-up fault?

On a side note, will this bother other electronics? For example I have a long 10M HDMI cable monitor. This monitor loses sync everytime someone turns ON an on-wall lamp switch at our home. ( Loses sync and blanks for a few seconds and turns back on after ). Can this probable fault be a reason why this is happening? For reference the German standard for electrical wiring (my country uses the same Page 14-15 of : [this IEC related document] 2 ): 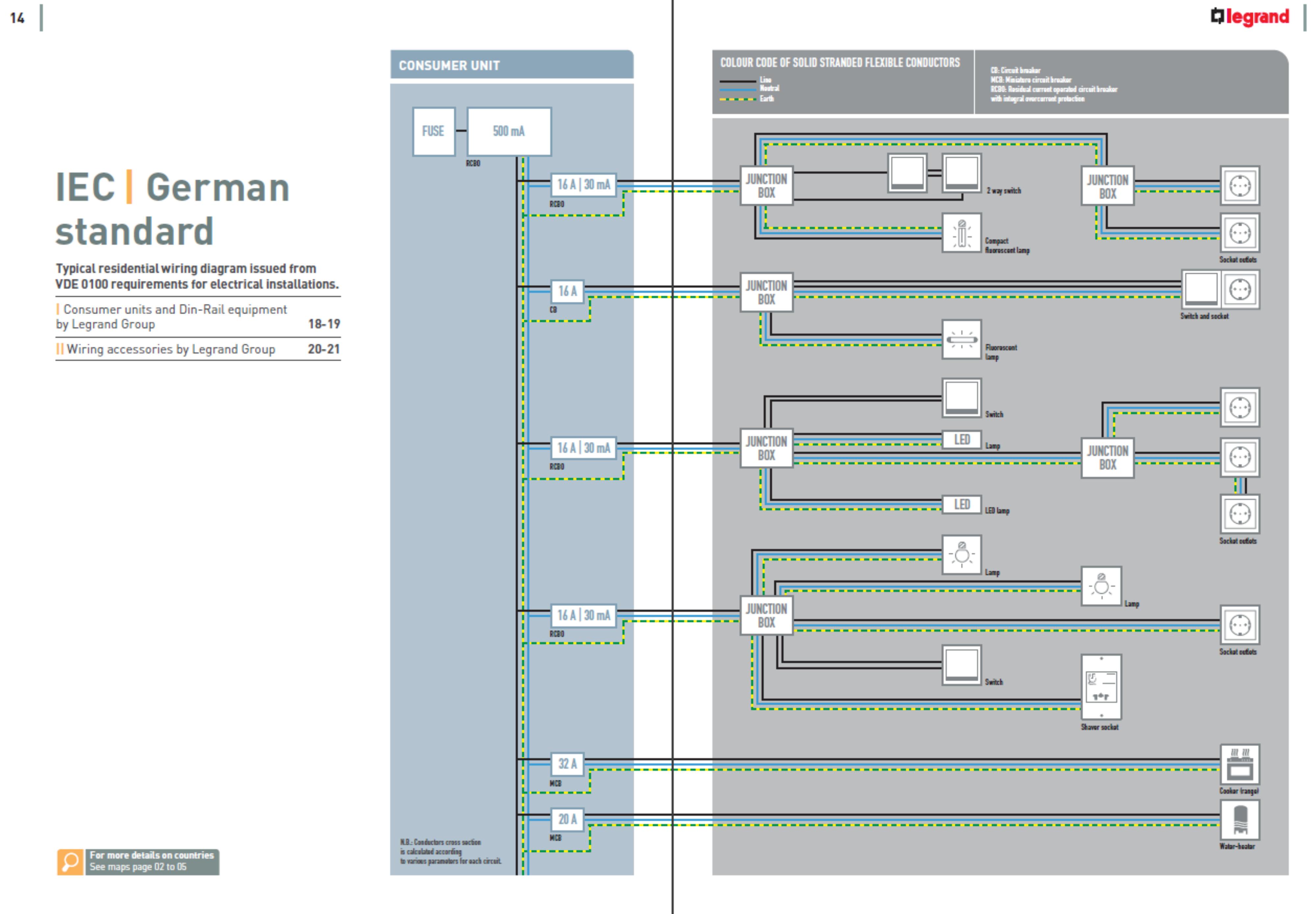 ground neutral
Share
Improve this question
edited May 18 at 12:41

Neutral is not Earth

Putting active daily current on earth is out of the question.

I see you using 'GND' to describe "Ground" as you call it, which tells me you've cut your teeth in small electronics. That is a completely different world. In electronics there is no proper earthing, and "GND" is simply the negative/Vss/backplane/common that is wired to everything as the common return loop... which would make it more like AC mains "neutral".

I gather you're from the Euro-system of wiring, which means, you call that thing EARTH. That is a relief: over in North America we call it "Ground" which makes it much harder to RE-train electronics folks. So keep calling it EARTH, or at least as "safety ground" as a different thing from GND.

I never call it GND, and I'm a Yankee.

Also unlike electronics, neutral is not "common" either. In AC mains we are running the wires at hard ampacity limits all the time, which means, each live supply wire MUST have a dedicated neutral wire that returns only its current. We can't be careless and treat neutral like a common/backplane, because then, 1 neutral might end up returning current for 2-3 live wires, and it would be overloaded! Neutrals don't have circuit breakers - they don't need breakers if wired correctly. (even on an RCBO, the neutral goes through the RCBO for RCD sensing, but does not have its own overcurrent detector).

Or straight green, or bare. This is a world standard and is largely effective outside the old Soviet bloc. Even the Yankees agree on it!

Very much unlike neutral, all earth wires should be tied together in all locations. Since earth doesn't carry current except during fault conditions, we don't need to worry so much about thermal overloads from continuously carrying high current. Service current is never on earth.

Find out about local legacy neutral and earth colors

I've never heard of a country where they used the same color for both neutral and earth at the same time. However there have been changes.

So you will need to ask local experts for the old wire colors, and see if that explains what you see.

Prepare for the possibility that your old work was done before earthing became a standard, and there may be no earth at all. Also, some locations used metal conduit for wires, and in that case the metal conduit is typically a valid earth!

Test the neutral by isolating it

Neutral has an equipotential bond with earth, either at the panel/consumer unit or on the power company side of it. This is to keep voltages at a reasonable voltage and to suppress transformer leaks, lightning etc. It also gives a current path for fault current to complete its circuit. Do not treat this as a license to treat them as equal or to tie them together elsewhere!

Now there should be no connection between neutral and earth. With the circuit breaker off, live+neutral (together) should be isolated from earth.

You can also try energizing the circuit with neutral disconnected. In that case, on a properly isolated circuit,

If you find yourself with an earth wire which is not plainly marked (e.g. it is the wrong color, or the former earth color is now a neutral color etc.), then wrap it with green or yellow/green electrical tape at the least. That is not authorized by the electrical code, but it will make it clear what it's being used for. Identify the wire carefully and always mark both ends of a wire the same, at the same time.

An RCD in circuit should have tripped, had neutral and ground got swapped in the outlet in question.

Here's a way to check for the swap.

A positive result in the above two checks would confirm the swap.

Appears it was used in Czechoslovakia (mid 1970's for unearthed fixed wiring) and never used anywhere else on the globe.

This standard seems to be messy. The contemporaneous standard for earthed fixed wiring included both:

There is no easy way to diagnose a swapped neutral and earth.

Other tests involve disconnecting wires at the switchboard and should be done by an electrician.

NOTE THIS IS A WRONG ANSWER

As per comments, this tester does NOT show ground/neutral issues. Leaving for future readers.

There are a bunch of devices available for testing a 3 pin power socket.

Often called receptacle/socket tester or less nice "idiot box/tester" they're a simple plug-in unit that shows if all three wires are correct from the front. There's no more risk from using these than from plugging in a cable, compared to pushing probes into places hence the "idiot" term.

Example unit, though they come in many designs, they all have 3 neons and a chart to decode the lights. Mine's round. 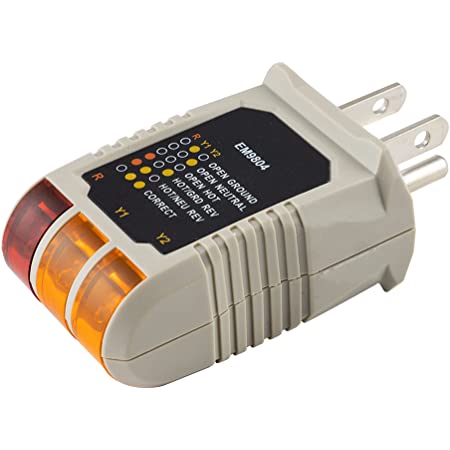 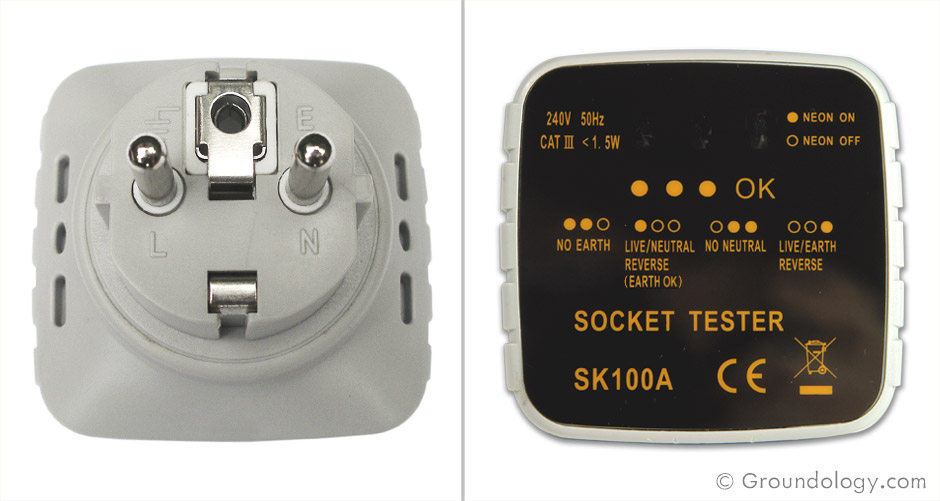 You'd need to test every wall-plate at a minimum, and every socket on every wall plate would be wise. Fortunately a test is super quick.

The "idiot" name is imprecise - these are cheap, easy to use and interpret, and form a useful quick tool in the electrician/handiperson's toolbox.

Not the answer you're looking for? Browse other questions tagged ground neutral or ask your own question.

0
verify if the Ground cable is connected to Neutral cable
1
What are the risks of sending low-current neutral through the ground wire?
2
Sub Pabel Install, NEC 250.24 question, Mixed ground/neutral at main
2
Why is neutral wired to ground at this switch?
1
Open Neutral Circuit yet all circuits outlets and wiring appear connected
3
Understanding ground to earth and neutral, trying to make my home safe
5
Why am I measuring 60v at some outlets?
2
How to find a neutral to ground short on my main panel
0
Eliminate Neutral To Ground Fault Indicator With Resistor For Inverter
0
Outlet reads open ground even with the ground connected