Switch with weird voltages and wiring

I went over to my parents' house and am trying to fix a combination switch. The old switch stopped functioning recently and my Dad had removed it. I do not know how it was wired previously but my Dad mentioned that it was non-standard. The old piece was a double toggle with two single pole switches similar to this product.

He tried installing a new switch but could not get both circuits to work.

I then attempted to diagnose the problem by reading voltages of the wires in the box. I first measured all wires in relation to the ground and had 4 at 60v and 1 at 0v. This didn't make sense so I started measuring the difference from each wire systematically. The annotated picture below is what I found: 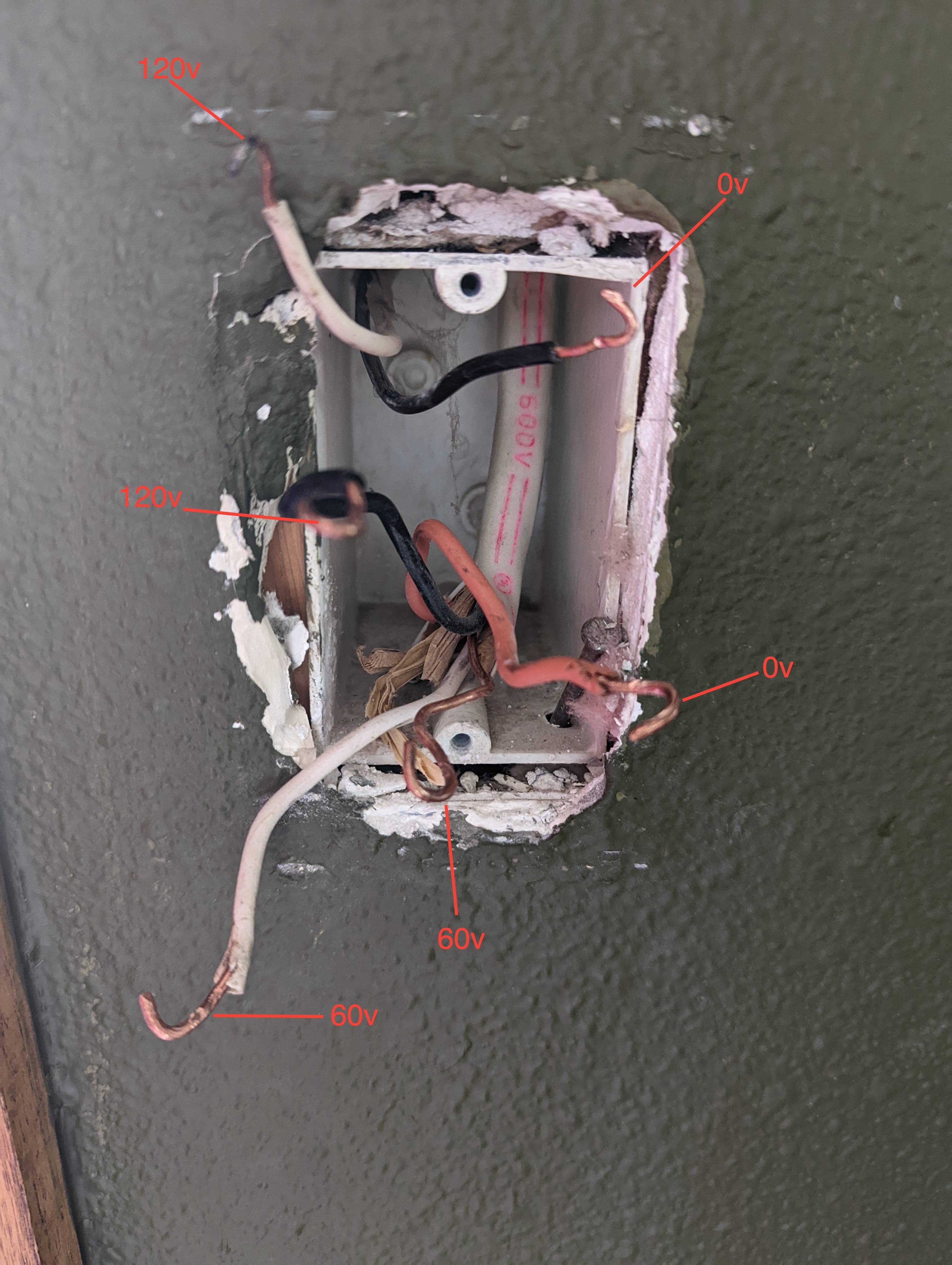 I have a couple of questions now:

Why would there be 60v on the white neutral and the ground from the 3 cable romex?

How should I wire up a new switch? (It is the same product that was linked previously)

electrical wiring lighting
Share
Improve this question
asked May 12 at 20:44

So what you have here is almost certainly a switch loop and a three-way switch.

The top cable /2 white is the constant hot from the fixture and the top cable black is the switched hot. Those go on one switch and the white wire needs a marking to show that it’s not a neutral conductor. Wrap it in black electrical tape with the power off.

The bottom /3 cable is a bit more tricky because there’s a lot of options. It could be part of a three-way switch circuit or it could be intended to send constant power to more than one other fixture in addition to being switched. It could also carry a neutral. But it’s most likely a three-way switch.

As to the weird voltages — that’s almost certainly phantom voltages due to having constant power in the same cable as non-constant power. If your multi-meter has a mode that is labeled as “low impedance” then you can use that to get rid of the phantom voltage and get a more accurate reading.

Ask your dad if there’s another switch somewhere that also turned off and on the fixture of one of the switches you’re trying to replace, and that will point to a three-way circuit. I know you said that it’s two single pole switches but there may have been a three-way at one time.

I suspect you have two independent switch loops.

But let's put that to the test.

I think there are 4 pairs of wires that should be tested. (crossing cables is a mistake).

Once you have a socket, turn the main breaker on and plug in a big load like a hair dryer or heater. The reason for the load is to provide some resistance so we don't accidentally create a dead short. Under this condition, also go operate the other 3-way switch and see what happens.

From there you can try to figure out what you have.

If both cables control lamps, then they are independent switches. They make "tandem 3-way switches" just like your old switch, but with 3-ways in one or both positions. Most of those have a "common side" with a tab or blade pull-out, since they are expected to be fed from a single hot wire. You will need to break that tab or pull-out so the switches are fully independent. Never cross wires from 2 different circuits.