Can I set a portable AC unit back in a dormer window?

My office is on the 3rd floor and it's pretty hot in the summer. I wanted to get a window AC unit, but the windows are dormer windows, so there is no outer vertical surface on which to mount a support bracket (diagram below). Basically, I'm having the same problem as this person. 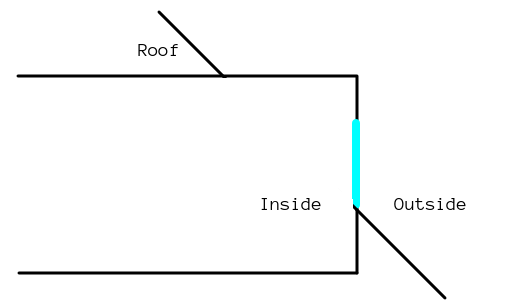 I want to get a portable AC unit, but they all claim to need 20"+ of clearance on each side. Can I set the portable AC unit back in the dormer, closer to the window, and let it blow down the "hall" of the dormer? Will that give it enough airflow on all sides?

For reference, below is a picture of the attic dormer. Here is the AC unit I am looking at, and here is the doc (page 6) where it talks about the space requirements. 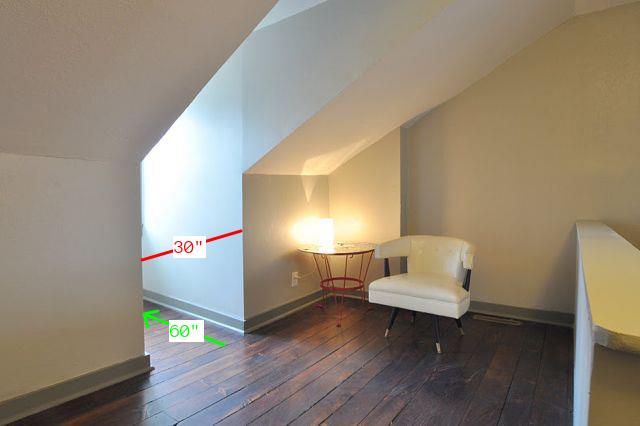 Since your window sounds like a replacement window where the tracks encroach on the opening instead of being placed fully within the framing, I'd suggest that a piece of 2x4" on the inside sill, and possibly another on the outside sill, plus a piece of foam between them to insulate/keep creepy-crawlys out will give you a nice surface to sit the AC on without an external support bracket.

You might still need something to keep the window sash tight against the top of the AC unit to keep it from pushing the sash up and tipping in or out.

I've had a similar problem: the window was too tiny to fit a window AC unit.

The problem with portable AC units is they have only one pipe to the outside. A normal window AC unit has one airflow through the condenser, which is outside the room, and another airflow through the evaporator, which is inside. But the portable ones suck air from inside the room, blow half of it through the condenser and the other half through the evaporator, and throw away the hot air from the condenser outside. New hot air from outside has to seep into the room to replace the air that's blown out. So the AC unit blows cold air in your face, while hot air seeps under the door, and it's really inefficient.

So I got a portable AC unit that's roughly the width of my window, put it on a support so it would be at the proper height, and built a small frame stuck to its back so the evaporator fan sucks air from outside and blows it back outside. 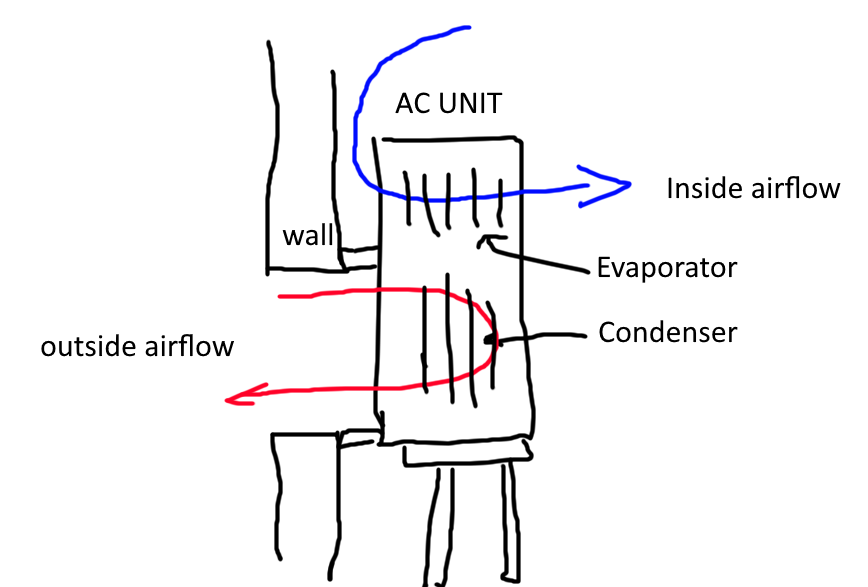 This increases the efficiency to about the same level as a window AC unit, which is much better.

Oh, I forgot to answer the question. The reason they tell you to leave space around the device is to prevent it from blowing out cool air, sucking it back in, and blowing it outside. With the above, it doesn't happen.

trim (or adjust) the legs so that they reach your roof, if you roof is some fragile material (most are). trim them further and put a horizontal stick of pressure treated timber at the bottom to spread the load.

Not the answer you're looking for? Browse other questions tagged hvac windows air-conditioning support dormer or ask your own question.

0
How to support a window AC unit for a dormer window?

5
What is the maximum angle I can set my window AC unit?
1
How can I vent a portable A/C unit through bars on a window?
3
All outlets on one 15-amp circuit, need AC unit
0
How can I plug a hole cut in a window pane for a portable A/C unit?
1
Can I use a portable air conditioner with a casement window?
1
Window AC in a Dormer
1
Considering portable a/c vs our old Central Air, from 1992, in 2 story, 2300 square foot house, High Desert
0
How to support a window AC unit for a dormer window?
0
Idea about fitting flyscreens on outside of inaccessible windows
0
How to seal this type of window for portable air conditioner?