LED "Can" lights not working all over my house

We moved into our house after someone flipped it 5 years ago. The attached photos are from LED lights that are all over the house. Some work intermittently. Some not at all. I can't seem to remove it from the cieling to see what I am actually working with. I've loosened the screws but it refuses to twist out. 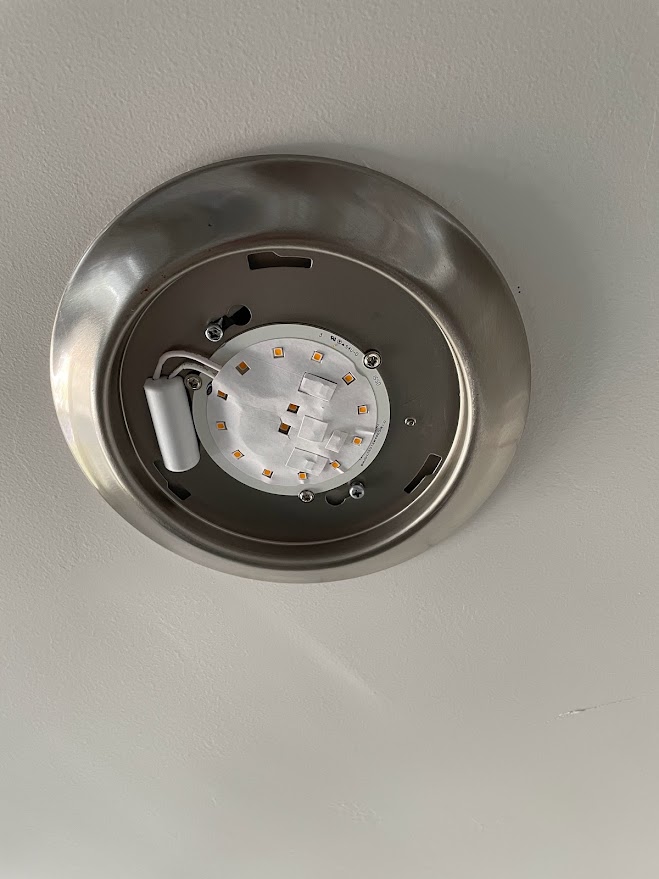 lighting led recessed-lighting
Share
Improve this question
edited May 10 at 16:52

I realize you're used to buying "light bulbs" - just as your grandfather bought "vacuum tubes" for the radio and TV. However, then transistors came along, which were a solid-state, semiconductor that did not burn out. Today of course we take transistors for granted. The same thing happened in lighting - we went from bulbs which do burn out, to solid state, semiconductor light emitters which do not burn out.

But LEDs can't run on AC power, they need a power converter or driver to convert AC to DC. This creates the opportunity to cut corners and destroy the reliability of LEDs, and given that this is a flipper you can bet that these are el-cheapo fixtures off Alibaba/Amazon Marketplace/eBay. Probably a code violation to even install them, since I don't see a UL or CSA or ETL stamp on them.

All that to say, don't let the flipper's corner-cut make you unfairly judge integral LEDs. They are fantastic if you buy quality.

And by the way, "screw-in LEDs" have their own thermal problems - it's impossible to have a viable heat-sink on a "bulb sized" package, so the LEDs can't cool reliably - especially in an enclosed dome fixture. This fixture displays a very correct design model - as it uses the entire metal back plate as a heat sink for the LEDs.

To remove the fixture, don't disturb the 3 screws which pin the LED emitter board to the back plate. Do loosen or remove the 2 screws in the slots. Then you just need to overcome the stickiness of the paint. Nothing else will be holding it. There should be a standard octagon (round) box behind it.

Is it possible to replace only the electronic driver on a nice integral fixture? A nice fixture, yes. Not this one. Heck, some builders even socket the driver, which is the thing that needs socketing really. 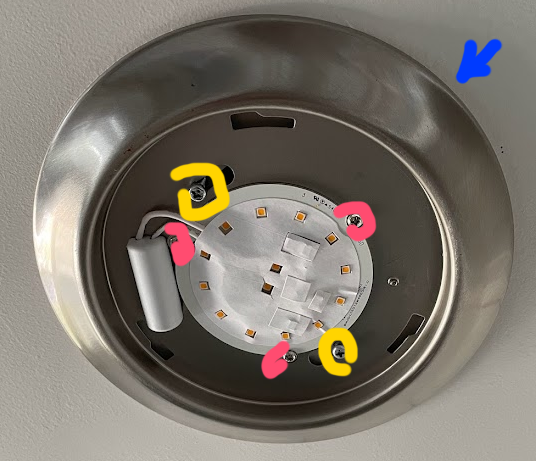 If it pulls out, congratulations. If it does not, you're in trouble, because there are no other visible screws for the purpose of fastening it to the ceiling, so that could mean whoever installed it glued it to the ceiling, probably with silicone caulk or MS. In this case, you're gonna have to spend a while artfully slipping the blade of your box cutter around the perimeter to cut through the glue without making a disaster on the painted ceiling.

I'd recommend starting with a fixture that is somewhere like a corridor, where screwups will be less noticeable.

You can also remove the 3 screws in red, maybe you'll find the secret screw to take it off the ceiling, who knows.

LEDs work fine when hot, but not for long. To last, they need to be cooled. So you see the brand new light working well, and it is cheap, but the effects of cheap cooling (or no cooling) only show up after a few months when it mysteriously stops working. Cheap bulbs are easily replaced, but this type of light needs a bit of labor to install, plus the hole in the ceiling, so it's not worth it to go for cheap.

First there needs to be thermal paste for good heat transfer between the circuit board and the sheet metal. After you remove the three red screws, I'll bet you will find just a tiny drop of thermal paste under the LEDs that survived, and none behind the ones that fried.

Then, on this type of fixture, the heat from the LEDs has to travel horizontally through the steel sheet metal to the edge, and that doesn't work. First, steel doesn't conduct heat very well, that's why heat sinks are usually made of aluminium. Second, heat travels efficiently through the thickness of sheet metal, because sheet metal is thin so it doesn't have very long to travel. But in the other direction, there is much more distance, and little cross section. So the round outside part of the light, which should be the heat sink, isn't.

Some lights have a heat sink at the back to dump heat in the space above the ceiling, like the one below. That only works if it's not full of fiberglass. 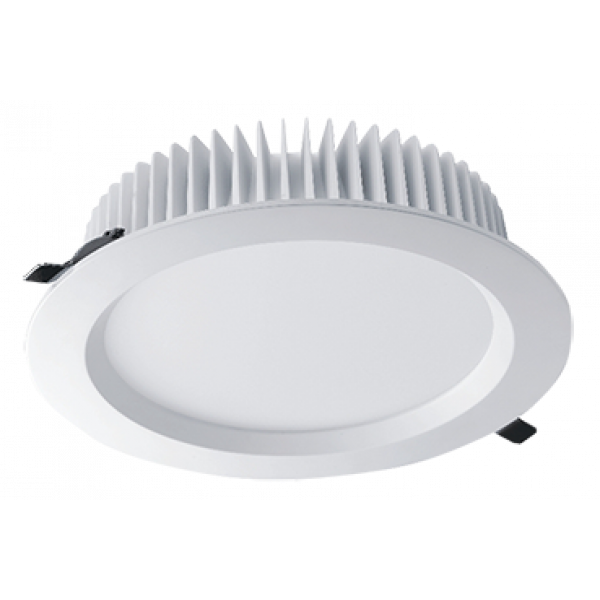 Before deciding on a replacement, you have to check what kind of hole you'll find under it. Then decide whether you want a round mini panel like in the screenshot above, or perhaps some GU10 downlight, or something else. If you have a lot of holes, it's worth it to find something that fits, or at least lights that cover the holes.

Not the answer you're looking for? Browse other questions tagged lighting led recessed-lighting or ask your own question.