Is it wrong to connect multiple J-bends (traps) together?

My tenants recently told me that they have constant clogging problems with their bathroom sink and had me come take a look at it. I found the following 3-trap configuration: This was done because the sink is too far to the right for it to mate with the drain in the wall via a standard p-trap configuration. This seems like the wrong solution to me (it was done by a (non-plumber) contractor when I was living out of state). A guy in the plumbing section at Home Depot didn't like it either and suspected that it would lead to clogs.

I replaced two of the traps with one of those flexible pipes and was able to make the connection with the remaining trap being rotated slightly - not ideal, but I'd suppose that two (roughly) 45˚ bends are better than what was there previously. There seemed to be no alternative way to connect the sink to the drain given the 1-1/4" pipes and fittings available at HD.

Much too much up and down! You want a P trap with an additional angled connector toward the wall.

The first down and up from the sink drain is correct. That is the P trap. It should end with a horizontal leg pointing toward the wall (an L shaped piece). 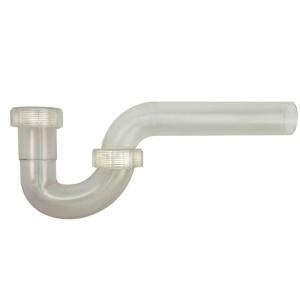 This will not line up with the opening in the wall because the drain is offset. Therefor that leg will run a distance and then will use an angle to bend it back toward the wall.

You could use a right angled slip joint connector (running horizontally). 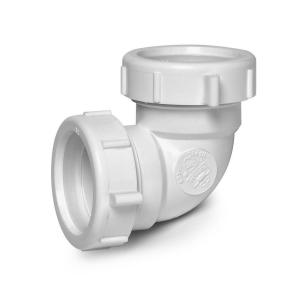 A 45 degree angle would be better (the less sharp the bend, the less likely to stop up). However it may be hard to fine a 45 degree slip joint elbow. You could use standard pipes and elbows, but these would require glued joints rather than slip joints.

Finally there should be a straight run from the angled connector to the wall connection.

You can rotate the P part of the trap so the L leg coming off the P is parallel to the wall (assuming you are using the 90 degree elbow; if not, adjust accordingly). Then the elbow turns the drain toward the wall. Another horizontal run carries the drain back to the wall.

It is easier done than described.

LOL, yes that is incorrect! The two trap version (S trap) used to be legal, but no more. The "snake trap"(??) was never legal. It is certainly more prone to clogging, but I'll wager there are other contributing factors.

Correct fix. Keep the first trap out of the sink and the last arm going to the wall. Discard the other two traps. Remove the trap arm adapter at the wall. Install a flat 45 degree ell on the pipe in the wall such that the ell outlet is pointing to the sink trap. Add a short length of pipe to the ell, then a trap arm adapter. Reinstall the trap arm to the adapter and connect the downward facing part to the single trap. Check for leaks.

If you have multiple sinks in the kitchen only, with outlet drains separated no more than 30", place the one trap in the center then take tubular elbows from the outlets to a tubular tee then to the trap. Multiple sinks to a single trap is not valid for vanity or bathroom sinks.

Note: Plumbing code also prohibits this, for example: California Plumbing Code 1004.1 “No fixture shall be double trapped.” Though a second vent could make the "problem" go away.

Google s-trap, this is a snake trap or s trap. The water will get sucked out of the ptrap allowing gases to come back into the home which would be very noticeable & yes it will be more prone to clogs but the gases are the main thing. Ptraps must have fluid in them or sewer gases come back through to the home. EVERY drain needs a ptrap under it and a vent to give the prap air, if an S trap is installed down flow of the ptrap after the vent it may suck the water out of the ptrap.

Not the answer you're looking for? Browse other questions tagged plumbing bathroom pipe drain or ask your own question.

0
What can I do if the sink tailpiece is too close to the wall?

1
Should I add a grease trap to a long drain run from the kitchen?
0
Tailpiece too long for new chrome J-Bend in kitchen sink drain repair
1
Is bathroom sink pipe configuration up to code and does it have a trap?
1
Sewer backup through basement floor drain after heavy rain
0
How to connect plumbing to a trap adapter which is already installed?
0
Garbage disposal drain is slightly higher than drain pipe
0
Will a doubled P-trap cause problems if it has a vent between the traps?