Do I need a receptacle in my kitchen peninsula?

I am remodeling my kitchen, which includes a peninsula. The area of the peninsula as measured from the wall is 18.7 sqft, so I need 2 receptacles. One of them must be within 2' of the end of the peninsula, so I planned on placing it at the very end. There are no backsplashes/short walls on the three sides of the peninsula. Can I locate the second receptacle on the wall/backsplash, underneath the wall cabinets?

If the answer to this is "yes" because of 210.52(C)(3), my next question is whether I need a receptacle somewhere in the middle of the peninsula. The peninsula is 6' long. This means that an appliance at the midpoint can reach neither the wall (it's 3' away) nor the outlet at the end of the peninsula (that is also 3' away). Does a peninsula without a wall still need to follow the rule about appliances not being more than 24" from a receptacle outlet?

Here is a quick snippet from my cabinet design. You can see it's 72" long and 32" wide. The wall is at the top of the image. The bookshelves are 8" and 11" deep on the left side of the image. The possible location for an outlet accessible from the midpoint is within the bookshelf that labeled 24"x8"?. Because a single gang box is probably 3"-4" deep, the outlet would only be 6" from the counter's overhang.

If there are any reminders on dishwasher wiring, I'll take that, too! It's already wired in this location, so hopefully however it's done, I don't need to touch it. 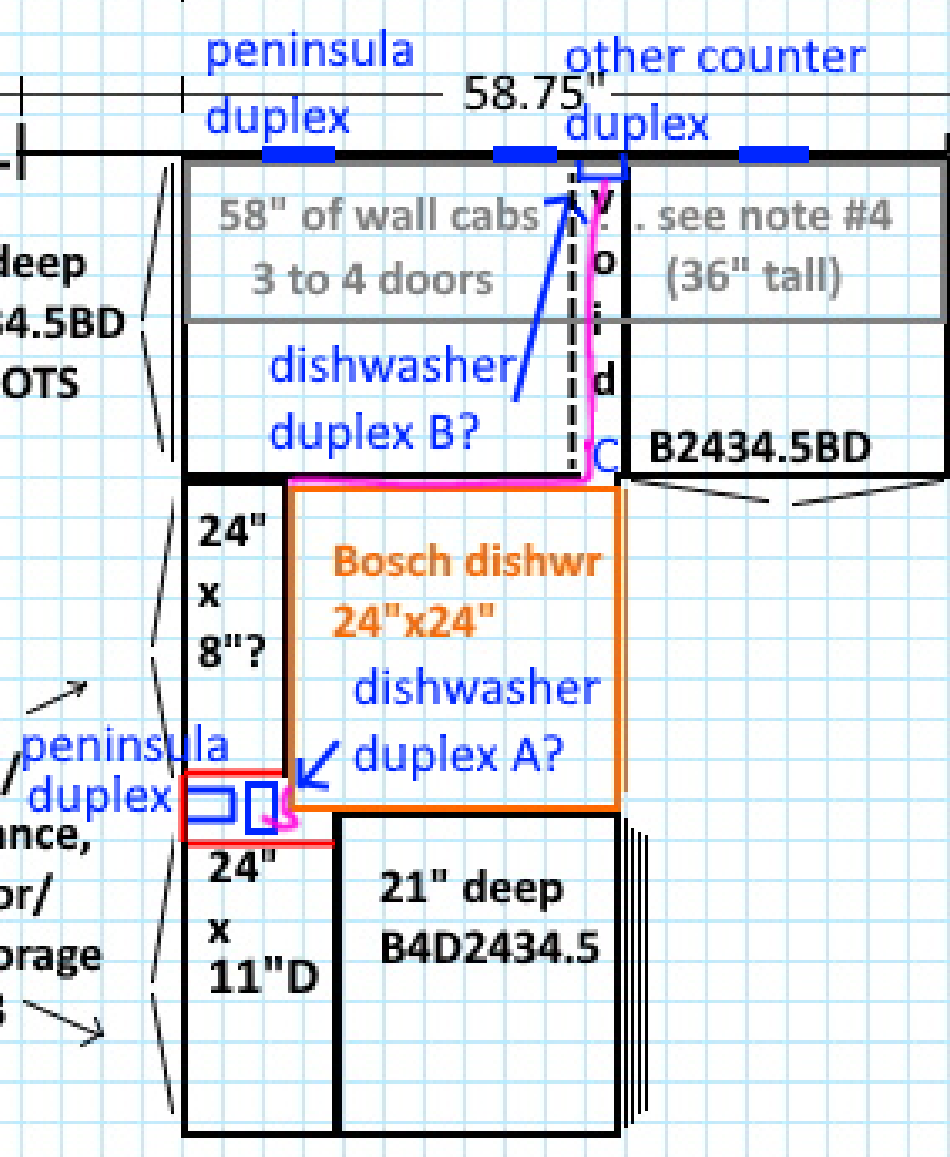 EDIT: I've edited my post with current thinking in blue, pink is the path of a grounded electrical cord from the dishwasher. I've reduced the size of the two bookshelves (with doors) on back side of peninsula, so that there is now an empty space between the two with a 3-4" filler piece at the front. I could cut into this front to attach a handy box for the peninsula outlet that must be 24" from the end of the peninsula. I have marked the top of the drawing with thick blue lines where duplex receptacles will exist, one counting for the peninsula and the other two as normal.

The next part I've labeled is for the dishwasher outlet options. It's currently hard-wired, but I've learned that could be a problem because the junction box needs to be accessible. Three options. Option C, where 'C' is labeled on drawing in blue: hard-wire it and locate the junction box here. This is behind a 30" deep drawer in an empty space. Option B, ignore. I just realized the appliance cord would be more than 3-4 feet which I don't think NEC code would allow? But that would have been a duplex 12" from the floor. Option A, not accessible unless I remove the dishwasher, a duplex outlet mounted in/on the floor, appliance cord plugged in there.

Dishwasher question: which placements A-C are valid and code compliant? Do I need a disconnect for Option B, if I can just reach back and unplug it? Can the 12/2 be typical NM cabling, or do I need something protected?

Bonus question: The circuits for the dishwasher and disposal (11+13 at my panel) are multiwire 15A circuits and the breakers do not have GFCI or AFCI protection. What is the best way to make this code compliant? An electrician told me I can't get new breakers because they don't make them for this situation.

electrical nec
Share
Improve this question
edited May 3 at 16:28
MinnesotaDIY
asked Apr 17 at 21:47

Line of thought 1 - code is minimum, more might be useful in practice.

Line of thought 2 - depending on the exact interpretation of the "2 feet", the "outlet for the middle" could also be "the outlet within 2 feet of the end" if placed correctly.

There are cute pop-up outlet products to go into the countertop, but they are costly and I have to wonder how well they handle a liquid spill.

Is that other than that one for the end, it's your call. My call is line of thought #1. The "2 foot rule" (252(C)(1) is "horizontally along the wall" and the "2 feet from the end" is because that rule wouldn't make use at the end of the peninsula feasible.

One for the first nine square feet of countertop/worktop. One for every additional 18 square feet. And one within two lineal feet of the end.

A peninsular countertop shall be measured from the connected perpendicular wall.

Not the answer you're looking for? Browse other questions tagged electrical nec or ask your own question.

4
How are electrical circuits routed in a kitchen island or peninsula without a knee wall?

3
Does a 16"W x 13" deep counter space need an electrical outlet?
3
Confusion regarding 2014 NEC
3
According to NEC 210.52 can this receptacle be counted as part of the required outlets in a dwelling?
1
What's the Actual Code for Receptacles Below Counters in Peninsulas
0
I need to run electric past the dishwasher to the end of the peninsula cabinet
1
What does "No Other Outlets" mean for a kitchen 20A branch circuit?
21
Why does US Code not allow a 15A single receptacle on a 20A circuit?
4
How are electrical circuits routed in a kitchen island or peninsula without a knee wall?
5
Outlet for built-in Microwave has 120v/20A (USA) breaker... what amperage receptacle is required?
2
Do I need more than one receptacle on a 17 foot kitchen wall with two doors?