How to repair this hole in our bath?

We bought our house about 6 months ago, and there was already a reasonable hole in the enamel (?) of the bathtub. It looks like this: 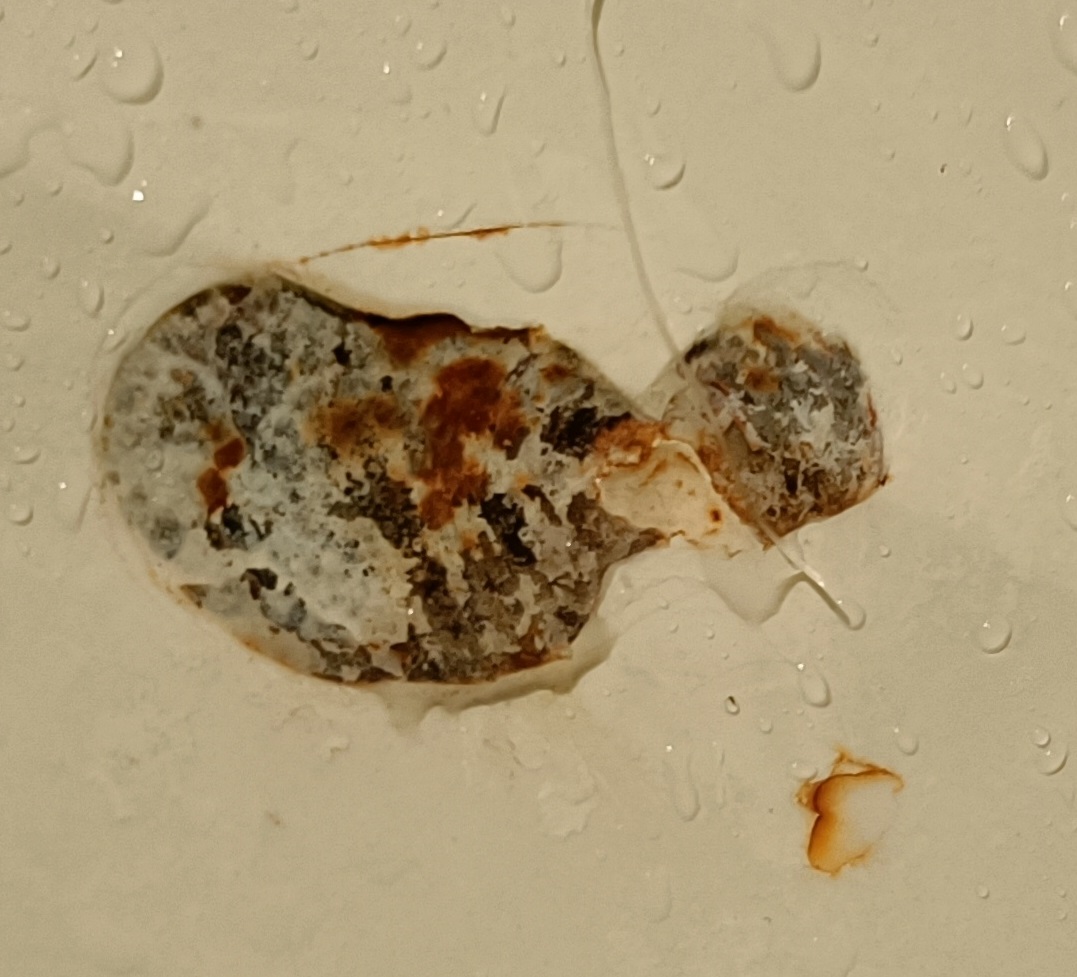 [Edge to edge, the whole thing is about 3cm]

I'm afraid I don't know what material the bath is made of, so I'm hoping this picture helps. My guess would be some kind of metal (since I can see what looks like rust in there), covered with enamel. If so, I've read that enamel repair kits are a thing, but I'm open to suggestions / advice for how to fix it.

Steel or cast iron with enamel coating. Steel is thinner and more flexible, also more prone to rusting out, cast iron is thicker, inflexible, and would take a lot longer to rust out.

Which is which is rather obvious if you know the two types, but hard to describe an accurate way to tell if you don't know in text, unless you can feel it move when you push on it (steel.) They sound different when you knock them. Steel is more "hollow and tinny" sounding, while cast iron is not.

Anyway, epoxy-type enamel repair kits are indeed a thing. As with any other "paint" job the preparation is key, as @crip659 has said in a comment. Anything loose, rusted, delaminated must be removed, and the surface prepared as the instructions of the kit require. Otherwise some little pocket of rust behind will tend to peel the patch off from below. I'd also suggest not only respecting, but perhaps as much as doubling the "time to cure after repair before use."

If the tub is steel, the flexibility of the steel works against the patch lasting well, but you can certainly patch it and see how long it lasts before hitting the "rip out & replace the tub" stage of repair. That's the ultimate solution (and if you are doing your own work, considerably cheaper than the "bathtub liner" option, which are horrid thin plastic at an absurd price, and apparently much of that price goes to paying for saturation advertising...)

2
How to clean rust from a bathtub?

5
What's the best approach to repair a wedge/corner crack in my foundation?
6
Why is my bath tub plug hole bubbling?
6
What is the best method of filling the gaps in wooden floors?
4
How do I repair my cracked shower pan?
0
Should I repaint this dryer part?
1
How to repair a giant hole in plaster over drywall (maybe ?)
1
How to caulking a bathtub with various size edge between wall and tub
1
Ran out of levelling compound when fitting underfloor heating, what are my options?
3
Identifying my trip-lever drain stopper to buy a replacement