How can I handle carpenter ants?

Last year, my wife and I purchased a house just south of Houston (Stafford, TX exactly). A couple of months into occupancy, we discovered that we had a problem with some Camponotus vicinus (Brown Carpenter Ant), and quickly got rid of them through the use of some boric acid and various other pesticides that were labeled for use against carpenter ants.

The thing about Camponotus vicinus is that they typically don't hit this far south and west, but I was able to confirm that's what they were by various sources around the internet.

Before you question on whether it's ants or termites, I can guarantee you that it's ants due to the piles of frass that they were leaving in a couple of places in the bathrooms, and I was able to grab a few and compare them to the ant/termite identification sheets found nearly everywhere.

But now we're starting to see swarmers of a different type of carpenter ant. These have the characteristics of Camponotus pennsylvanicus (Pennsylvania Carpenter Ant), but again, they don't really pose a threat to this part of the US. (See below)

I have removed the dead and rotting trees from my property, but I still need to trim some back. I also need to replace my soffits and facia boards on nearly the entire house to rid of that rotten wood, and I need to caulk around various pipes and such around the house.

I'm not terribly concerned about structural damage, but there's a lot of accessory damage that these things have and could do, and I want to make sure that's put to a stop.

My question(s) ultimately are as follows, though:

I just got home from work a bit ago and caught a swarm in the master bathroom. Among this swarm were 3 or 4 queens and several other swarmers. The queens were about 5/8" in length, where the swarmers were all 3/8" or shorter.

I've ruled out Camponotus pennsylvanicus based on the appearance of the queens. Their head and thorax are brown, and their abdomen is a banded brownish black. They only have one pair of wings and these protrude from their thorax. They are single-noded, which leans more towards Camponotus vicinus again.

Once I get the pictures off my camera, I'll post them here for further identification. 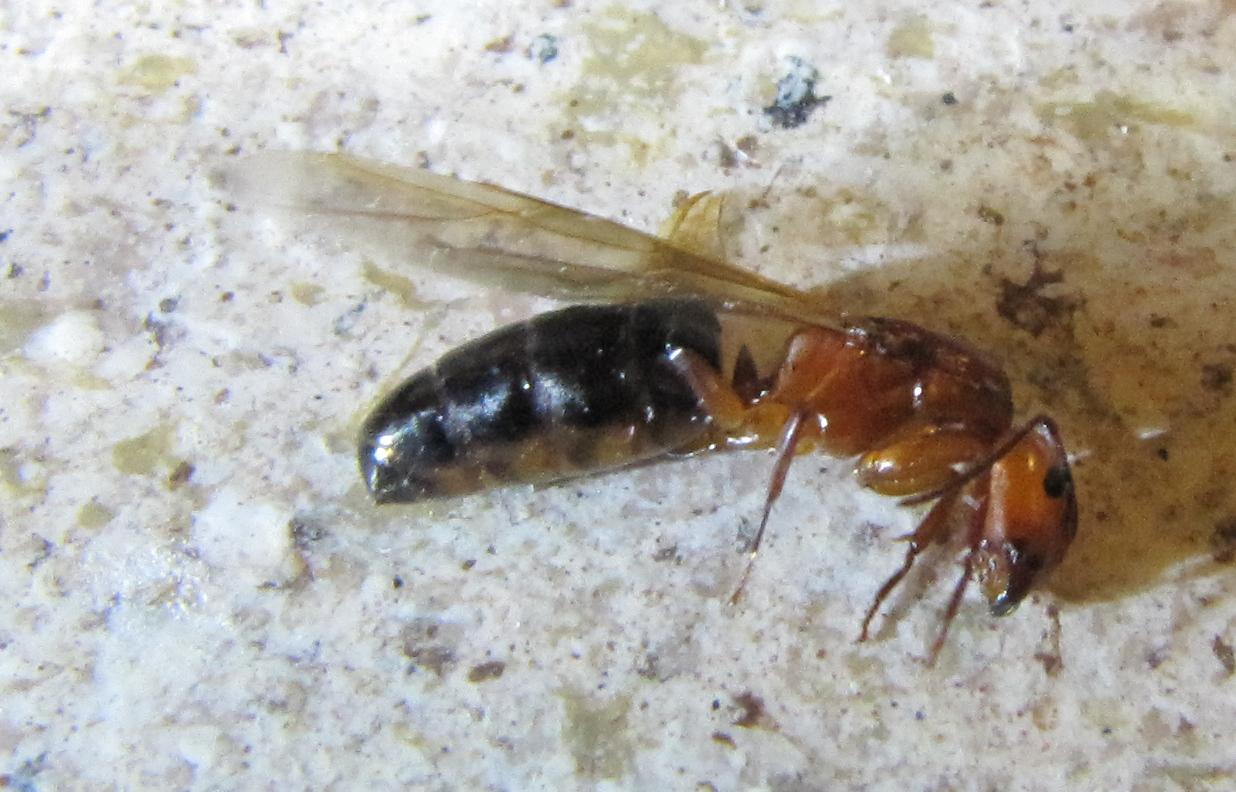 I was able to get of one of the queens.

Ants, and particularly carpenter ants, in wooded areas with plentiful food will be ubiquitous. If your property is sufficiently wooded it's likely that there are multiple colonies.

Carpenter ants are crafty, too. They are also hardier against poisons and pickier with baiting than other ants. When we had a problem with them I asked a few entomologists I know about their control. Their recommendation was that you must use multiple poison bait types. Carpenter ants will take protein (granules) or sugar (gel) baits based on their mood and the needs of the colony. You should supply both, regularly, around areas they frequent and around your home.

These products worked very well for me after vigilant application for a few weeks.

Carpenter Ants, as well as other ants, can be an going problem using the wrong treatment strategies. Most can be eliminated with Terro Ant Killer for $5.00 from your local hardware store but it takes persistence. Fire Ants can not be treated with Terro because they are not sweet eaters most of the time. Fortunately, Termidor SC came along to rid us of several tough treatments for pest problems including termites.

Try to eliminate any trees or foliage from touching the structure. You are trying to eliminate travel routes from the colonies main nest to the structure. This will force the ants to travel to the ground or power/electrical lines. They get most of their food from trees and bushes in the area. They are not eating the structure. They are just excavating tunnels for living space in the structure. Carpenter Ant do very little damage to most structures compared to termites. The ants will move into termite damaged areas within a structure and use as a home also. Carpenter Ants also seek out water damaged wood because it is softer and easy to excavate.

After you have eliminated the majority of travel routes, Carpenter ants can be eliminated rather easily by having a licensed pest professional applying Termidor SC as directed by label instructions. After application, most colonies are eliminated in about 7-10 days. Acrobat Ants, could take as long as five weeks to be eliminated due to the large size of some colonies. Estimated cost of treatment would be $150-$275. Treatment should last for 4-6 months. 23 years in DFW area pest control.

Not the answer you're looking for? Browse other questions tagged pest-control ants or ask your own question.

4
How can I safely get rid of fire ant mounds in my backyard?
3
Is there anything that common house ants won't burrow through?
2
How to protect wood against carpenter ants?
2
Removing carpenter ant colony
3
Carpenter Ants - Bait vs Spray
0
Are these holes in my garage's wall indicative of flushing out carpenter ants?
1
Getting rid of ants in exterior wall