How do I fix this 2-way switch wiring?

I have two bulbs (D and E), one at the top and one at the bottom of some stairs. Controlling these bulbs are two sets of light switches (A, B, C).

The switch at the top of the stairs (A) is a 'single' switch, and the one at the bottom of the stairs is a double switch plate (B and C), with the right hand switch controlling a third bulb near the front door (not shown) (does not affect bulbs D or E)

The issue is that the switches A and B do not properly (as I would like) control the bulbs D and E. Bulbs D and E only come on when A is off (up) and B is on (down)

Can anyone suggest what might be happening, and how to correct it?

PS: I have currently no idea where these wires run. If someone can suggest how I can 'bell them out' safely then I can make the diagram better. 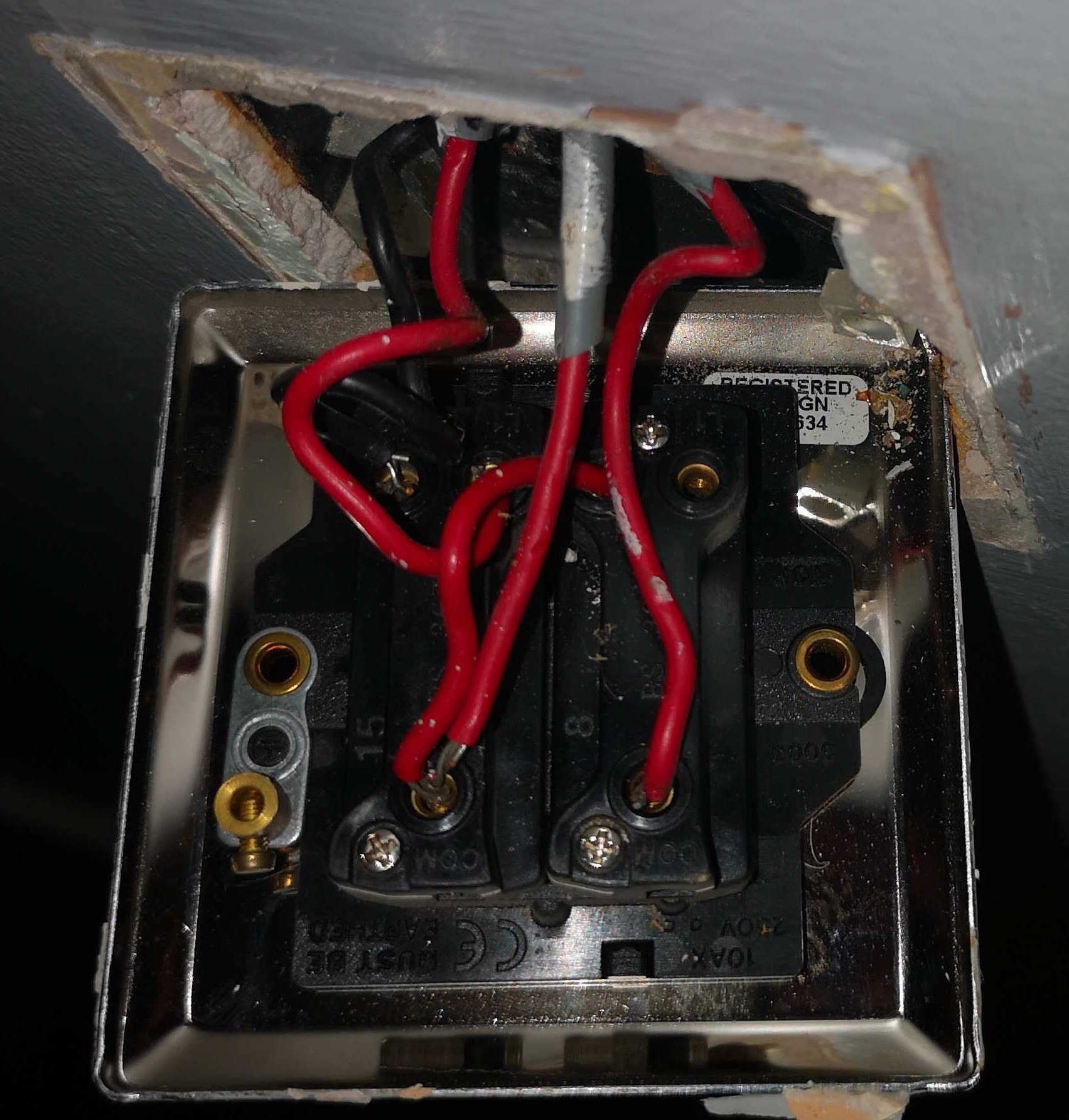 This looks like the older UK style of 2-way wiring, where the switched terminals of each switch are connected together and then the common terminals are run separately to a junction box. The switched wires were usually in one twin-and-earth cable running only between the 2 switches, and the common wires as single core cables (you can see the single core red in your photo of the bottom switch) It looks like in the upstairs switch someone has swapped the common wire for one of the switched lives, probably when replacing the switch plate.

So, What I think you have going on from your symptoms, if we make the "reasonable but not guaranteed" assumption that this was once a correctly working circuit.

Live in at B common, if B is off Live goes to Red Traveler, but Red Traveler can't connect to Red Lights, only to Black Traveler back to B.

If B is on, Live goes to Black traveler, A can switch that to Red Traveler back to B, or to Red Lights. Lights have a Neutral connection somewhere, not shown here becasue not shown on your diagram.

If you swap A Black & Right Red:

Someone previously exchanged one or both of those switches, e.g. for aesthetic reasons. They didn't know anything about 2-way circuits, did not note how the previous wiring had been connected, and just slapped 3 wires on 3 terminals.

To correct this, you need to learn a little more about 2-way circuits. Here's how they work.

(we call them 3-way in the States and use white for neutral and black for always-hot).

The important concept is the travelers. One is hot, and one is not. (sorry, that's 'live' to you). A 2-way has 3 terminals: one common and two travelers. The UK doesn't use special screw colors, so you'll need to look at the markings on the switch to see which is "common" and which are "travelers".

The traveler wires are easy to spot in your case: both of them are in the same cable. They are usually the same colors on both ends.

If you want to use tape, paint or shrink tube to identify wires by their function, feel free to do so (consistent with local laws). There is no need to distinguish travelers from each other.

While you're looking at the switches, make sure they have the BSI Kitemark or other reputable testing lab insignia. Many homeowners are installing cheap garbage they get off eBay, Banggood, Amazon Marketplace, or other dodgy mail-order sources. This stuff has no safety testing; the CE mark is faked without consequence (since the manufacturer is beyond reach of EU authorities).

This is a partial answer until we can get more info…

Can we have photos? I need to see how these wires are bundled into cables to have a better guess at where each is from/to.

UK lighting does not run on a ring usually. It's a loose collection of spurs. The 'power' is always in the ceiling, switches are powered by drops from one of the lamps in each circuit*. D & E are connected in the ceiling & you shouldn't need to trace that to get this to work. A & B are then connected from this drop & to each other. Basically, between A & B we should have L1 -> L1, L2 -> L2 & Com->Com. Simple. These are all switched lives, there is no neutral in the circuit. Colours are differentiated differently compared to regular plug & socket wiring.

Someone has jumpered the C's L1 to B's Common. That's not a good start. I'm not really sure what they were thinking.

If we look at B to start with, ignoring C, we should have 3 wires from the ceiling [hopefully black, red, green].
We should then have four new wires going off to switch A. A should not be connected to anything except B. B is the 'master', A the 'slave'. 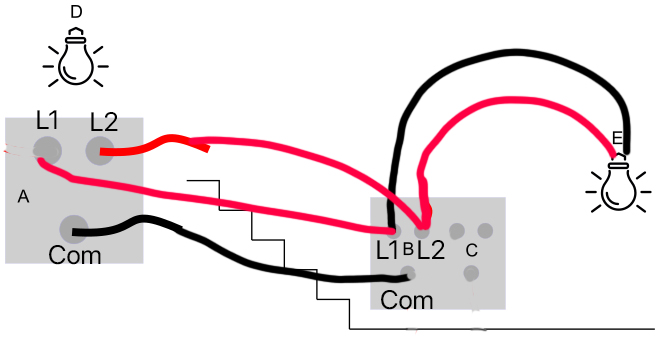 This is your basic UK 2-way wiring [ignoring Earth for now]. The two lamps are connected to each other in the ceiling, and that's where you 'real' live is too. If we look at only A/B, then the black goes com->com, fortunately, the reds can go to either of L1/L2 so you don't need to trace those.

Your B/C switch, though, implies there is only one red coming from A. The 'far end' of a 2-way [A] must have three wires plus earth, unless someone has tried to rewire it to a permanent live for a Smart switch, in which case it will start to look more like the American system shown in the other two answers.

I'd be tempted to start doing some continuity testing, so you can actually find which of those is which. There are two ways of getting it right & many ways of getting it wrong. You got the lucky one, the one that doesn't go bang.

*This is changing in new builds. Smart switches won't work with the old UK structure, so the system is moving towards the American system with a true live to the switch. I thought we shouldn't confuse the issue on old wiring.

Not the answer you're looking for? Browse other questions tagged electrical wiring lighting multiway-switch or ask your own question.