As detailed in a previous post, I was planning to use the dryer circuit in my condo as a MWBC. A 120V/20A outlet between one of the two hot conductors and neutral would power my small washer and dryer and a 240V/20A outlet between the two hot conductors would allow me to power some European appliance without the need for an external transformer of questionable reliability.

This plan was based on the implicit assumption that all US residential electrical systems are split-phase, i.e., the two hots are out of phase by 180 degrees. As a reminder that failure is more often due to false certainties than to those critical issues that were identified and properly addressed, the measurements I did today showed 208V between the two hots. This indicates that the utility does not a feed me a split-phase signal but two of the three independent phases of the transformer.

A little reading seems to indicate that this is not too rare, even if uncommon. Since no much fuss gets made about it, I am led to think that all those US home appliances that need 240V (dryer, range) are designed to keep working with 208V.

However, I'm not sure the same can be said for 240V foreign home appliances. In general in Europe the specified working interval is 220V-240V. 208V is well below that. Considering a 1500W appliance, a decrease in supply voltage from 240V to 208V corresponds to an increase in current drawn of 1A, from 6.2A to 7.2A, which appears to be rather benign, well below the 20A nominal limit enforced by the breaker.

Is there any negative consequences from having 208V instead of 240V between the two hots?

Thanks for all the answers. I did not focus on the frequency mismatch because the appliance label indicates a working range from 50 to 60 Hz, which is confirmed by my current use of it via a 110V outlet and a 3000AV step-up transformer with no detectable performance hiccup. 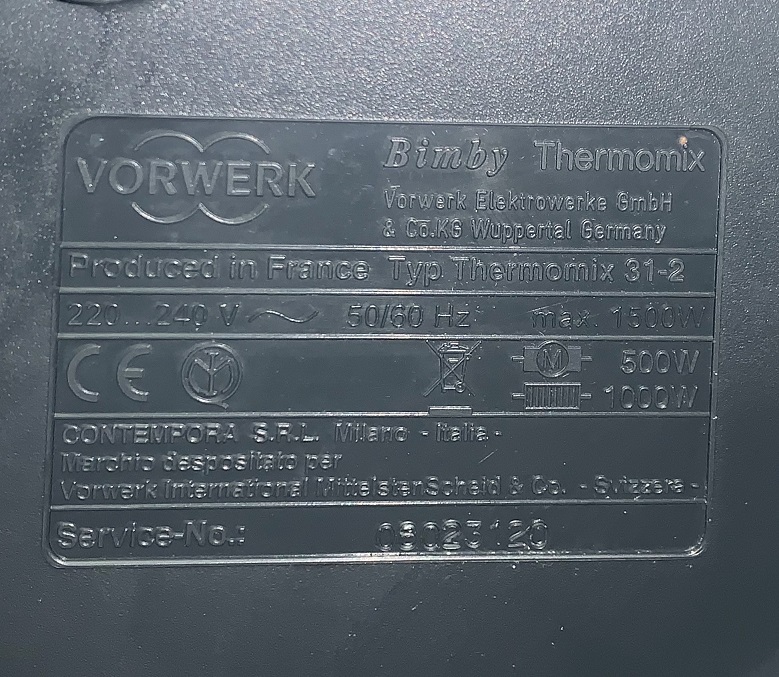 The label also indicates a working voltage range from 220V to 240, but I believe Simon B might be correct in thinking of this as a nominal range and adding another 10% of tolerance with respect to its center point. I guess the worst can happen would be a slower heating element and a slower motor.

In most cases (particularly all "dumb resistive heating" cases) the reduced voltage will lead to reduced current and power, not increased current to magically maintain the same power.

If your devices have a motor, they are already in trouble due to 60 hz rather than 50 hz power.

It's really marginal for European appliances. The standard across Europe has been set at 230V, with a tolerance of ±10%. That wide tolerance is to allow for existing supplies that are really 220V or 240V. Doing the sums, 230V - 10% is 207V.

Do make sure the appliance concerned will run on 60Hz. It's 50Hz all across Europe.

As detailed in a previous post, I was planning to use the dryer circuit in my condo as a MWBC. A 120V/20A outlet between one of the two hot conductors and neutral would power my small washer and dryer and a 240V/20A outlet between the two hot conductors would allow me to power some European appliance without the need for an external transformer of questionable reliability.

I recommend you read this great answer from ThreePhaseEel on the requirements for an MWBC serving both line-to-neutral and line-to-line loads. The TL;DR is you may be limited by the availability of two-pole common-trip breakers with both GFCI and AFCI protection.

Regrding the EU appliance compatibility with 208V 60Hz, check the label. Many modern appliances have universal power supplies which will work from 100V-250V on 50Hz or 60Hz. If yours is not one of those, obey the label.

It will probably work but it's marginal.

The numbers on the rating plate are the range of nominal voltages the appliance is designed to work with. There will be a tolerance band beyond that to allow for supply variation and volt drop. This tolerance band is probably of the order of 10%-15% so a supply with an actual voltage of 208V is likely within tolerance.

The problem comes when due to supply variation and/or voltage drop in your installation your nominally 208V supply is not actually 208V. Then you can easilly get outside the range your equipment was designed for. Under voltage is unlikely to be immidiately dangerous but it may well cause equipment to malfunction.

Regarding your specific appliance which seems to be a food processor with heating functionality.

Also be aware that the power output of resitive heating elements will vary significantly with supply voltage. I suspect the quoted 1000W is at 240V, at 208V that will be down to more like 750W. Not a disaster but things may well take longer to heat up then you are used to.

I would watch out for stalling of the motor. Assuming it's a mains powered motor, the motor will have less power on the lower voltage and the higher frequncy may mean it tries to spin faster (depending on what type of motor it is), this could lead to a stall which could lead to the motor overheating.

Not the answer you're looking for? Browse other questions tagged 120-240v mwbc or ask your own question.

5
Why would a 120v circuit work without a neutral?
5
Change from 240V to 120V
0
Best way to get both 120V and 220V from existing multiwire branch circuit (MWBC)
7
Electrical service sizing mix up in Mexico
10
Do travel voltage transformers really not have grounding?
8
Splitting 240V into two 120V Circuits
2
"Lending" the ground wire of a 120V/15A circuit to a 240V/30A circuit
0
How can I safely utilize a dryer outlet to power 100V and 220V loads?
0
Changing Tandem Breakers with Potential Unmarked MWBC