How do I fix an outlet where the junction box falls into the hole and the wires are too short?

First, this outlet is in what was once a balcony. The drywall was placed over stucco so there's about a 1/2 - 3/4 inch of stucco followed by a gap (1/2inch ish) followed by 1/2 drywall. The original outlet was an outdoor outlet in the stucco so with the extra inches the junction box barely reaches the outside drywall.

The hole was cut bigger than it needed to be and then the faceplate was used to keep it flush then it was given a coat of silicone around the face plate (probably so it couldn't pull out. (All this was done before my bf bought the place and no one noticed it before or just ignored it)

I plan on plugging a PC into the outlet (only outlet available) and really don't like the fact that i can literally pull it out the wall. (But at an angle because the armored cable going into the box is just slightly too short to make it without pulling hard) How on earth do I fix this (preferably without having to completely rewire as it's out of budget)

There is a stud nearby, so my idea was open the drywall a bit more attach current box to stud as forward as it can comfortably go then add an extension to be flush with the drywall and then fix the giant hole i just made.

Unless there are other ideas that require less mess, or ones that are better up to code. (I have other ideas but I'm 100% certain they wouldn't pass code)

Edit to add : there is only a 5 x7 inch hole in the stucco partially (read: mostly covering the front) covering the stud. I unfortunately do not have the means or expertise holding a saw to cut through * (I have a hammer and hand chisel though) it so although i can make the drywall hole bigger i (at the moment) gotta work with the stucco hole. I have moved the outlet over a bit and managed to get a bracket to hold the outlet forward. So it stops falling back looking into getting replacment "old work" side supports and may (most likely) add some wood behind the drywall to add even more support) at the moment,

Second edit update: finished. Screwed the box to the stud and then used a metal extension to make it flush with the drywall. Have to say I think I did a pretty good job. Outlet is solid now. Still need to cover new drywall seams but very proud of myself first time I've ever cut into and replaced drywall or even fixed an outlet so it didn't wobble or pull-out.
Wanted to say thanks to all the answers (all very good answers) and hopefully this helps others who may have a similar problem. I know feel confident enough to do some other things around the house ive wanted to do now. So again big thank you to all the wonderful answers. Oh and I used the lipstick trick to find where I should cut the new hole for the outlet, worked well enough cut a little to high on one part but still worked out, it's a nifty little trick.

It appears the hole is to big to use a re-work box. I don't know your skills or resources however I would suggest removing some drywall and moving it to a stud. While you have it open you might consider installing a double duplex (two duplex receptacles in a double wide box) to get some more outlets and if possible add another box a stud or two away.

Since you're apparently about to do some drywall repair anyway...

then add an extension to be flush with the drywall

I think you mean the first, so it sounds like you're right on track.

I'd second Gil's suggestion of installing a 4" square box so you can install 2 yokes for 4 outlets here. You'll never regret having "too many" outlets.

With a saw cut a tidy hole for a 2-gang box but 3/4 inches too wide right against the stud, and through BOTH layers of wall. The extra 3/4 inch is for a "stud extension" that will eliminate the double-wall problem.

Attach a piece of 3/4" plywood to the stud but jutting out in front of the stud, all the way to the back of the drywall. This provides a mounting base for the box that is at the right depth for the drywall.

Attach a 2-gang box to the plywood so it is flush with the drywall and requires no extensions.

You can move the outlet a little higher or lower so the cable will reach.

There is a stud nearby, so my idea was open the drywall a bit more attach current box to stud as forward as it can comfortably go then add an extension to be flush with the drywall and then fix the giant hole i just made.

Yes, do this but I would like to recommend an adjustable (telescoping) box. 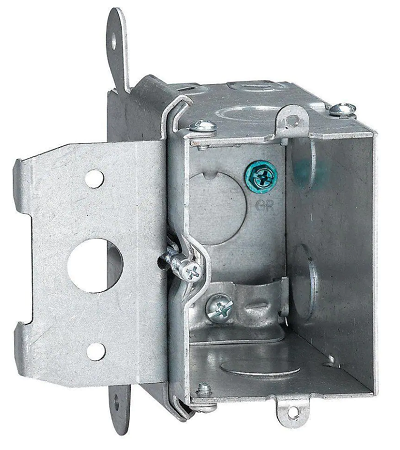 Unless there are other ideas that require less mess, or ones that are better up to code.

You've been bit by and are experiencing the "less mess" solution first-hand. Home ownership is filled with fun like this!

Around here we call your situation the "homeowner special".

Not the answer you're looking for? Browse other questions tagged electrical receptacle junction-box or ask your own question.

2
Adding additional outlet - max wires and box size?
1
Is it safe to wire a light junction box to a plug (which could then be plugged into a switch-controlled outlet)?
0
Replace and old outlet with GFCI where the GFCI won't fit in the existing box
0
How to extend short wires into new panel?
4
How do I join an existing outlet into PVC electrical boxes and conduit?
0
Upgrading to GFCI, and the outlet box isn’t screwed into anything
1
Through wall to surface mount box?
0
Remove a nail-in box with 3 romex cables and not cut drywall?
0
Wire too short for buried conduit, can I use a junction box to splice additional wire?
1
I am converting an existing fuse panel to a junction box. How do I connect to the new service panel?