I have a single gang outlet that current has a double/split switch installed controlling an inside light and an outside light. Ideally I'd like to have the outside light on a timer.

Does a single gang double switch exist that will let me control the inside light and provide and on/off schedule/timer for the outside light?

I cannot replace the single gang with a double gang.

If you are looking for a schedule timer; not a countdown timer, it's not likely you'll find it with a separate switch on the same yoke. Even though electronics continue to get smaller and smaller, I don't think you'll find a combination 24 hour timer... Yet. It may be better to simply expand the single gang outlet into a double gang outlet.

If there is enough space on the wall for a double gang outlet, the biggest problem you'll likely face is removing the old box. If the switches were installed when the house was being built, it's very likely the junction box is nailed/screwed to a stud. In this case, you'll probably be looking at some drywall patching. I've found that it's often easier to make a bigger hole than you need, since you'll probably be taping and mudding either way. Drywall is cheap.

Once you've removed the old box, you can either use a traditional box that attaches to a stud (new work), or an "old work" box that anchors to the drywall by way of a couple extendable tabs. 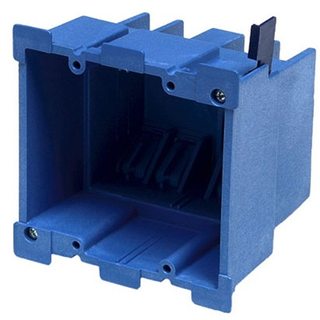 With more space available, you can control the inside light with a standard snap switch, and the outside light with a 24 hour LCD programmable switch. The only problem you might run into using a switch like this, is that the switch will likely require a grounded (neutral) conductor. Which may, or may not be present in the box. 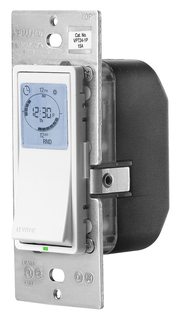 NOTE 1: 24 hour timer switches are available from many manufacturers, the aforementioned product is for example purposes only. I in no way endorse or recommend this or any other product mentioned.
NOTE 2: If you intend to control an inductive load, make sure the switch you choose is rated for such loads.*

This switch combines a timer and a dimmer, each controlling a separate load, in a single gang box. 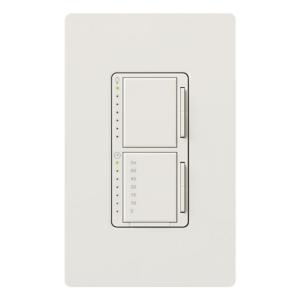 1
How can I install a Leviton timer switch in this box?
1
Light switch timer for outside lights
0
How do I replace one switch in a 2-gang box with a timer?
1
Wiring timer switch into 2-gang switch setup with common load (red) with downstream load
1
Wiring Diagram for Double Gang Box - Double Toggle Switch + GFCI Receptacle
1
Installing a smart switch timer - 8 wires in gang box?
3
How to replace a double switch (single-pole and three-way) with separate switches?
1
Wiring diagram for light switch, GFCI, timer and bathroom fan