What is this lightbulb and how do I change it?

The lightbulb pictured below is in a ceiling lamp fixture in the United States and is probably original to the house, meaning approximately 1985 vintage.

There is no lettering or labeling I can see on the bulb, just the faint bossing on the lamp itself ("Nadair"?) to identify it.

The glass is fairly small, no more than a few inches long, much less than an inch wide. There is no obvious direction to tug or twist it that releases it, although I've been reluctant to pull hard for fear of breaking it in my hand. (On that note, this fixture is old and it took quite a bit of brute force to pry the one extendable claw out to release the cover.)

The white plastic pieces seem to be part of the fixture itself.

What is this thing, and what is the trick to removing it?

It has now been removed, and is the subject of the third image and the new question, "Did I break this thing?" But I can get it to a hardware store, now, which is more than half the battle. 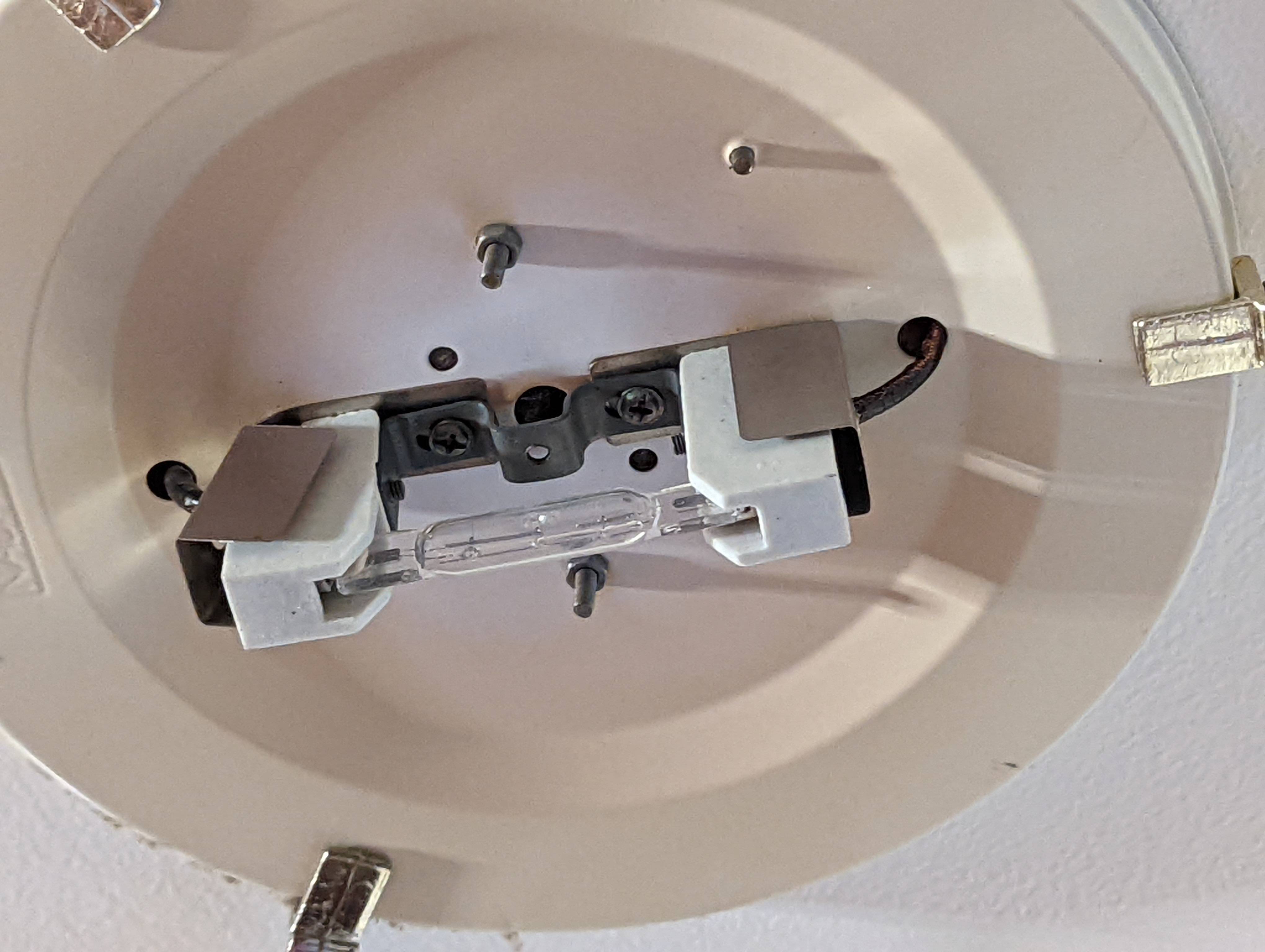 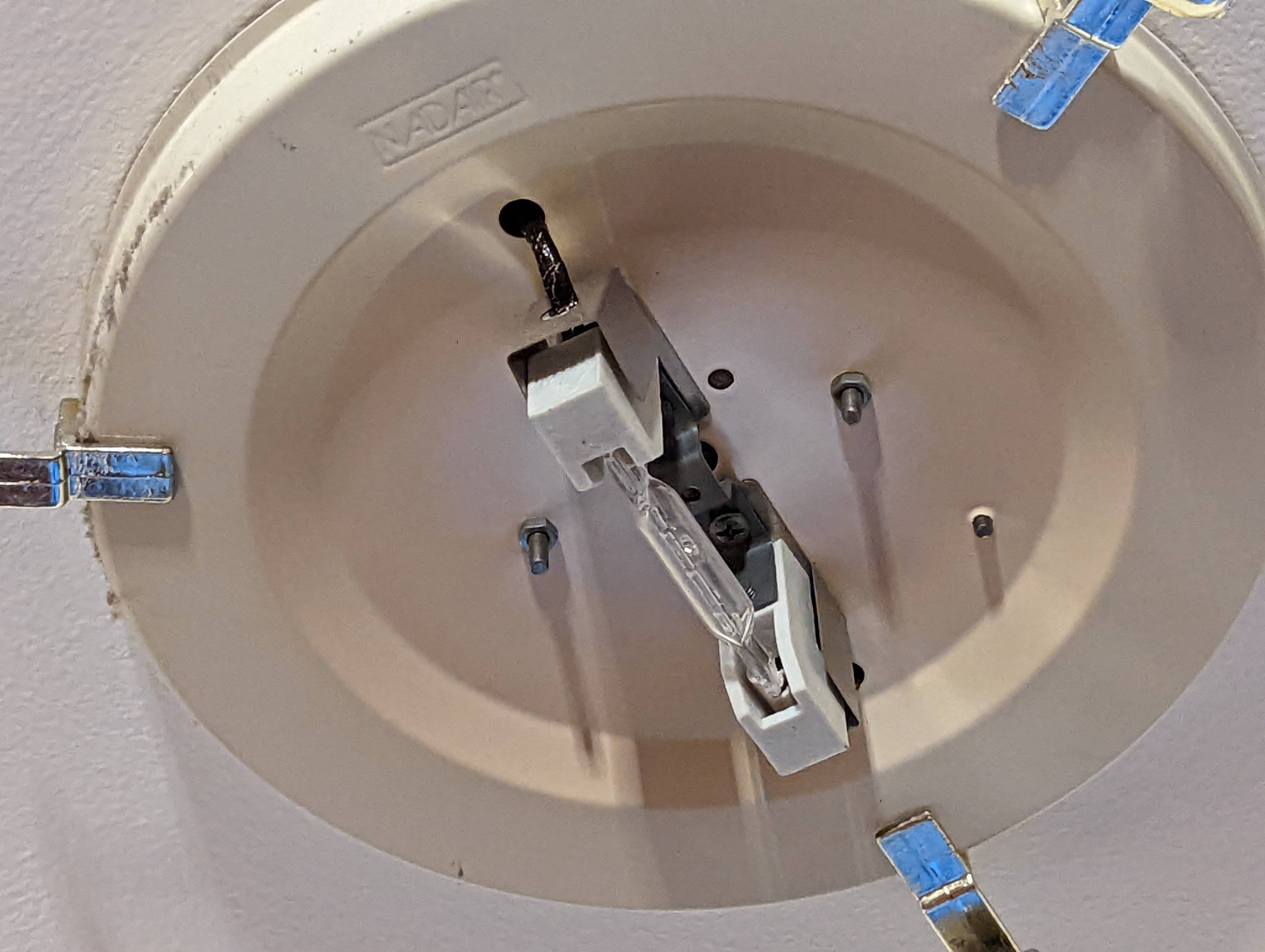 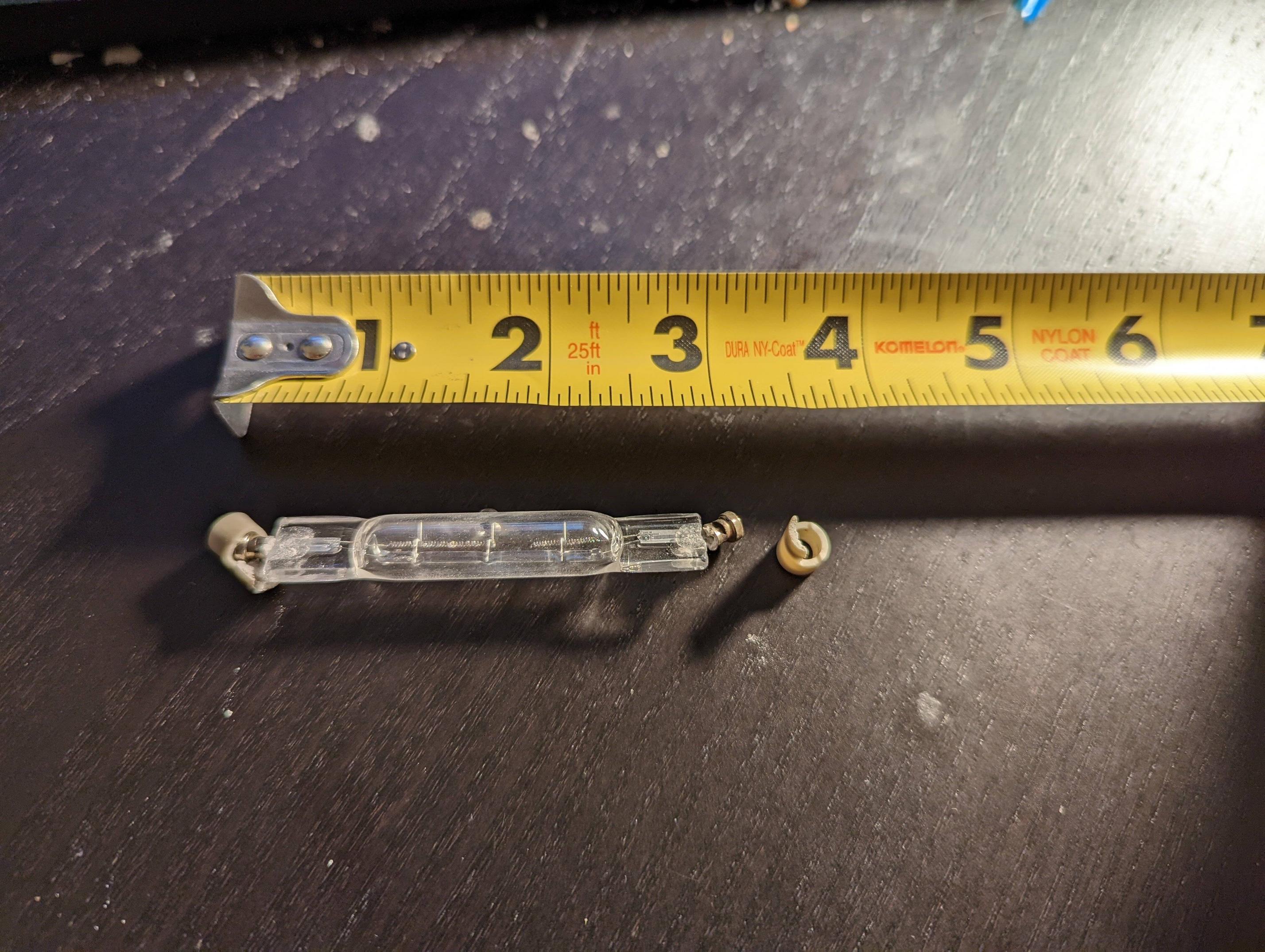 It's a double-ended halogen lamp. Looks a lot like a T3 size but I'm having trouble locating a picture of one so short in length as yours appears.

The ceramic blocks at the ends of the lamp conceal a spring loaded terminal. Push the lamp sideways (along its axis) toward one of the blocks, then lift the opposite end of the lamp out of the holder.

Sometimes the fixture terminal and the lamp terminal can stick together. You could try twisting the lamp just a little or inserting some tool into the end block to help separate them.

One might argue this is all a bit academic.. replace the entire fixture with a quality fluorescent or LED model!

Just to add a bit of terminology info from the web to Greg's excellent answer:

T type halogen bulbs feature the letter “T” to indicate their tubular shape, followed by a number which specifies the tube's diameter.in eighths of an inch. For instance, a T3 bulb is a tubular halogen bulb which has a diameter measuring 3/8ths of an inch.

An R7S is a double ended, recessed single contact (RSC) linear halogen lamp measuring either 118 mm or 78 mm. Some less common lengths are 189 mm, 254 mm and 331 mm. These lamps have a T3 shape on an RSC/R7S base. These can also be known as J type and T type lamps. (From an Amazon QA comment)

Your bulb looks like it's probably 78mm long. BTW, yes, the photo shows a broken bulb.

Also, it's VERY important to make sure the wattage of the bulb is lower than the safe limit for the fixture -- otherwise a fire can result, as these bulbs get VERY hot.

Handle the new bulb only with a clean tissue or equivalent, to avoid skin oils damaging the bulb.

I would not worry excessively about the ceramic ends breaking off of the old bulb, though do inspect the fixture prongs for corrosion and wipe them clean. The bulb obviously gets extremely hot during operation, but transfers a limited amount of heat to the socket.

Inspect the fixture prongs with the breaker off; no guarantee that mis-wiring doesn't have 120V on one end.

I second the "put in an LED fixture if you can" comments. You will save money and it will be safer, unless you need the heat for some reason.

Not the answer you're looking for? Browse other questions tagged ceiling lamp light-bulb or ask your own question.

3
How do I remove a double-ended T3 R7S bulb that isn't spring loaded?