Is there a way to remove this sliding door without taking down the trim?

I have a set of four pocket doors in a converging bypass configuration:

The hardware is around 15 years old. I don't know the brand of the hardware, but they look similar to Hettich TopLine Grant 7000-series (catalog pages 5.16-5.17). The track is identical to part # 7003, but the carrier and top plate connect to each other differently than parts 7000 and 7222, with the post sticking down from the carrier instead of up from the top plate. (I could find no other manufacturer that makes a double-track I-beam/T-beam track that has a carrier that looks like the ones we have, so I assume this is an old variant of the 7000 series that has since been discontinued.) These doors also have a floor track that looks just like the "Continuous Guide Channel" part 1222 that is available for the 700-series (catalog page 10.6).

The problem is that one of the doors has fallen off the track. An overenthusiastic "helper" decided to pull even harder and managed to get the carrier jammed with only a single wheel still on the track: 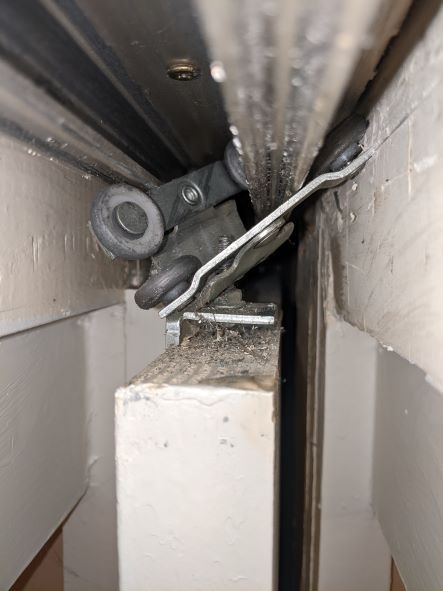 The trim is multiple layers of wood and extends several inches above and below the door frame, so I really don't want to have to pull it all off.

As far as I can tell, if I can disconnect the door from the carrier, the release of all that weight will allow me to unstick the carrier, evaluate it for damage, and either reinstall it or replace it.

Looking at one of the other doors on the track, I see that the top plate hangs from a bolt that is part of the carrier, and that a nut holds the bolt tight in the top plate: 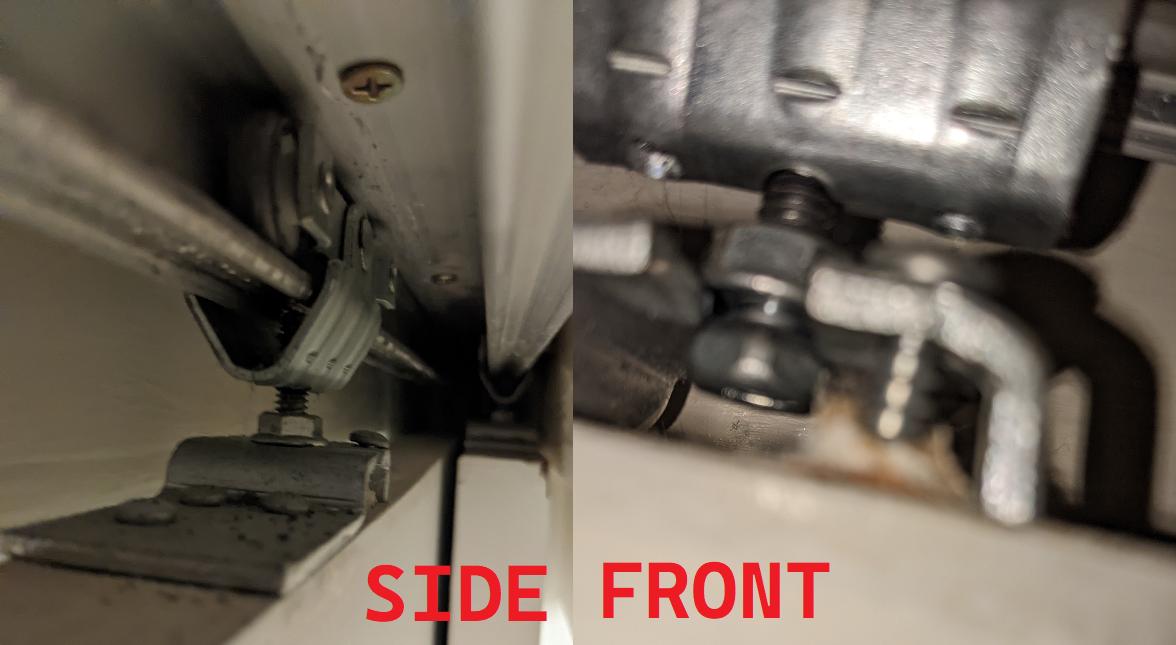 If I can loosen this nut, I should be able to lift the door slightly and push it sideways off of the carrier's bolt.

What kind of tool(s) do I need for this?

The hardware kit would've come with a thin, offset wrench for accessing that nut. By loosening it you allow it to slide out the slot. There are other ways to go about this, but I'd find or make a new wrench.

Your local hardware store may have aftermarket wrenches. The big river does. A grizzled neighbor probably has 7 of them in a coffee can. Otherwise, a little Dremel work on some 1/16" bar stock should do. It's probably 7/16", 1/2", or 12mm.

Failing that, pull the screws in the upper track channel and take the whole thing down. You'll need a wrench to reset it, though.

Not the answer you're looking for? Browse other questions tagged doors tools or ask your own question.

4
How do I fix a pocket door wheel track?
2
How can I remove this sliding door?
5
Is there a tool I can use to cut out the templates for door hardware?
2
Can this sliding door hardware support solid wood doors?
1
Indoor sliding doors getting harder to open/close
3
What is the exact name of this top pivot with plastic lip for old metal bifold doors? (see photos)
1
Is there hardware that lets a swinging cabinet door pull open a sliding shelf?