In 2017 my family moved to a new construction. Despite having three-phase power, I've noticed that all the electrical connections are on just one phase. The main breaker for this phase occasionally trips, especially if we run many appliances at once (oven, two room heaters, water kettle, and the home lighting which is almost all LCD bulbs).

I am installing a rooftop solar system without battery in the coming weeks, if that has any importance. This is in Israel, we use 230 V 50 hZ household electricity. I have read this similar question but the answers discuss what is possible, with an emphasis on the NA market, but do not discuss what it typical or even best practice for a greenfield three-phase installation.

This is the entire panel. Unrelated to this question, one of the circuits is down because after last week's rain it is tripping the RCD-GFCI. It feeds outlets in the exterior load-bearing wall in two adjacent rooms.

It appears that I was wrong. I thought that the three triple-breakers were main breakers for each phase. Thus, when only one is tripping (the one next to the RCD) and the whole house goes dark, I thought that the whole house was on a single phase. But that is not the case. Rather, that breaker is 25 amps and breaks all three phases. The 16 amp triple on the left goes to a room air conditioner, and I think that the 16 amp triple on the right is unused.

Close up of the main breaker and RCD from above:

Close up of the main breaker and RCD from below:

Close up of the two triples from above:

Close up of the two triples from below:

Is 25 amps really enough for the main breaker?

I do understand that it is 25 amps per phase, so that's 75 amps for the whole house. But a dozen 16 amp circuits shouldn't require a main breaker rated higher than 25 amps? I stress that this breaker pops often. I suspect that many of the heavy loads may be on a single phase, is that something that I can check? I think that using an ohmmeter with the main breaker tripped might work, but I'm not an electrician so I don't ever touch anything inside the panel without a professional.

This is in a stand-alone home on half a dunam of land (1/8 acre) built in 2017. These are the high-load devices in the house, I do not know which devices are on which phases:

25A per phase isn't very much

However, the main breaker size is decided by the wires feeding it, and the capacity of the power company's transformer. We put breakers in to protect those wires from starting a fire.

Particularly if you plan to do EV charging here, your electric service is far too small for the job. 22,000 VA is about 30A per phase, and that is not going to happen on a 25A service (though note: EVSE's are extremely modern and can be configured to a lower current rating, depending on what the service can handle).

You will need to acquaint yourself with which breakers are on which phase, which loads are on each breakers, and the current draw of each load. AKA the "Green Acres system". Make sure that no circuit exceeds its trip and no phase exceeds its 25A phase trip.

The main question will be determining which breakers are on which phase. You can do that with a quality voltmeter. Start at the main breaker at one phase. Measure to each other breaker's output terminal (it needs to be on). If you see 0 volts it is on the same phase. If you see ~400 volts it is on a different phase (no practical way to determine which).

If you prefer to do this with all breakers off and measuring continuity, that can work if you have access to the input side of each breaker. Measuring continuity with any beakers on won't work, because the stuff on the circuit will effectively short the outputs together (at low test currents).

Now, on this DIN Rail type breaker panel system, they don't have pre-defined "bus bars", and everything is just bodged together with many jumper wires (and sometimes some bus combs). That is normal for European style systems. The upside of this system is the phasing of each circuit is easy to change. So if you find yourself with an excessive number of practical loads on one phase, that can be tuned easily by an electrician.

Q1: In most Euro-system countries, the 230/400V is created at a transformer which serves several city blocks, and each house is given 1 phase and neutral. (though 2 phases or all 3 can be had).

Israel is a nation of relatively recent immigrants. It wouldn't surprise me at all if the person who wired your house came from a "1-phase" country and followed their training and habit, ignoring the other 2 phases.

Q2: Probably you can move loads to the 2nd or 3rd phase. Many larger electric appliances are certainly designed for that. In fact where 3 phases are available, this is preferred as it evenly loads the 3 phases. (Americans wonder why almost every size of tankless water heater takes three 240V circuits -- that's why.)

Q3: Can I do that with an EVSE? Maybe - but the breaker would need to have common trip. Most likely an EVSE is going to be drawing from the 3 phases and ignoring neutral - that is, it will be "Delta-connected". When a load is Delta-connected, it needs to have common trip so all 3 breakers throw if one trips. And unfortunately the "Type 2" IEC 62196 connector leaves it up to the car whether to be a wye or delta load. So you must plan for the worst and have one 3-phase common-trip breaker.

What a bad design - there was no earthly reason to bring four phase wires to an EV - if you have all 3 phases, neutral contributes nothing, and if you only have 2 phases, you only need 3 wires. EV chargers onboard the car are silicon electronic devices which dynamically limit their current draw, so they certainly can adjust "on the fly" to suit different currents and phasing arrangements.

To your last question

There is no need to repeat the good content of Harper. I just want to answer your last question.

You cannot balance the phases with an ohmmeter. The professionals do it by measuring the current with a clamp meter, on the live circuit.

Most of the time that won't even be necessary, as the average electrician has a fairly good idea on how the loads are distributed by just looking at the circuits..

I expect the distribution of the phases to be like this: 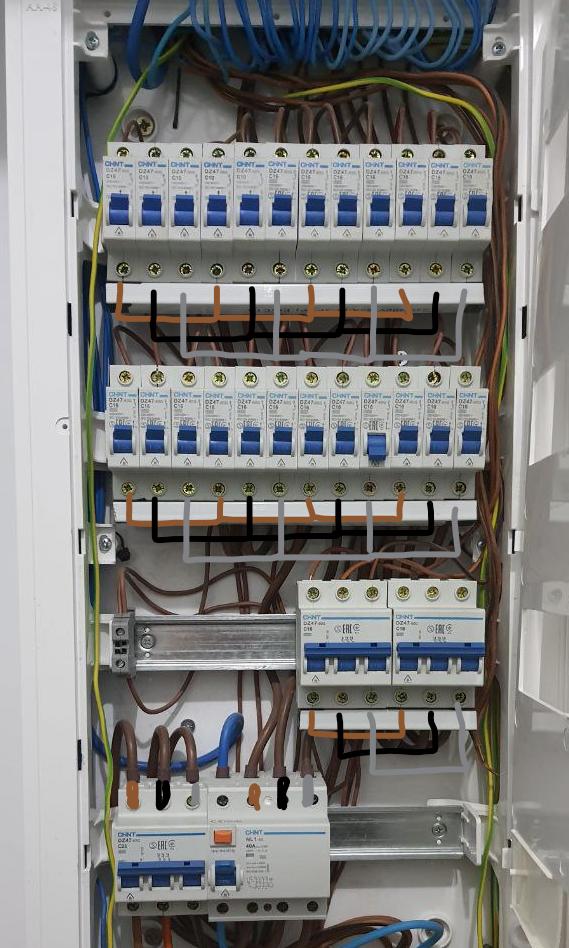 Update, response to your comments

You can of course verify the phase distribution with an multi-meter:

If you feel confident enough to work on the live panel, and have a suitable device (600V CAT III device or superior) you can also measure the tension across the breakers. Please note that 400V is to be taken seriously.

Since you can verify the phase distribution with the main breaker off, I'd recommend to take the safe way and test just the continuity without working on the live panel.

I don't know your local electrical code, but one RCD for the entire panel strikes me as the bare minimum. Maybe one RCD per row would be better, but requires extensive alterations (one neutral bar per RCD)

6
Can I using a 3-phase connection to power 1-phase AC unit?
1
Should I use 12/3 NM cable for a 240 volt 40 amp electric cooktop?
0
Question about electrical service for subpanel in pool house
0
Optimal Breaker Configuration for Split Phase Mains Power
1
Getting 120v single phase & 240v three phase out of 240v single phase receptical
2
Whole House Surge Protector connection
5
Swapping wires in electrical panel to move outlets to different phase of service. Is this safe?
1
Is a 240vac (2 pole) outlet a "single phase receptacle"?
0
Temporary "emergency" electrical power supply improvisation
0
Are whole-house GFCIs legal in the US?