I have read in a previous forum post
Is it OK to borrow a ground wire from a different circuit?
that NEC in article 250.130(C)(4) allows the grounding of an ungrounded circuit by connecting to

The article quoted does not specify any restriction in terms of the relative gauge of the conductors in the two circuits.

I was wondering whether or not is a good idea to "borrow" the 14 AWG conductor of a nearby 120V-15A circuit to provide ground to my 240V-30A washer/dryer circuit and substitute the existing 3-prong outlet with the grounded 4-prong one.
Is the extra resistance due to smaller gauge wire (14 vs. 10 AWG) negligible in a typical circuit of length sized for a 1000 sq ft apartment or is it enough to create a significant delay in triggering the 30A breaker if a ground fault occurs?
The fact that NEC glosses over any potential gauge mismatch would let me think that the first option is correct.

However, some additional research seems to suggest that concerns over using a smaller gauge ground wire are relevant. In this post
https://www.jlconline.com/how-to/electrical/dealing-with-thinner-gauge-ground-wire_o
the expert suggests that the potential problems arising from a smaller ground wire can be solved by using arc-fault circuit interrupter (AFCI) breakers, because such devices are triggered by a small 30mA current in the ground wire. In my case though, if I am correct, this would not help, because the small ground wire current would trigger the 15A breaker of the lending circuit and not the 30A breaker of the borrowing one, which has no ground wire. Any suggestions is highly appreciated. Thanks

Following crip659 recommendation, I finally mustered the energy to move washer and dryer out of the way and open up the 240 outlet, which of course is located in the most inconvenient spot to reach. It was a worth effort, because it led to some important discoveries.
The first one is that in its current configuration the outlet is very dangerous: it has a plastic box, but both its face plate and frame are metallic. And not "grounded" (i.e., for a 3-prong dryer circuit, not connected to neutral) as revealed by a continuity test. Additionally the isolation of the wires is not in the best of shapes 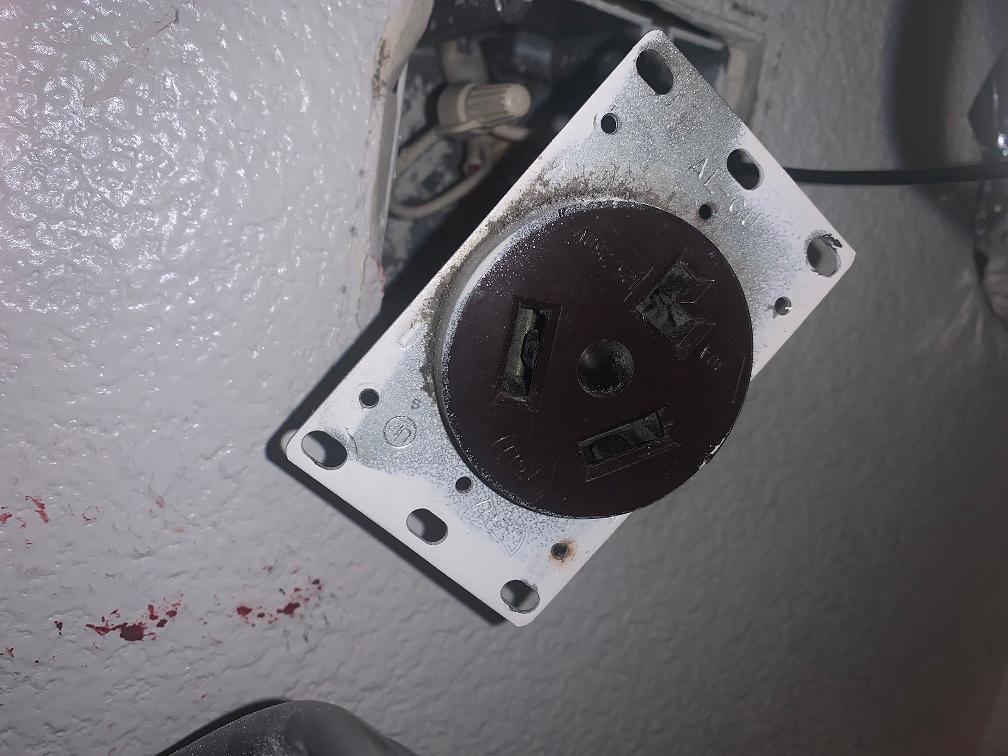 The second discovery is that, as crip659 hypothesized, the dryer outlet is indeed fed by a NM cable with a ground conductor. However it appears that some sadist took pleasure in cutting it short, in such a way to completely hide it inside the cable sheating. This happens both at the outlet end as well as at the breaker panel end. Why would anyone go so out of his way to make sure that no ground connection can be made is beyond my comprehension. 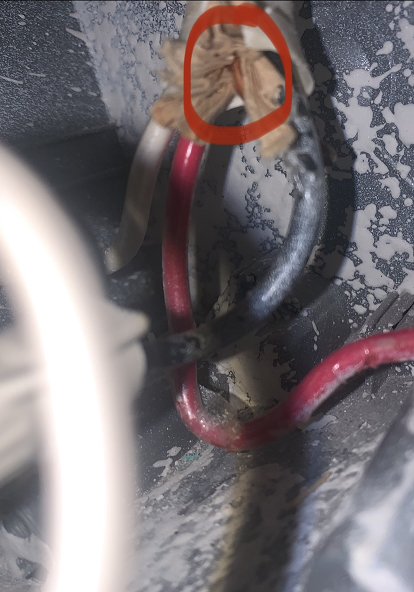 Tip of the ground conductor inside the outlet

The fix on the outlet side is an easy one. I would just cut off the damaged ends of neutral and hot wires and move the outlet by a few inches to account for the shortened conductors.

The fix on the other end, however, is something that worries me more, because my panel does not appear to have a turn-off switch. 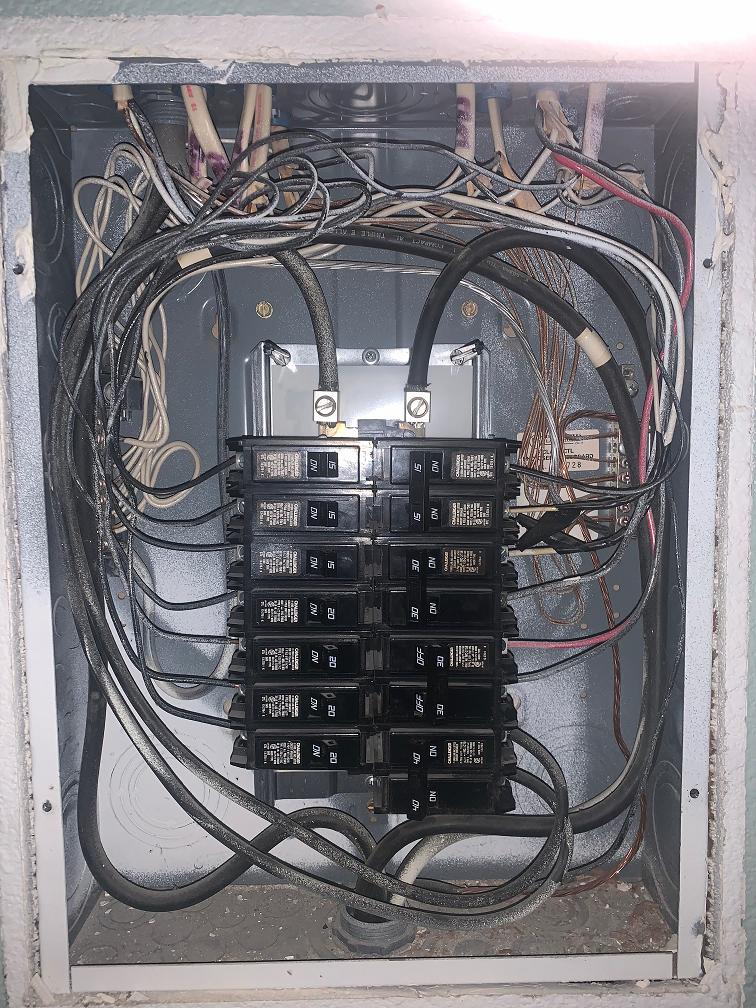 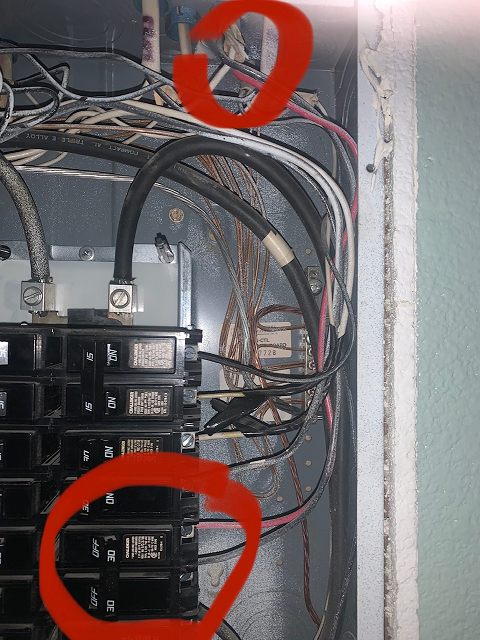 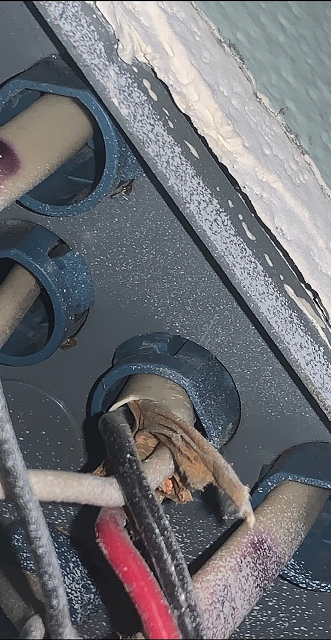 I would not want to touch the breakers or anything connected to a live wire, but I can of course switch all the breakers off and work only on the de-energized side.
Off the top of my head I can think of two potential easy fixes, none of which is particularly elegant. I would appreciate any comments/critiques/suggestions on their merit and code-compliance

I just thought of another possibility that is so simple to be either genius or totally idiotic. It goes without saying that, in a typical scenario involving these two alternatives, the probabilities are highly stacked on favor of the latter. Anyway, here it is: can I just terminate the mutilated wire ground of the dryer circuit by bonding it to the breaker box, right there at the point of entry? Since the box needs to be grounded, what more is there to gain by going all the way to the ground bar?

Thanks to everyone who took the time to provide comments and answers. You all contributed to help me get to a final outcome that is better than what I originally envisioned. At the end I went with the easiest solution, extending the grounding wire inside the breakers panel.
@pmont unfortunately the leftover wire was too short and did not leave any room for crimping. There was barely enough space to close the lever of a Wago connector, but I managed to get it seated all the way. I pulled pretty hard and the connection did not budge. Here is how it looks. 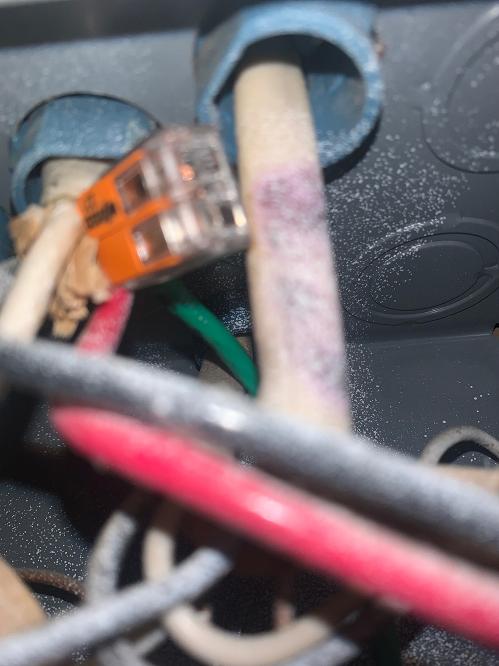 The connection at the panel entry

On your edited data:

Wow, yes, that is pretty incomprehensible. But keep in mind, in the 60s and 70s, those electricians felt toward grounding pretty much the same as electricians today think of torque screwdriver requirements: they think of it as know-nothing lawyers fooling around with stuff that's worked for 50 years. (which is wrong at every level, but that's what they think). Or it could be a DIYer who didn't have Internet back then.

Your plans for working around the broken ground wire seem solid. I've done the "box near the panel" myself on a rewire of a factory, where someone cut all the wire ends at the edge of the panel to steal the breakers. See if you can loosen a clamp and pull a little more wire in from the wall.

By the way, the "box near the panel" is a great trick when you need AFCI on a panel, but the breakers are obsolescent or you just want to pay $20 for an AFCI receptacle instead of $40 for a breaker.

It's obvious the dryer guy did not install this panel. It appears to be fed by a 4-wire feed - note all grounds and neutrals are carefully segregated. So this must be a post-2008-style subpanel fed from either another panel, or a main disconnect/breaker elsewhere. (in NEC 2020 style; some cities have required this for 50 years, probably the same reason for the 4-wire feed). So look for a main breaker or main panel elsewhere.

Despite the age, it's not a split-bus panel because it's apparent the panel is all original, and all the 240V breakers have been put down the right side (a best practice that's impossible on split-bus). So, main breaker elsewhere.

If you can't find a main disconnect, all these breakers "rock out" - push further outward on the handle and the whole breaker will unclip from the bus (which is in the middle). Then the heel comes off its little hook and you have a breaker in your hand with wires attached to it. (which is fine; it became de-energized when it unclipped from the bus). This, by the way, is why backfeed breakers must be bolted down. So you can pop breakers off a live panel, change their wires with the breaker in your hand, and snap them back in. Have the breaker be off so it doesn't arc when you clip it on.

Note that you need a torque wrench or driver to set the screw torque correctly. (NEC 110.14). That's serious business that has been traced to many wire burn-up's.

Unfortunately, you'll be doing this a lot. Challenger panels are fine, but Challenger breakers had a VW-like scandal where it turns out they had rigged their UL testing. So they don't trip reliably and must be replaced. The good news is that BRyant inherited the bus design and kept it for their own BR breakers, and their line is made by Eaton. Eaton BR is the most popular breaker line in America, and if you look on the breaker it says "Type BR / Type C" (you need Type C).

So all the breakers need to be replaced, but it's still under $100 for all of them. That's about what you were going to spend on the 2-pole GFCI!

On retrofitting a too-small ground:

This is a universal problem: grounding the 30A dryer. With a universal answer: "NOPE". The wire is too small.

14 AWG is smaller than 10 AWG, so it is not a suitable ground wire. In the case you link, that person's #16 ground wire was legal when it was installed, and is now grandfathered because the owner can point to the date on the building permit. Your de novo use of #14 on a 30A circuit is not grandfathered, and has no date because it has no permit. (it may not need one).

AFCI is Arc Fault Circuit Interruptor. It uses a digital signal processor to "listen" for arcing on the wires. What you just described is a GFPE (weak GFCI that operates at 30A instead of 5mA threshold). AFCI and GFPE are not the same thing. However, some implementations of AFCI do include a GFPE as a "cheap" way to detect H-G or N-G arc faults (since they are also ground faults). Those would work; however 9 years later when it starts nuisance tripping and you replace it with a year-2031 AFCI, that year-2031 AFCI may not have any GFPE at all. Indeed, GFPE-absent AFCIs are already on the market.

As such, if you want GFPE, use a GFPE or GFCI, not an AFCI.

Not the answer you're looking for? Browse other questions tagged wiring grounding 120-240v or ask your own question.

28
Is it OK to borrow a ground wire from a different circuit?