How to replace under sink plumbing?

I need to replace the trap under my kitchen sink with one with a horizontal nozzle. However, the new trap won't quite fit.

The existing situation is in the below photo. The outgoing pipe from the existing trap (green dot; waste pipe?) is slightly higher than where it would be for the new trap.

I've struggled to find anything online about it because I don't know what to search for - in most of the stuff online the trap connects to a neat pipe that goes into the wall. Instead here I have a curved pipe (red dot) that leads to whatever that grey thing is in the bottom left of the photo (blue dots). The curved pipe and its parts can't be pulled apart or twisted, not by hand at least.

My key question is - how can I connect my new trap, with a slightly lower outgoing pipe? A subsidiary question - what's the right terminology for the things indicated by the red and blue dots? 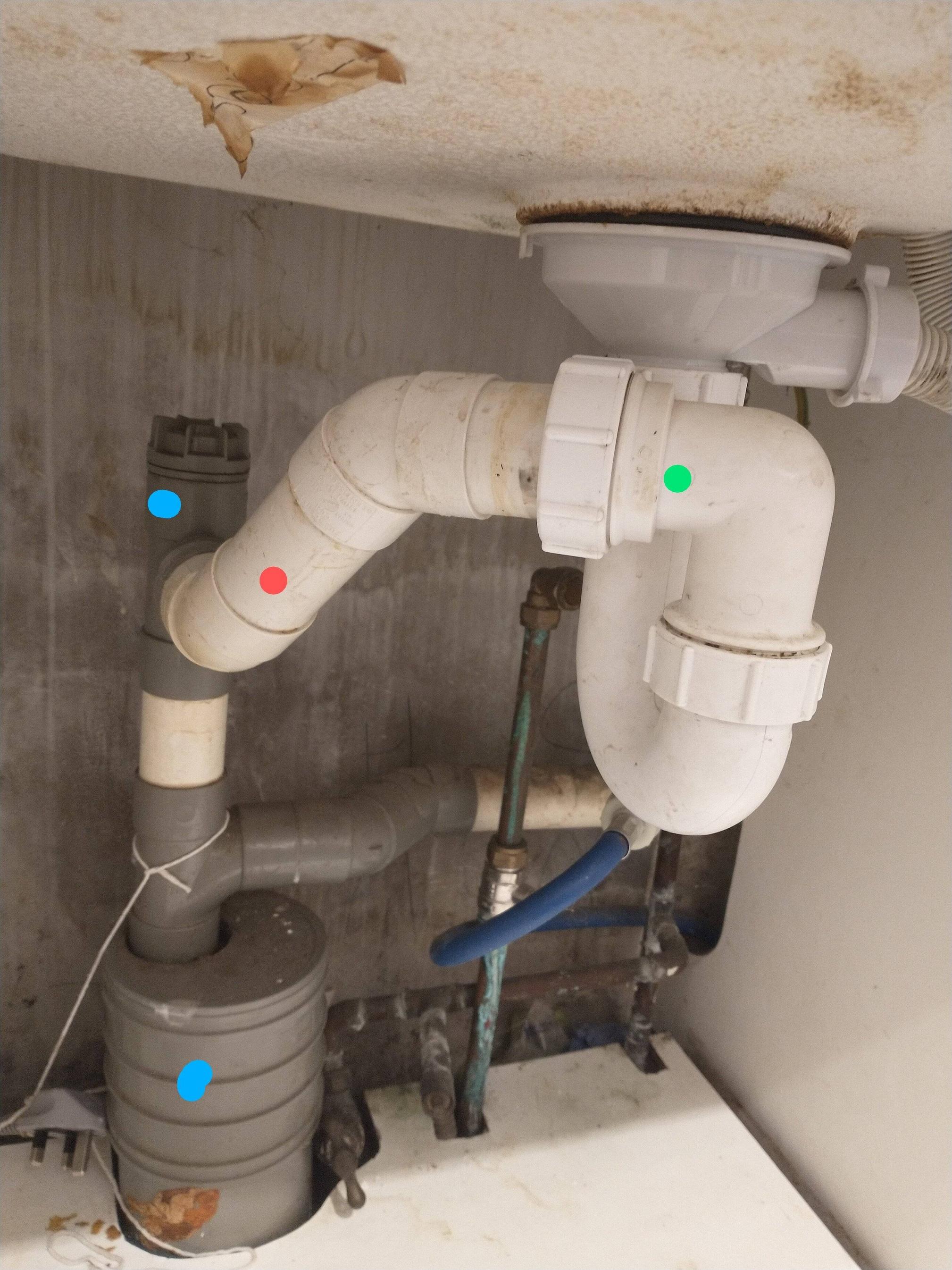 However, if you're set on using the trap you have in hand...

You cannot undo the section of piping identified by the red dot because those fittings have been glued together. There are techniques for undoing the glue, but people seem to have varying levels of success with those techniques, most, from what I've seen here, fall into the "little to none" category. Instead, you'll have to cut the pipes off. This will require a small hacksaw or pipe cutter. In either case, be sure to make your cut nice and square to the pipe, or you may end up with leaks when you reassemble new pieces.

You would have to replace this plumbing all the way to where it screws into the grey Air Admittance Valve (AAV) (it does screw into that, doesn't it?), or, possibly, by cutting the short straight section that has the actual dot on it.

You'd then recreate this creative bit of plumbing, but make it a little shorter so that the inlet end is lower to match up with the outlet of your new trap.

You might be able to get away with cutting the vertical white pipe between the two grey pieces (AAV on top and "dump trap"?) on the bottom. Shortening that vertical white piece would allow you to move the whole assembly down to meet up with the new trap.

I'm not sure what, exactly, you mean when you say that the new trap has a "horizontal nozzle" since it seems to me the existing one has a horizontal exit, as do all the ones I've seen installed in my house or at the store. However, you have the pieces in hand, you'll have to do the fiddling to make it fit.

3
What's the purpose of a cold water expansion vessel?
5
Should second trap under kitchen sink S-trap be there?
0
Clearing out blocked weeping tile
1
Electrical Bonding of Service Panel After PEX Replacement of Galvanized Pipes
2
What material is my waste stack made of, and what can I do with it?
0
Pressure guage full of water and leaking
2
Simple under-sink plumbing redirect
1
Which of these options is the safest/most efficient method to plumb a kitchen sink drain in an island?
0
New sink plumbing advice