What happens when you test a smoke detector?

When you press the test button on a smoke detector it obviously beeps, but I'm assuming it doesn't just test the speaker. So, how does the test work? I can't see a practical way to release smoke within the alarm itself, so does it use some other measure in order to break the flow of radiation?

Ionization smoke detectors use a radioisotope to generate a very small electrical current, which when interrupted causes an alarm to sound. These types of alarms use a metal–oxide–semiconductor field-effect transistor (MOSFET) to prevent the alarm from sounding, as long as the tiny current is flowing from the detector. 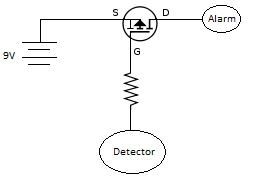 If you add a normally closed switch to the circuit, like so. 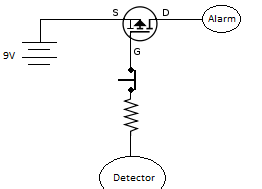 Opening the switch will prevent current from flowing to the gate, simulating a loss of current flow from the detector. Which in turn, will cause the alarm to trigger. 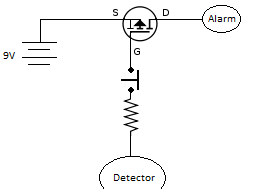 So when you press the test button on an ionization type smoke detector, you're not actually testing the circuits ability to detect smoke. Rather, you're testing the circuits ability to react to a loss of current flow to the gate contact of the MOSFET. You're also making sure the battery is not dead, and has enough juice left to sound the alarm if need be.