How to check if nails hit cable before turning power back on?

I had some seismic retrofit work done which involved them putting up 3/4" plywood with lots and lots of these big 2 1/2" nails. I had the power off to this wall while they were working. I don't think they marked the wire or put up plates. The wire was set back 1 1/2" from the edge of the studs per code, and with 3/4" plywood those nails can still hit wire. How can I safely ensure the wire is intact before turning the power back on?

You could pretend that you're trying to identify one network cable in a bundle and use a tone generator and probe. Attach the tone generator to the conductors and then probe every nail. (image: fiberoptics4sale.com) 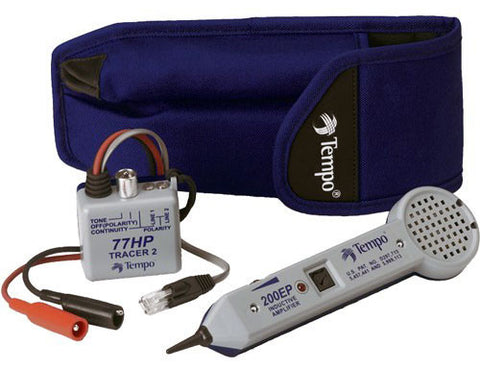 One surprising but useful trick is that the human body conducts the tone quite well. A person can put their fingertip on the tip of the probe, then use another fingertip (even on the opposite hand) to quickly brush across a bunch of bare terminals. That is (or was!) a routine trick for folks working on analog telephone systems. I'm told that once in a while one would drag a finger across a pair that just happened to be ringing at that moment (90 volts AC), or perhaps across a pair with a T1 data circuit (130 volts DC!) and that was a thrilling experience. But I digress.

This is just a slightly faster version of testing for continuity across each nail head. If you put a finger on the probe and with the other hand swipe a fingertip across each nail's head you should quickly learn whether any nail has conductivity to the electrical conductors, and in case one is found, you'd know exactly which nail and therefore the precise location of the fault to be repaired.

If you want to test electrical insulation you use an insulation tester.

A multimeter will find some, but not all, dangerous situations.

If both ends of the wire are visible, I usually pull on the wire to see if it will shift in the hole. If there is a nail in it, it will not move at all.

Even if you may not be able to see the other end, with pushing and pulling the wire, you should be able to tell if it is moving along its length or bending because it is held by a nail.

The down side to trying this with out seeing the other end is the wire could be held by a properly placed wire staple that you do not see, and it would appear the wire is not moving the way you need it to.

9
Find which ends of cat5e cables belong together

13
How do I troubleshoot power receptacles?
2
I ran into two hot lines when replacing a three way switch
0
Can induction in parallel ungrounded cables lead to false continuity readings with a multimeter?
1
can i use a sheet of 26ga aluminium instead of a 1/16" steel plate?
5
GFCI seemed to fizzle and pop, and now works as a non-GFCI outlet - what happened?
4
Intermittent power outtages to only part of the house. Power can be restored by turning the stove on for just a second, then turning it off
1
Low Voltage Home Wiring
0
What to do when measuring voltage on nails in the wall?