How to Wire a Light, GFCI Outlet, Switch and 2 Outlets on a single circuit 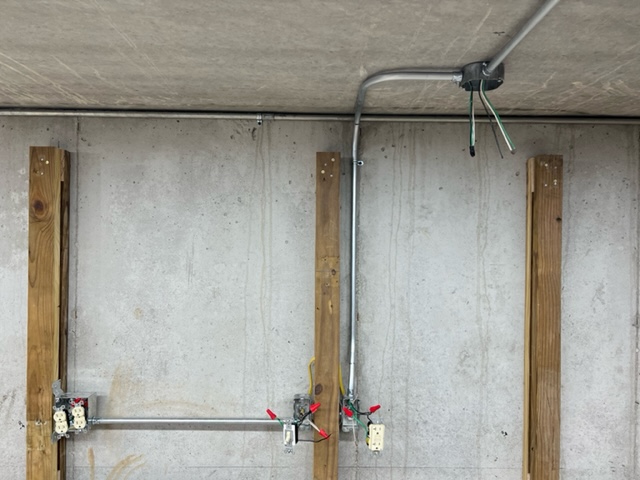 I'm wiring a miter box station in my woodshop. Wiring is 12/2 w/ground on its own 20AMP Circuit. Power source is coming from breaker box to a single ceiling light above the miter box.

Thanks for your help.

It's all about GFCI discipline. Since you want to use downline protection for the GFCI, you have to be extremely fastidious about Line vs Load. So...

The incoming always-hot wires from the service panel get attached only to the GFCI "Line" terminals. They are the only wires that are attached to "Line". Nothing is pigtailed to those supply wires, either.

All other hot/neutral wires are attached or pigtailed to the "Load" terminals.

That means, to power the lamp, we have to double back to the lamp with both switched-hot and neutral. We can't power the lamp from the neutral that is "passing through" because, that would be "pigtailing to it" and that's a no-no.

Further, you must identify this "special, GFCI protected neutral" so it can be distinguished from the supply neutral running through the same conduit.

The incoming always-hot black & white wires from the service panel get attached to GFCI "Line" terminals. However:

All other hot/neutral wires (all of which will be associated with the lamp or switch) are attached to the "Line" terminals. Note that Line terminals can accept 2 wires per screw (read the instructions for how).

In this case, the lamp can tap the netural which is "passing through".

GFCIs and switches inside the same junction boxes are rather confusing. It can help to put the GFCI in a different junction box than the light switch.

You're using a basic 99 cent "Handy-Box" to install the GFCI into. I have successfully crammed GFCIs into those, but it took all my skill - those boxes are very claustrophobic for a bulky GFCI. I vastly prefer using a 4x4 box with corner screws, with either a 1-gang domed cover or a 1-gang mud ring depending on whether a wall finish is going up. This gives lots of elbow room for a single GFCI device.

I prefer to use special colors for GFCI protected hot and neutral, e.g. blue and gray (gray being a legal neutral color). Lacking a variety of wire colors, feel free to use colored tape. (home stores have a 5-spool rainbow pack for $5). Since your wires are individual wires in conduit, colored tape on neutrals does not have the effect of declaring it to be a "hot" wire, and you are free to use the tape for circuit identification (in fact, you're required to).

EMT metal conduit serves as a valid grounding path. There is no need for ground wires; that is "belt and suspenders". I only do it if I expect physical damage to the EMT. However, if you do run ground wires, they must go to the metal box FIRST -- do not bypass the box and take the grounds to the devices like you would in plastic/Romex work. The good news is, devices will "pick up ground" in most cases:

You'd simply pull from the most convenient junction box which has a constant hot cable. You can't come from the light box if it's actually a switch loop, or from a switch box that's a loop. You need to create a new circuit branch in parallel with the light loop, wherever it may be.

Then it's just a matter of connecting the source to the line and the downstream outlets to the load on the GFCI.

Since you're operating motors with heavy load, use pigtail connections rather than passing through the outlets via their screw connectors.

Not the answer you're looking for? Browse other questions tagged electrical gfci workshop or ask your own question.

6
How should I wire a GFCI outlet and a switch to isolate the switch but provide GFCI protection further in the series?
0
Taking power from double light switch to GFCI outlet
2
GFCI outlet/switch combo installation?
1
How to wire a switch-controlled GCFI but retain downstream protection even with switch off
0
GFCI Trips Single Pole Switch
2
Electrical: Wiring a dimmer switch in a circuit with fixture, outlet, another switch powering 2 other fixtures
3
How to test two-prong retrofit outlets downstream of GFCI
0
How to wire GFCI combination switch/receptacle
3
Why don't downstream outlets work after replacing a GFCI outlet?
1
Can a GFCI power a light and a switch in this order?