How to repair this split ceiling joist?

While installing some new recessed lighting in my attic today, I noticed this split in one of the ceiling joists. The split is about 4 ft 6 in long starting from the end of the joist. The joist is a 2x12 and is about 19 ft long. The joist is only supported at the ends; there are no other walls or supports underneath it. 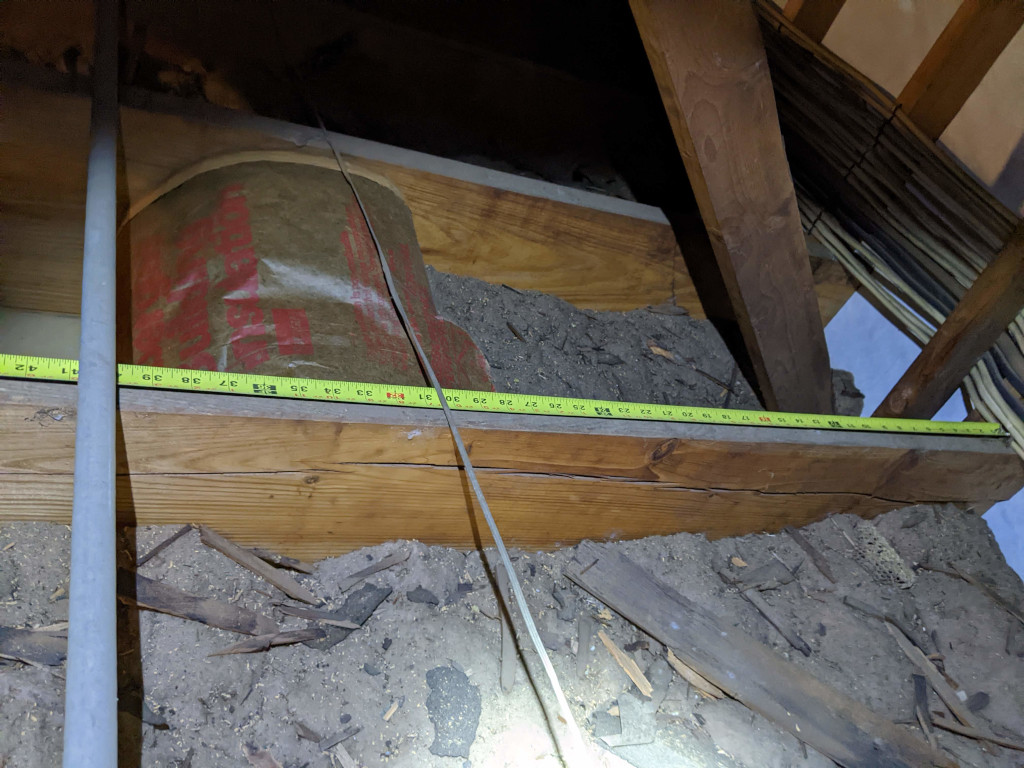 How urgent is it to address this? What options do I have for a repair that would be acceptable? The only way I could get another 19 ft joist there to sister the entire joist would be to open up the ceiling.

The house was built in 1979. It is a single story house in a sort of U-shape: 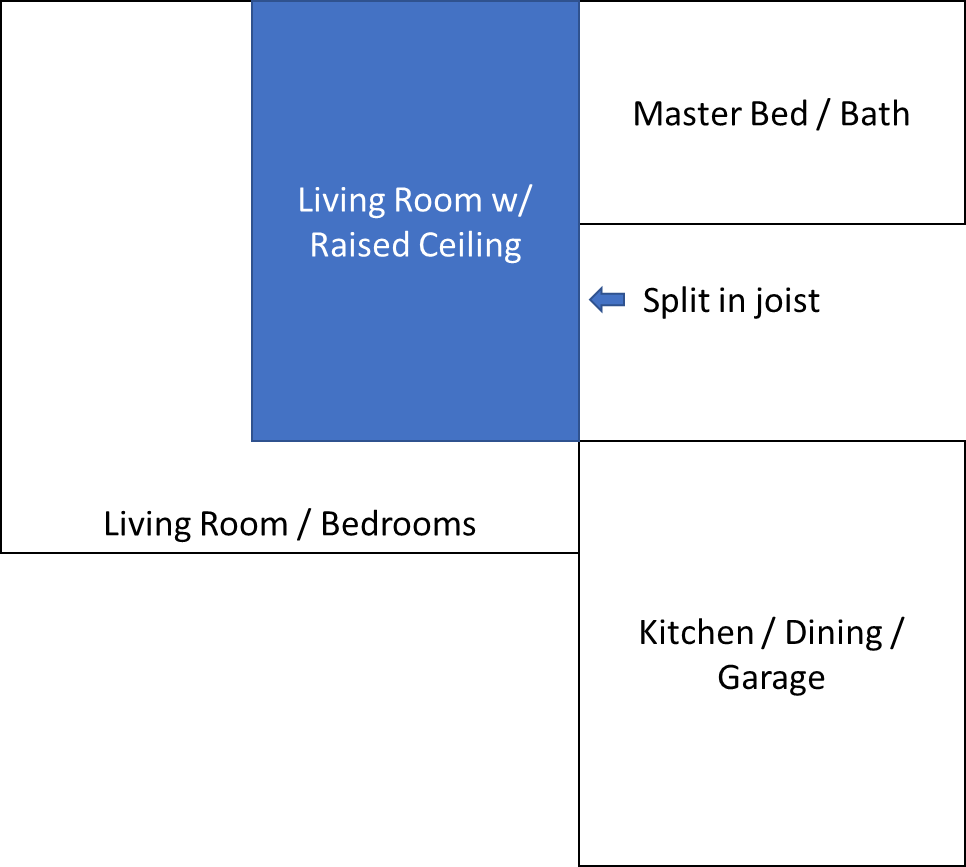 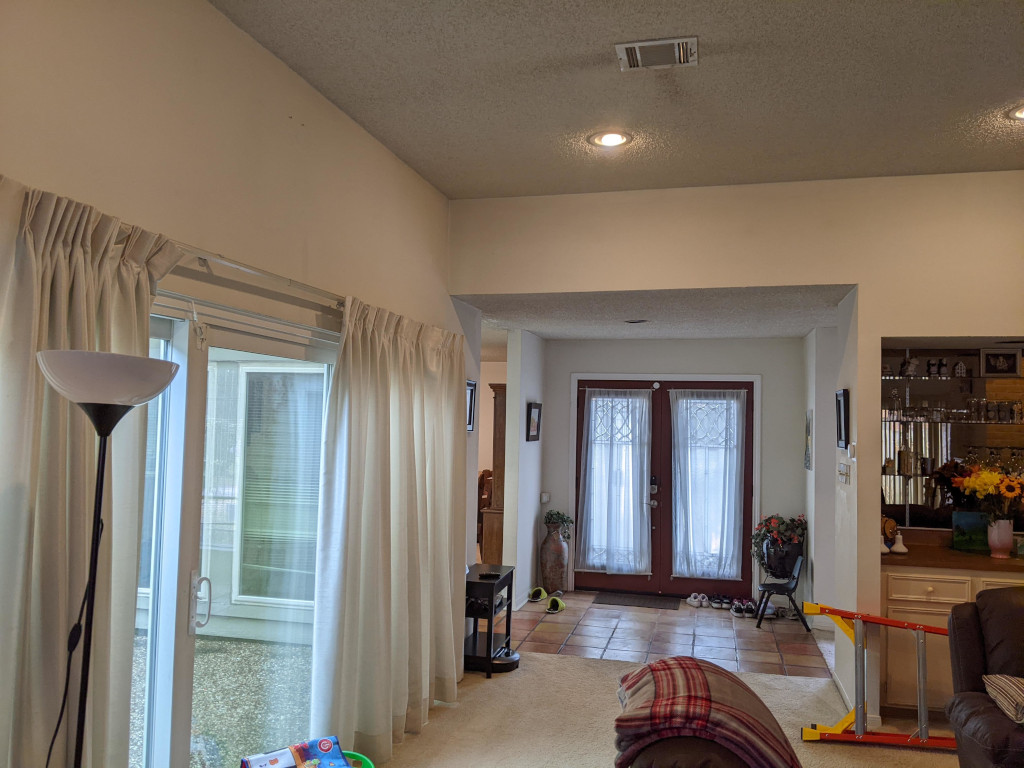 Here is a view of the ceiling looking the opposite direction. The joist still runs left to right across the picture: 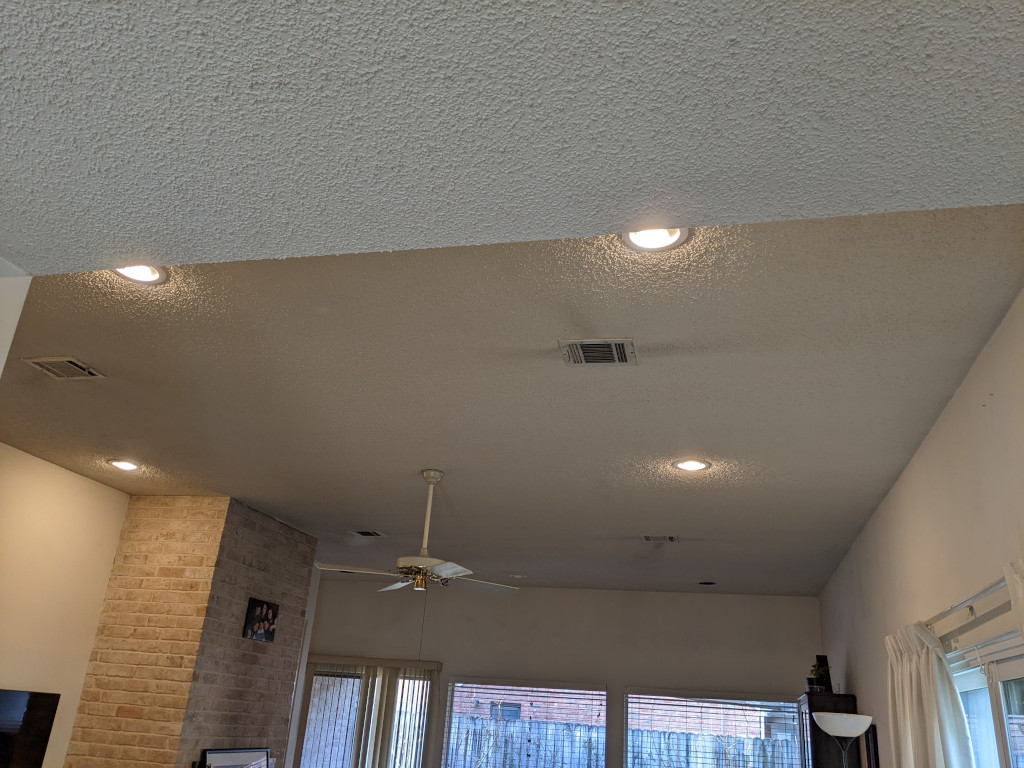 This is a view in the attic looking towards where the joist is split. This picture shows how the ceiling is raised. The ceiling joists run from the front of the picture to the back and are perpendicular to the rafters for the roof. The split is on the far side of the attic: 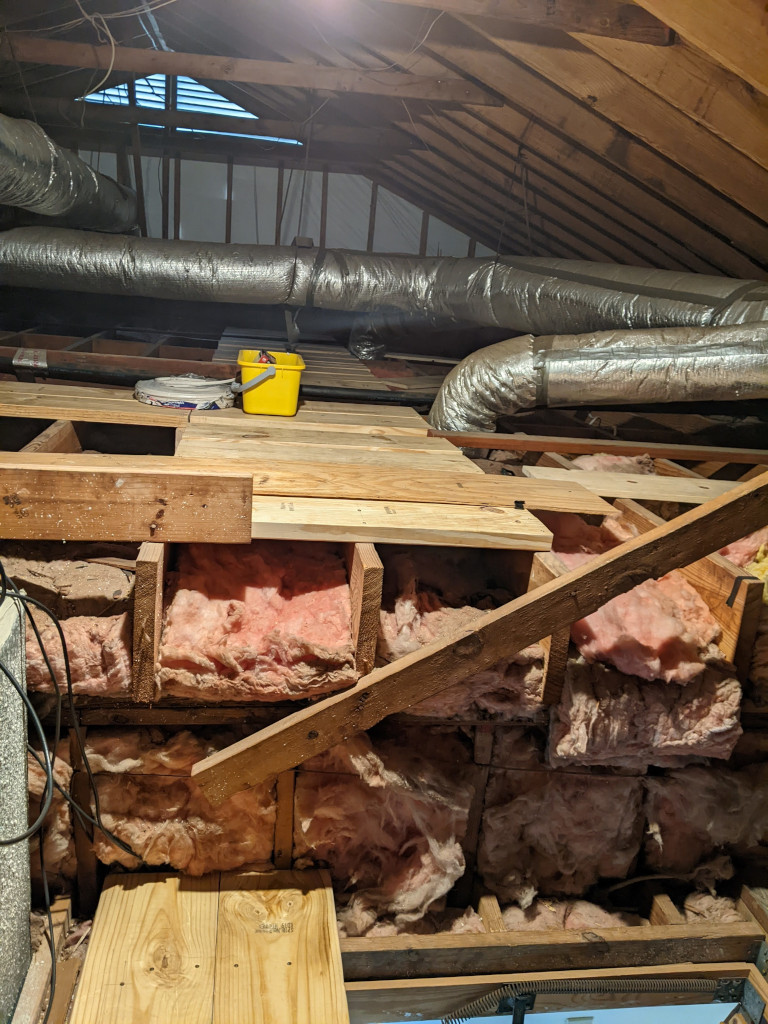 This view shows a close up of how the joists are supported in the foreground of the previous picture: 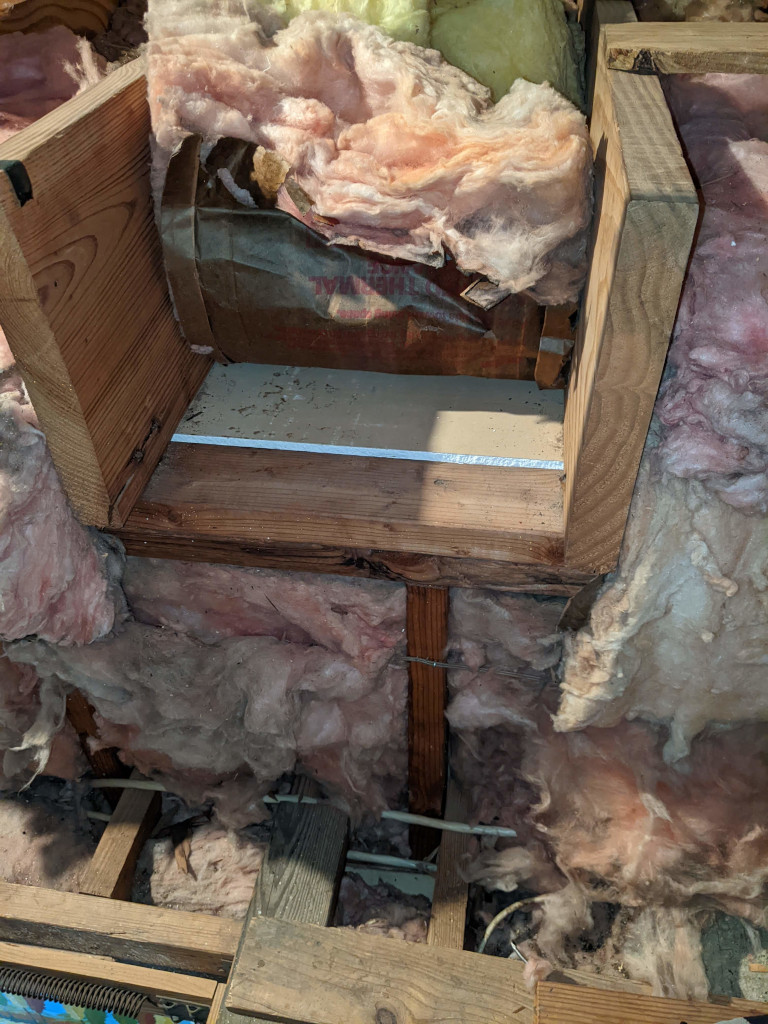 This shows how the joists are attached to the frame on the far side (where the split is): 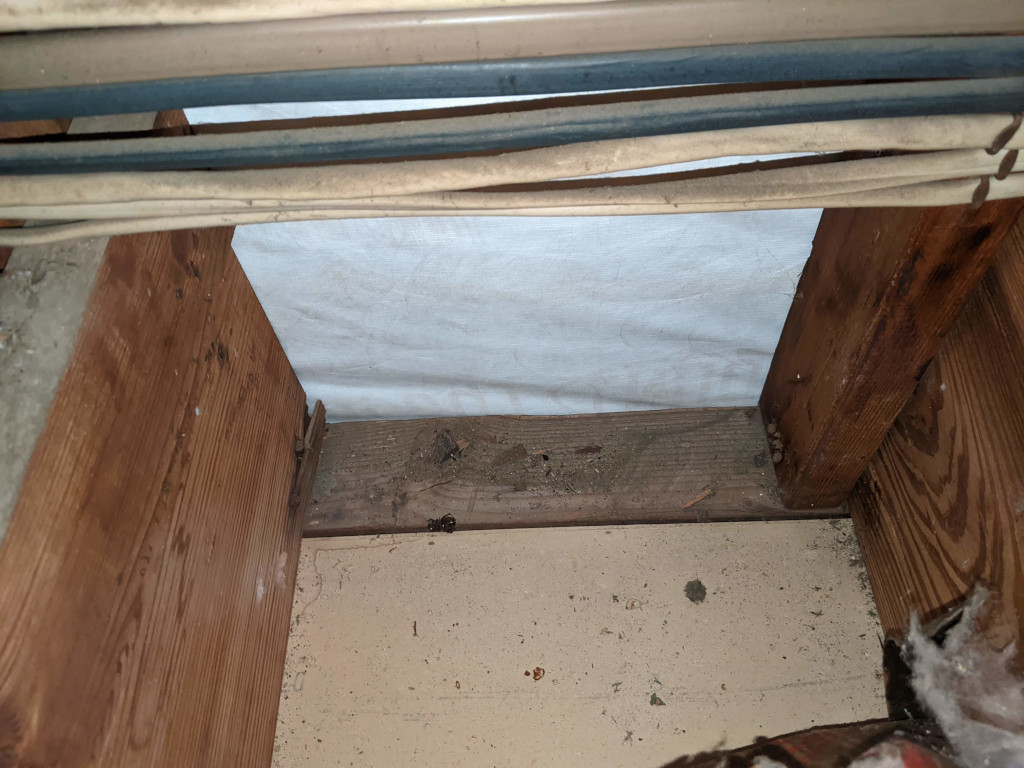 Here's what the nearly final result looks like (I still need to replace the block that was between the joists): 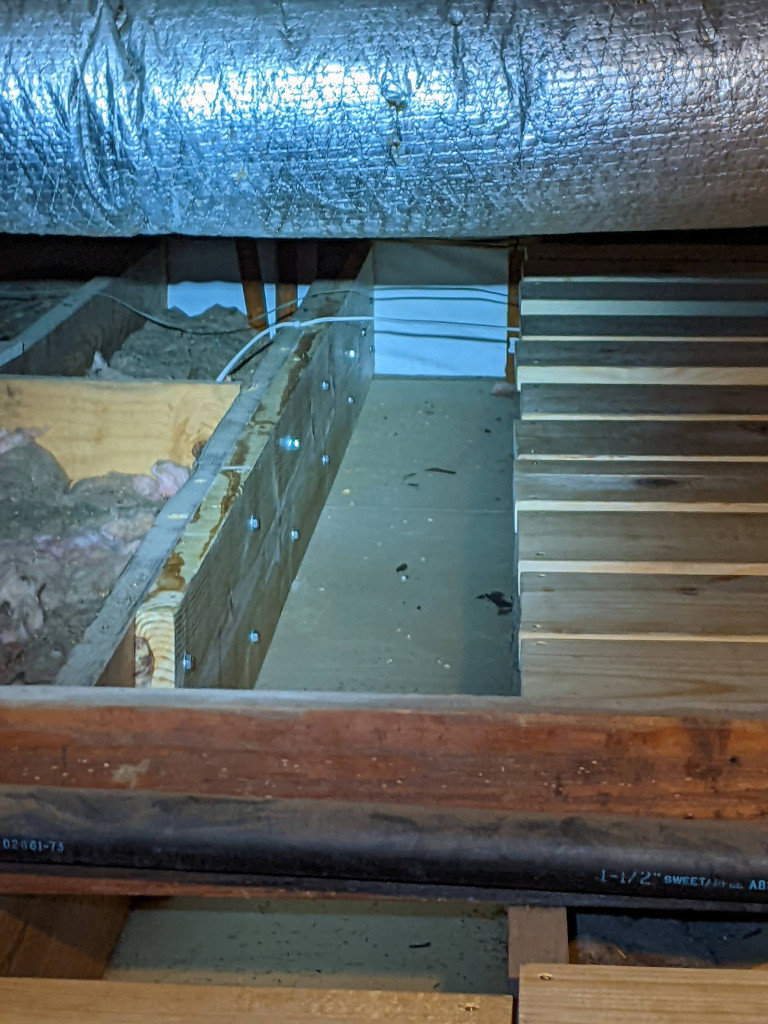 I was able to get a 10 ft board in place to sister with the joist with the split. I used pairs of 3/8in bolts spaced about 24 in apart to bolt it together. Near the split, I put the bolts below the split and put one extra one in. I used construction adhesive between the joist and the sistered joist.

In the area that was split, I also drove a few 8in lag screws vertically through the joist. It wasn't able to close the split, but hopefully it helps: 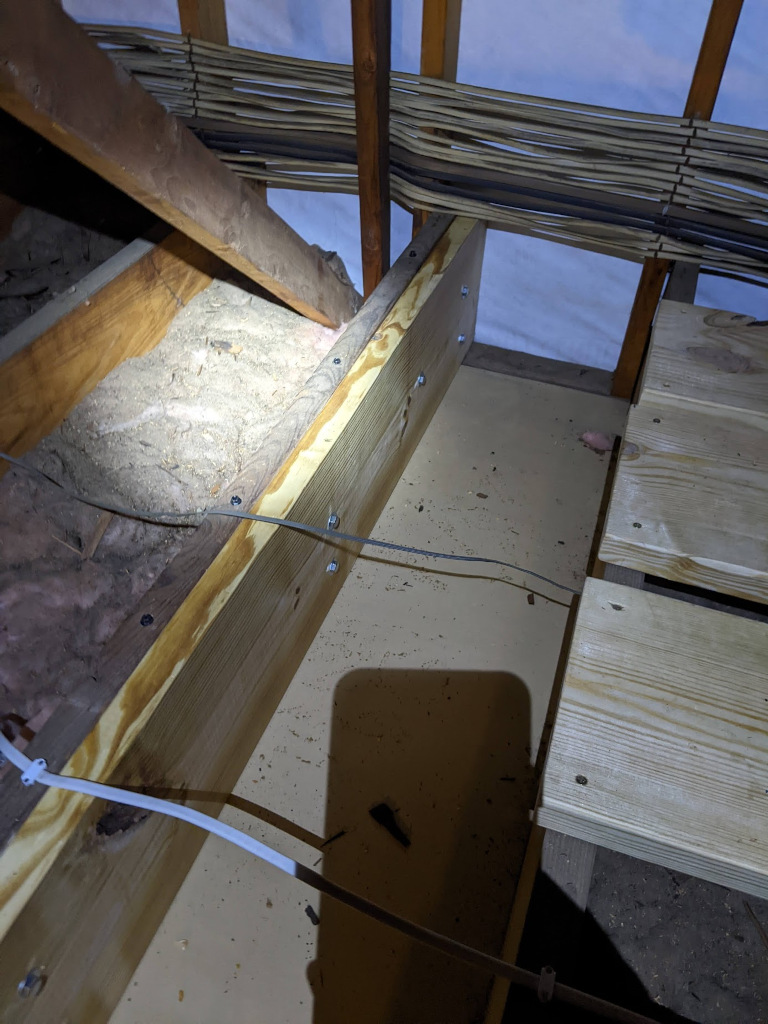 I'll start off by saying that nothing you read on this site or anywhere else is a substitute for an on-site professional. There may be aspects to the situation that we can't see and you weren't aware are critical. You should have someone local take a look. That out of the way, here are my thoughts.

This isn't an urgent situation.

One option would be to simply slather some construction adhesive in the cracks and run long timber screws or light-gauge lags down through the joist every foot or so to bind it back together. Pilot properly to prevent new splits, especially in the portion of the joist above the crack--it'll be quite brittle.

I can't tell with certainty how much clearance you have for more elaborate repairs, but I get the impression that you could slide in a new member alongside the cracked joist for sistering. Even if you can get something in there that spans from the end to a few feet past the primary cracks, that should be adequate. Here are some suggestions.

Not the answer you're looking for? Browse other questions tagged ceiling attic joists or ask your own question.

2
ceiling joist storage expression
0
How to properly double on ceiling joists
4
Cutting ceiling joist for attic ladder install
2
Repairing Hole Drilled Vertically in Joist
1
Vertical drilling into ceiling joist for pilot hole
3
Which bolt pattern to sister a ceiling joist?
1
Sistering a split joist not code?
2
What size should sistered joists be when repairing a cut joist?
42
How to reinforce a joist with plumbing running through it?
6
How should I repair this floor joist that is too short?