I'm simultaneously installing a 50A NEMA 14-50 outlet in the garage (for ev charging) and running a line for a portable generator from just outside the garage, back to the panel. I'll be using PVC conduit between the panel and the garage.

The generator line will come into a new transfer switch where I'll have six selected household circuits.

I've read this post which is very similar but both runs are 110v. Also, the principle response says that the same ground can be used for both circuits but since in this case I'm using the switching subpanel I'm not sure if it still applies.

Neither one handles neutral separate from ground, so you make no progress on that front.

However both work OK with a "floating neutral" generator. You'll want to bond that neutral if you use it as a portable generator.

The interlock lets you throw over your whole panel, removing the need to choose circuits at install time. It works same as a 2-pole "big knife switch" style transfer switch, except that the big 200A side is handled by the breaker you already paid for. The $30-70 sliding plate links it with a $12 backfeed breaker, so together they function as a "DPDT center off" switch i.e. big knife switch.

What the interlock does with neutral makes it play well with panel features such as MWBC*, GFCI and AFCI. You must choose circuits so you don't overload the breaker, but you're free to do that "on the fly".

The way the "6-8-10s" handle neutral is appalling, and ripped right out of the 1960s mentality of wiring. They didn't think about generator isolation nor about overloading MWBCs*, and their method precludes usage with an AFCI or GFCI breaker. It's a complete gong show. These problems come up a lot, which is the reason for our disdain - we don't like people spending $300+ and then having this much trouble. In most cases, send it back with a vengeance. Or sell it on Craigslist to someone who needs it.

They do have applicability in a minority of panels, which are too obsolete to be well supported with interlocks, or whose design precludes an interlock (the otherwise excellent Pushmatic). However, such older panels tend to be stacked with MWBCs, and those cannot be safely/legally connected to a 6-8-10 type (unless put on a ganged switch, as they must throw together), and that forces you to use 2 of your circuits, when you probably only want one side of that MWBC.

So yes, if you can find a suitable interlock for that panel, it's a fantastic way to go, and a real money-safer to boot.

A feeder and a circuit in the same conduit

This is legit. It's a bit easier to see that it's legit when the feeders are going to the same panel, so that's a tick in favor of "interlock".

2 circuits in the pipe causes a thermal derate, though

Having 2 circuits in the same conduit/raceway means they must both be "de-rated" to 80% of their insulation rating (which is 90C for most wire and cable types). 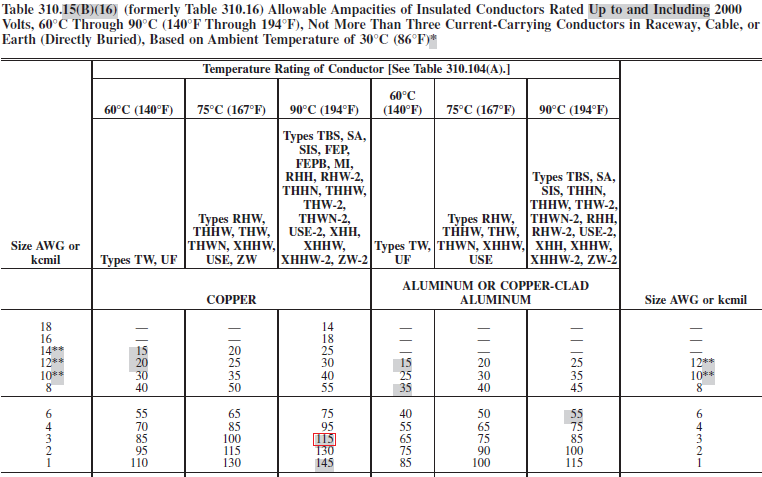 Take #6 aluminum (or #8 copper) THHN. Assuming our terminals at both ends are rated 75C/aluminum, that wire is good for 50A if it were alone in the conduit.

However, with two circuits (4 conductors that count for thermal derate purposes) apply an 80% derate, of the maximum insulation rating of that wire. THHN is 90C wire, and is allowed 55A @ 90C. We derate that 80% and we're down to 44A. Well, that stinks!

A 50A outlet is a "starter setup" for EVs. Down the road you may want more, so I might as well tell you now.

EVSE is the awkward word for "the charging equipment on the wall".

First, in NEC 2020 jurisdictions, a NEMA 14-50 socket requires GFCI protection. You do not want that. Why not? Because the EVSE equipment already has a much better GFCI in it. First, the internal controls aren't on GFCI so they stay up. Second, UL has approved this GFCI to automatically re-close - if it trips, it will make several attempts through the night to self-reset. Since most "nuisance trips" are momentary events that clear themselves, this means you awaken to a charged car not a tripped GFCI. General purpose GFCIs can't do that. So in some locations, if you have a socket you are married to a useless, redundant GFCI. The solution is to hard-wire the EVSE.

If you don't want to rewire because you're using the "thrown-in" mini EVSE that came with the car, that one is really intended to be carried around in the trunk for opportunity charging (sort of an EV version of jumper cables). That will get "old" PDQ and you'll wish for a wall-mounted version. Look for a "Share2 enabled" EVSE, which has the hardware support for "power sharing" with a second EVSE. That is the next state-of-the-art. Note that Tesla Wall Connector V2 and V3 have that - and are bargain priced at $500, but need a $100 adapter to charge non-Teslas.

Share2 calls for connected EVSEs, that share a single allocation of power (reasonably close to what your EV feeder can permit). Say you have 80A to provision, you tell the EVSE "master" that, and it coordinates with the Share2-enabled EVSE's to make sure load doesn't exceed that. They communicate with the cars to work that out. **

So if it were me, I would "pencil in" the idea of running three #2 aluminum to a 120V/240V subpanel. I would size conduit for that. That is good to 80A (because of our derate, ouch) and will support the foreseeable future in EV charging, plus a couple 120V circuits for lights and receptacles too.

* A Multi-Wire Branch Circuit, or MWBC, is a circuit typically run on /3 cable. It has 2 hot wires (red and black) sharing a neutral. It's a way to economize on wire. The hot wires must be placed on opposite phases to prevent the neutral from being overloaded. These tend to be a mess in older panels. The handles must also be tied, so that a maintainer is switching off the whole circuit (and doesn't get "bit" by current trying to move on the neutral.).

** How does a car listen to the EVSE? The EVSE puts a square wave on the Control Pilot pin. The duty cycle maps to the max amps the car may draw. The car's internal charger takes it from there. How does the EVSE listen to the car? It has a current sensor so it knows what the car is drawing. So the EVSE can see the car is only drawing 21A, and change the Control Pilot signal to authorize only 21A, and give the rest back to the pool.

Not the answer you're looking for? Browse other questions tagged receptacle conduit generator or ask your own question.

1
Any issue with running 240v and 120v THHN in the same conduit and can they share a ground?
6
Cat 5/6 in same conduit as power: is NM-B required, or is THHN acceptable?
0
Out Building Circuit and Hot Tub Wire Run?
4
Changing 220 15 amp to 220 30 amp. Present circuit is in conduit with two other circuits. Need some advice
0
RV Pedestal - 20 AMP GFCI & 50 AMP 14-50 in same 2 Gang Box?
1
Wiring for a generator Inlet and EV charger
0
To use any generator with the house inlet, may one leave the generator ground wire unconnected in the inlet?
2
Generator Hook-up to Main Breaker Panel
0
Transfer switch- only connect hot lines for circuit
1
Re-use existing 10-2 wiring run for generator interlock, AND feed both legs of panel?