How do I find a leak in a buried pipe?

There is a large amount of pipe of mixed materials buried on my two-hectare hobby farm by the previous owner. I do not know exactly how much or of what kind. Recently, a large leak appeared as detected by the water meter spinning rapidly which I know it was not doing earlier.

My question is - how to detect a hole in a pipe from the surface?

So far the ideas are - radioactive tracer, dye, air, smoke, and a stethoscope. I will try the stethoscope. The smoke idea sound interesting, but is a larger project that I will try to organize.

My question is not - how to isolate a leak by turning valves on and off, or checking out places where heavy equipment was, and so on. I am looking for a method of physically detecting a leak, which might be under 100 meters of loose rock retaining wall.

I Include below the question as originally posed and some more details.

For the record, if you wish to get more involved.

I have two hectares of hobby farm, most of which is irrigated. Recently, I found that while the irrigation system is off there is still water coming through at about the rate of an open domestic tap or shower. I can shut off the valve to the exterior irrigation, and the flow stops. So, the problem is there and not in the house or gardens.

Note: I greatly appreciate all the efforts from contributors so far and hope that together we can solve this. I will post the pathology if I find out what it is.

With that much water flowing I would have thought that the location of the leak would be obvious. But, I have walked the whole property looking for gushers or swamps and not found any.

How could this much water not be obvious on the surface?

How can this problem be solved short of digging up the entire irrigation system or replacing it?

This feels like it would make an great lateral thinking puzzle, but I don't know the answer yet!

I am wondering about trying colored smoke pumped in with an air compressor.

I replaced several valves that were jammed open and closed them - but it made no difference. I repaired a small leak discovered through a damp spot on the ground. But it was small and this did not noticeably change the problem flow.

For the record - I am an engineer and computer scientist so, believe me, I have tried all the tree pruning tricks of the trade. Every valve is turned off but the main one - with no luck. I am about to go out and try cutting into pipes and insert new valves so I can shut off other parts of the system.

The reason that naïve tree pruning does not work in this case is - from a computer science point of view - that we have only partial information. We have some of the node and some of the edges but we do not know how they are connected up.

Consider the following - I am going to put a valve in the line that goes past the tap. I wanted to put it in upstream of the tap. When I dug up around the tap it turns out that the line does feed the tap, but just goes past it. The feed for the tap looks like it either goes under 20 meters of retaining wall, or plunged 2 meters down to the lower level.

The soil here was unexpectedly damp - suggesting that something might be happening in the next level up.

More digging showed that the line to the tap goes under the retaining wall, and there is a second line that I did not even suspect that is parallel to it. Again - emphasizing why turning on and off of valves is not a viable process to locate the leak. 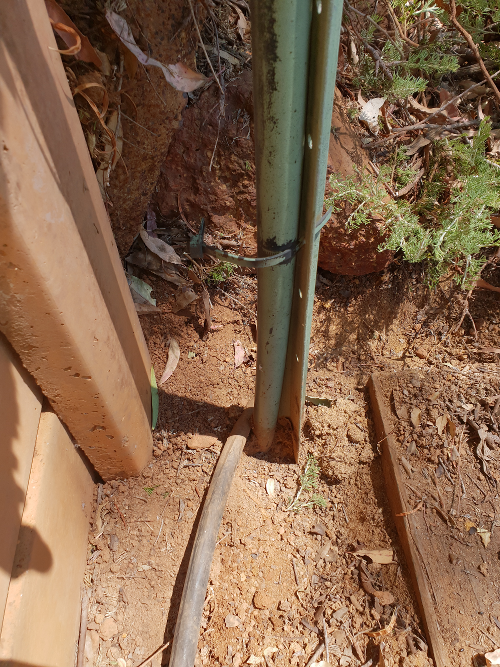 Based on everything you've written here's what I would do next:

I have two hectares of hobby farm.

All of this is irrigated?

Recently I found that while the irrigation system is off there is still water coming through at about the rate of an open domestic tap or shower.

How many linear feet of water line is this? How many joints, valves, stems, etc...?

With that much water flowing I would have thought that the location of the leak would be obvious. But, I have walked the whole property looking for gushers or swamps and not found any.

How could this much water not be obvious on the surface?

Did you let your irrigation system freeze over the winter?

Has any heavy machinery ran over your irrigation system?

When the system is irrigating do you notice worse flow at certain heads versus others?

How can this problem be solved short of digging up the entire irrigation system or replacing it?

You could add tracing dye inline to your irrigation system for a few days, leave it pressurized, and see if anything comes to the surface.

You'll obviously want to avoid running the irrigation system while the dye is being added.

Idea no 1: The farmers way. Identify an suspicious pipe. Place an shutoff valve onto the suspected pipe. Repeat until the water flow stops.

Idea no 2: Locate the affected section with an clamp-on ultrasonic flowmeter instead of randomly placing shutoff valves.

Idea no 3: Check with an infrared imaging system for leaks. Expensive though.

I take care of a sprinkler system at a church; over a thousand feet of buried plastic pipe. Most commonly I find a wet spot at a leak when it is running. Alternatively ,in dry weather, after the sprinkler has run, I walk the line and look for damp ground or very lush grass. I apologize that this is not very scientific, but it works in my heavy clay soil with poor permeability. This will involve digging for verification. I find a 3/8 in. diameter steel rod with a good handle is necessary to probe for the exact position of the pipe.

Not the answer you're looking for? Browse other questions tagged leak irrigation or ask your own question.

2
Is there a way to fix a leak in the pressurized side of a pool system without digging it up?
1
How do we prevent air in the water lines from our well?
1
How can I test if a PVC irrigation pipe is in use?
0
How to seal small leak in buried irrigation system
0
Does adjusting the body of a irrigation sprinkler to orient one side of the sweep cause a leak at the sprinkler unit?
0
Control irrigation pump
1
Looking for a irrigation system leak sensor? Is there such a thing?