I have to change my hvac filters too much

I had been having major allergy issues for a long time and had my HVAC duct work cleaned recently. I experienced a dramatic improvement in my allergies, but it was short lived.

I discovered that after the duct cleaning my furnace filter was covered in a THICK layer of dust. I would replace it and then a day later have to replace that one.

I quickly discovered that there was a HUGE pile of dust that had accumulated just before the air filter. An oversight from the duct cleaners, so I grabbed my own vacuum and cleaned it up.

That improved for a little bit, but I noticed I was having allergies again so I went down to find that there were new dust balls, and that the filter was again CAKED in dust. Fortunately there was less dust to vacuum up. I changed the filter and went back to bed.

This morning I'm having allergies again so I go down and check the filter. The filter is already gray with dust. There's no dust accumulating before the filter to vacuum up though.

Do I need to just keep changing filters until my house flushes out all the dust? Should I look at replacing my duct work? The duct work is very old and I don't think it was sealed very well. Should I make an effort to tape all the seams on the return duct?

How difficult is it to take down hard duct work and clean it by hand and hose myself? 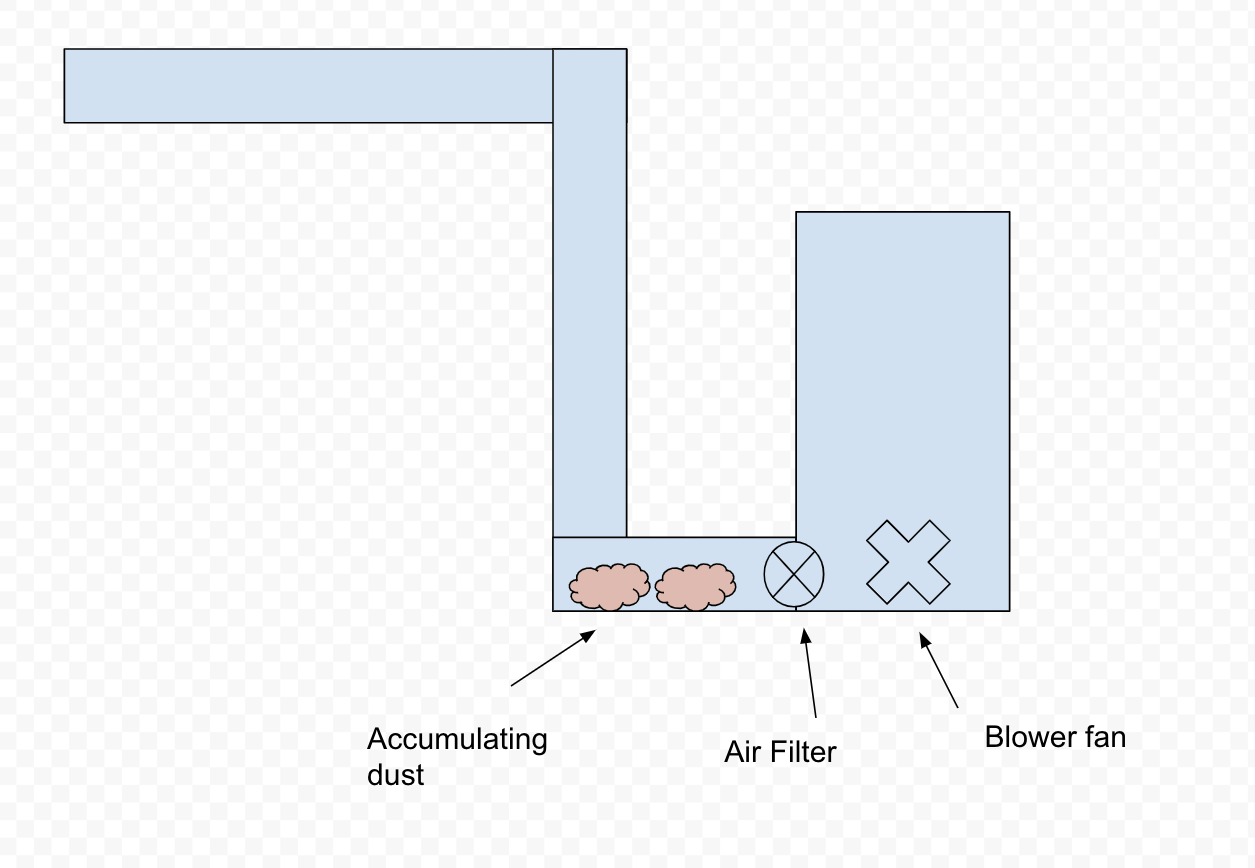 Most duct cleaning companies just make a lot of noise and insert vacuum hoses and compressed air hoses into the duct work and in the end show the customer a bag full of hair and dust balls. They loosen more dust than they remove. My sister-in-law, like you, had a lot of allergies, so she had her ducts cleaned. They did a terrible job, so she had them return a second time. When they were finished, I removed the end of the main line and the duct still had a dust blanket laying at the bottom of the duct. I used a shop vac with a lot of extension wands, pulled a burlap sack with old sheets inside for fluff back and forth through the duct and lastly pulled wet towels through the duct. The last thing I did was to install an electronic air cleaner and an upstream "medium merv" air filter. She ran the furnace fan 24/7 all year long to help clean the air in her home. This fixed her allergy problems when she was inside her home and gave her an allergy free space to live. It worked for her. After that, every house she lived in had an electronic air cleaner and an upstream medium MERV filter installed with the furnace fan running 24/7.

Duct cleaning is a racket. I had mine done many years ago, and shortly after I opened the end of a trunk to do some work (two small screws and the entire cap came off, but they didn't bother). There were huge rolls of dust mat piled up in plain sight. I poked a shop vacuum in there and sucked it up in a bunch of big slurps. Never again will I pay someone for this "service". I can do at least as good a job myself for free and actually care about the outcome.

In your case, all they've served to do is rile up accumulated dust. You can either continue to replace filters until things get back to normal, or you can try to find a better company with better equipment, or you can learn to DIY and take a crack at it. It's not rocket science.

There could be too much negative pressure (suction) acting on the joints in your ductwork. First, remove all the return grilles. Then set the blower motor to a lower speed. Then see how quickly the filter fills up. You may have to install an electronic air filter.

(if anyone has good recommendations or words of caution when disassembling duct-work I would love to hear them. When I feel confident enough I will probably take a crack at that.)

Alright,I'm following up on this. I was able to use @d.george's process which I will call "duct flossing". There is still definitely a lot of dust in the duct, but I think most of the large "clumps" have been removed.

I would like to follow up by running some wet towels through, but there's just so much dust in there that it would be great if I could just take down the ducts, wash them out, and then put them back up. Any advice in this area would be awesome.

Here's what I've done so far: 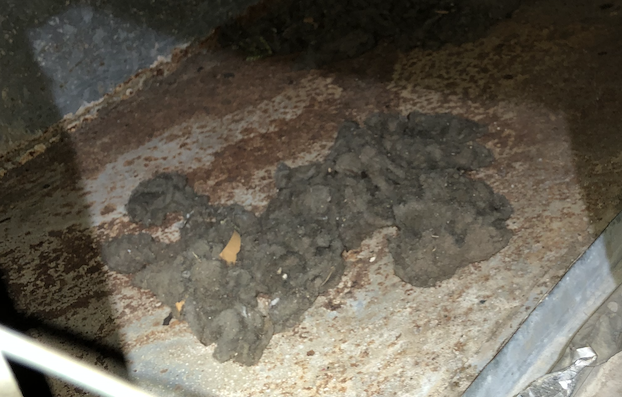 The final time I flossed the duct-work, I wrapped a towel and swiffer sheets and pulled it through once more. 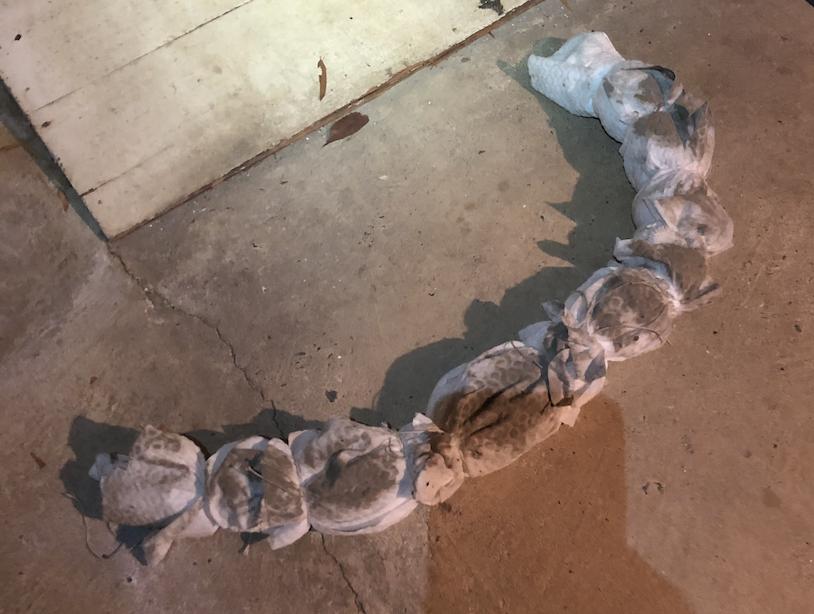 There is clearly a lot more fine dust in the duct-work. I would like to disassemble the rigid duct-work, but I'm not confident in my ability to return the duct-work to its original condition.

Here's the kite if anyone else needs inspiration. 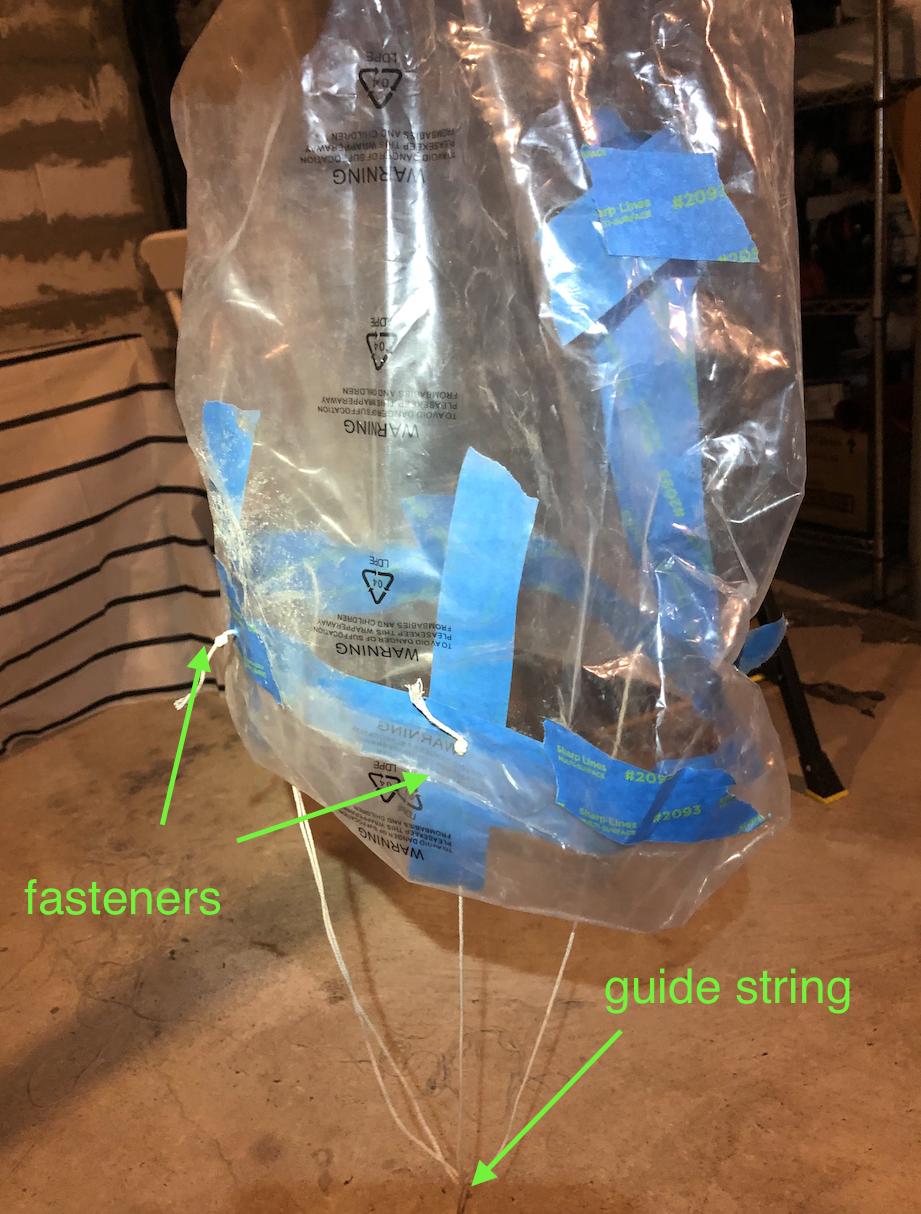 @Breedly, I would not recommend trying to remove the duct work or any portion of the duct work unless you have extensive knowledge of duct systems and how the are engineered and installed. Some duct systems are fairly easy to take apart and some are not. Where I live, some of the older duct systems were put together with what we called "Pittsburgh locks". These were not made to be taken apart. Anyway, I have to ask just why you would want to take the duct system apart? There will be no gain. If the dust and dirt is in the return duct work, which it probably is just clean it out as best possible and then let it alone. Any remaining dirt and dust will just remain there. Concentrate your actions on the furnace or specifically the air movement fan. Add filters and equipment to suit the quality of air you want to supply to the living space, don't overthink it.

If you have family members that have allergies do what I did with my sister-in-laws house. She had very bad allergies and could only live in my house until I could install her electronic air cleaner with high "Merv" pre-filters. This worked for her in every house she lived in. My 2 cents.

0
Allergies and an economizer
2
Does my furnace's air filter do anything at all?
0
Is it okay to use two 20x20 air filters instead of one 36x20 for my home AC?
1
How to keep house from getting so dusty with no HVAC system?
0
HVAC Air returns help. Please
1
Both reusable and disposable furnace filter?
0
Two filters in furnace