Replacing hardwood floor in 100 year old house with no subfloor

This is a 100-year-old, single family house in Washington, D.C. The floors are aged and worst of all terribly squeaky. The main issue we are trying to solve is to not have the floors squeak.

Unless we hear better advice here, I assume this means replacing the floors. As was typical for houses during this period, the second floor hardwood is installed directly on the floor joists - no subfloor. (On the first floor, there is subfloor made of diagonally running 3/4" boards with 1/4" finish parquet floors nailed to it.)

Clearly this is not how it is done nowadays, but installing subfloor is a much bigger job since the only way to do it well is to remove the stair railing, otherwise the new floor will be 3/4" higher, plus this messes with the height of the first and last step on the stair run (first step riser 3/4 shorter, while the last step is 3/4 higher).

Questions for the community:

Thanks a lot in advance for wisdom and insights! 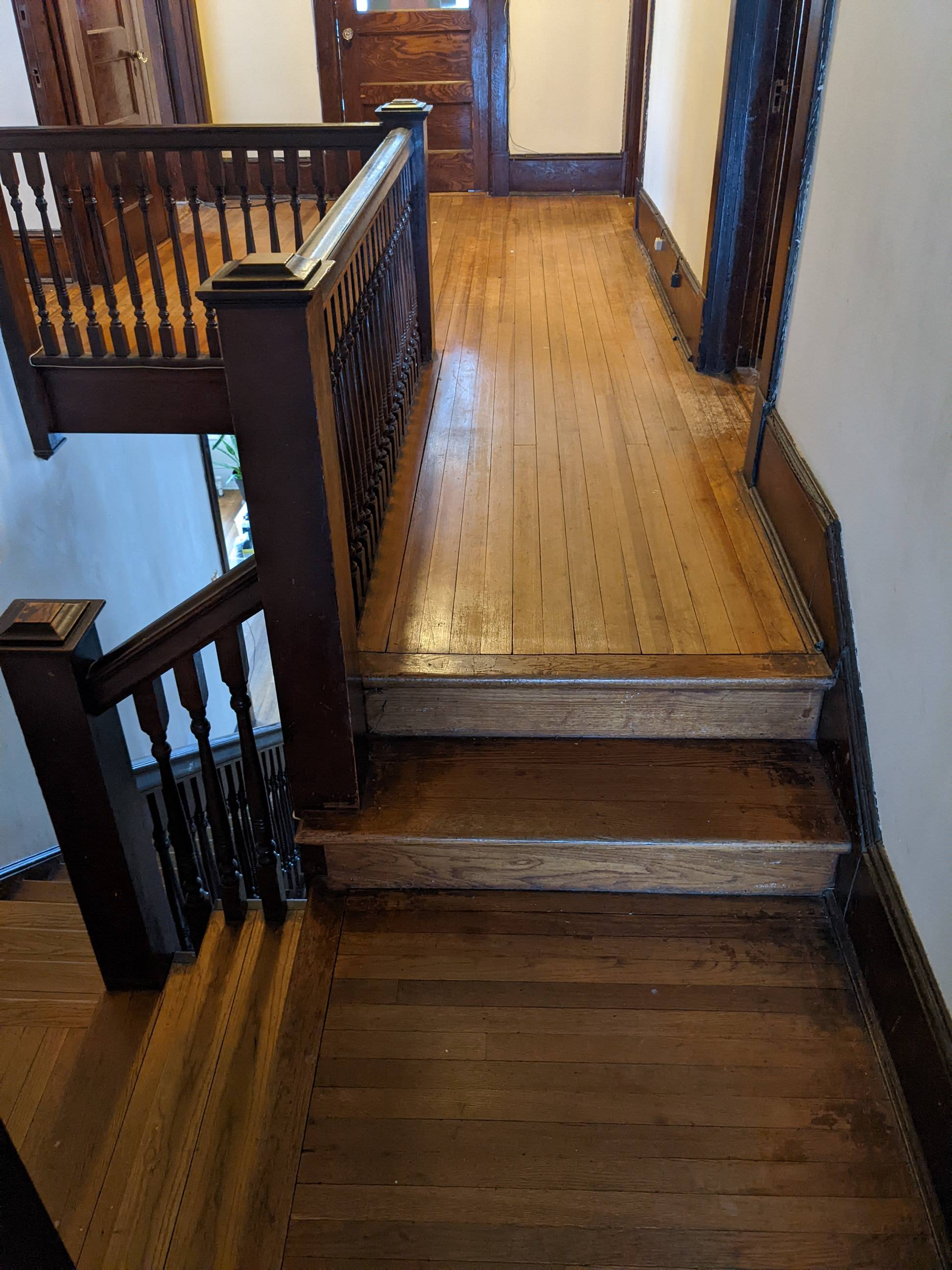 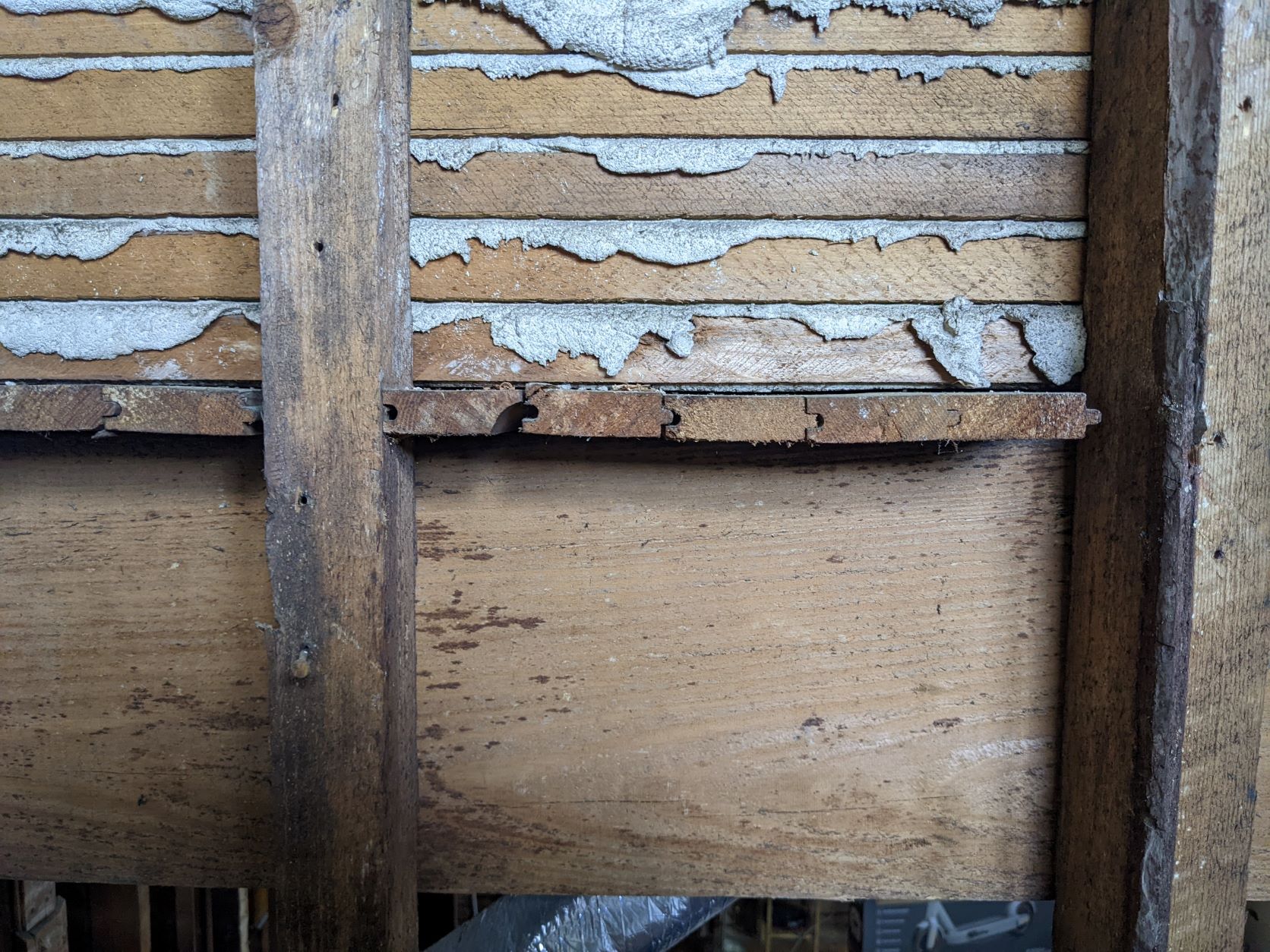 The squeaking comes from vibrations created when the floorboards and joists rub against each other when weight pushes down on them.

There's a chance that replacing the floor with a new one "in-kind" will result in just as much or even more squeaking. Probably not at first, when the wood is still slightly rough, and new, but as the boards expand and contract over the seasons, and slide against each other as people walk on them, the movement and pressure acts to kind of polish the wood where they touch, and it's those smooth surfaces that really make the wood sing.

One "classic" way to do that, if you have access to the underside of the floor, like in a basement or crawlspace, drive a screw at an angle up through the joist (on an angle) and draw the floorboard tightly down to the joist to prevent it from moving.

If you don't have access to the bottom of the floor, you can fix it from the top, but it's harder to do that 100% invisibly.

First of all, if the original floor is nailed down, get a hammer and a punch and try to tighten up the existing nails.

If that doesn't seem to be working (and it won't last forever...you might need to do this every few years if they loosen up again) you can put new nails in the face of the boards, or even better in the tongue between the boards. Use the punch to push the heads below the surface and, if you installed the nails in the face, use filler to hide the holes.

In less conspicuous places, a thin-head, finish screw can be driven down past the surface and filled to be virtually unnoticeable. Screws will help pull the boards down more tightly too, in some circumstances.

They also make special screws that are designed to have the heads break off once the screw's threads are embedded in the joist and floorboard. They're expensive though.

BONUS: I've also heard of people suggesting sprinkling talcum power between the floorboards and distribute it using blows from a mallet or hammer. The thought is that the lubricative properties of the powder keeps the moving boards from making noise when they rub against each other. I have no idea if this works, but it sounds like it might be a temporary fix. (I almost wish I had a squeak to test this on.) YMMV.

I will repeat some answers that you already have but, it is all part of my answers that will have different nuances.

To give my summary on the idea of floor replacement, and using the second picture in your showing the ledger, floor ends and plaster, shows the house is constructed using the "balloon framing" technique used at the time your home was built. That being said, and knowing how the homes of that era are built, replacing the floor outright will definitely have a lot of "gotchas".

Just like the picture, the outside walls are built with studs going from bottom sill plate at the foundation to attic top plate, usually with continuous studs, sometimes with lengths up to 20 feet long or longer (wood was plentiful back then). These are the only walls that are done this way.... typically... there may be exceptions, but that mostly happens at stairwells. In order to work at the second floor level. The finish floor was run over the entire second floor and the interior partitions were built directly onto the finish floor. This practice would make it really risky cutting up the old flooring, since many of the walls will have its support cut out from around the them. This is the "gotcha". All you would need is one wall to set on the flooring only and it would make the whole process impractical.

So with this in mind, it seems the only option is to better fix in place the flooring you have.

Here is what you have already read before: refasten the floor through the top surface and fill the holes. There should be no original nails visible to reset since they would all be "blind nailed". So re-nailing is the only choice, at least the simplest choice. In my opinion, since there is some skepticism about the integrity of the framing supporting you floor, therefore all the squeaks, I beg to differ. The squeaks in most cases are from the nails rubbing the wood floor. Back in the day when your home was built, there was no way to dry lumber like there is these days. When a house was built it was built with "green lumber"- fresh cut wood... prone to shrinkage, in some cases a lot of shrinkage. That's where how the wood is actually is cut comes into play, flat sawn versus quarter sawn for example. Some wood I could imagine was "seasoned"... left to dry for a time after cutting to reduce the moisture content of the material. Even this did not eliminate shrinkage. So to answer one of your questions, I think the floor squeaked early on after the house was built. As soon as a wood or coal stove was fired up to heat a home in the wintertime, everything really dried out and that is when the squeaks would start.

To answer another question the name of the wood is "heart pine" as in out of the center of the log with no sap wood, and is quarter sawn for durability and stability in many cases.

Back at fixing your squeaks. I have done this type of fix over a large area of floor many years ago for a client. The floor was directly set to the joists, and I hand nailed all the loose flooring reducing squeaks. I think If you did this on a small section of floor just to give a test area, to see if you like the results before you go over the whole area. The mention using trim head screws is a great idea, it will leave a slightly larger hole to fill but a well matched putty can make any nail hole disappear. My suggestion to minimize the size of the holes is this, work a small drop of water into the freshly countersunk fastener and let the water swell the wood back up around the fastener head. This will reduce the size of the hole to a noticeable degree. This is whether it be holes left by trim head screws or hand driven finish nails.

Considering the work and expense involved in replacement, I'd be looking hard at trying anything possible for squeak remediation. What comes to mind is injecting epoxy (or perhaps something else?) to bind the boards together so they stop rubbing and making noise. Perhaps trial in one area to see if you can get a workable squeak solution.

Those are beautiful floors. And the boards are probably nice and strong. If you do pull the boards up, what about putting them right back down, but with construction adhesive such as Liquid Nails? That placed between joist and board as well as on the edges of the boards should significantly reduce the movement.

Another possibility while the boards are up is giving some of the joists a "sister" so that individual joists flex less.

Not the answer you're looking for? Browse other questions tagged flooring hardwood-floor subfloor hardwood-refinishing or ask your own question.

1
How to Fix an Unlevel Floor on an Upstairs Floor in Preparation for Nail-Down Hardwood Flooring?
1
How to resolve subfloor squeaking when screwing does not fix the problem?
0
determining floor type for dealing with squeaks
2
Hardwood Flooring Direction on Older Subfloor
1
Smoothing OSB subfloor after hardwood and glue removal
1
Subfloor and Batten Construction of 1950s Hardwood Floor
1
Hardwood Floor Squeaks - Fixing Squeaks or Removal of Hardwood Floor for LVP
4
How can I tell how my hardwood floor is attached to my joists below, if there is no subfloor and no visible nails?
1
How to support subfloor because of gap between floor and joist