How to support subfloor because of gap between floor and joist

There is a beam that runs down the center of our house (in the basement). Floor joists are hung on both sides of this beam. On one side of the beam there are gaps between the subfloor and joists (see pic below), but the joists are all level. The max gap is about 3/8". I don't know if it matters, but the joists are not sitting directly on the hangars either (there's a slight gap, see second pic). This gap has led to the subfloor saging and squeaking when people walk on it. I'm concerned that this will lead to damage to the subfloor or the hardwood floor that's on top of it.

How can I fill in this gap and support the subfloor? My first thought was to put shims in there, but I don't know if there's a bigger problem here. If shims are good enough, then I assume I'll have to fill in the entire gap (i.e., just putting 1 in at the beam will not suffice). 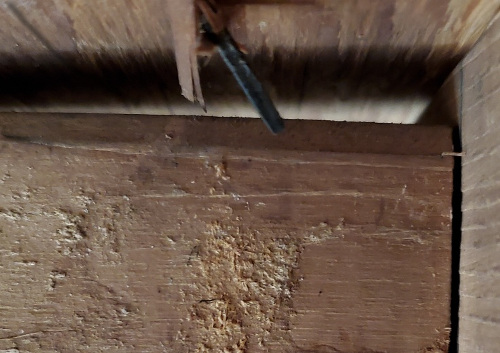 You're right that you should use a shim, but wrong about the location. You should shim under the joist, in the hanger.

Shimming on top would just support a dished floor, which isn't ideal. By bringing the joist up where it belongs you end up with a flat, fully supported floor.

Use whatever jack you have around and a stout post* to lift the end of each joist just outside the hanger until it's slightly above flush with the top of the beam (to allow for a bit of settling when you let down). Then measure the gap and cut a shim. It can be longer than needed so you can pound it in place, but it should be 1½" wide. Some construction adhesive on all points of contact will lock it in place, along with the friction from weight.

If there are nails through the hanger into the joist, you may need to temporarily remove them. If you're doing that, you could also just raise the hangers, and not bother with shims. Do whatever seems easier, operating on just one at a time to reduce risk of movement above.

* A pair of 2x4 boards in a T configuration, connected with screws or nails every foot or so, would do. You could also use a 4x4 or larger timber, or a large steel pipe. Put a block on top to protect the joist from damage.

Not the answer you're looking for? Browse other questions tagged joists subfloor or ask your own question.

7
How do I measure joist deflection?
2
Support for Tile floor
0
How can I even out my subfloor?
0
maximum ceiling joist to beam span without joist hangers
1
Floor sagging between joist- please help
1
Subfloor and Batten Construction of 1950s Hardwood Floor
4
How can I tell how my hardwood floor is attached to my joists below, if there is no subfloor and no visible nails?
1
Can I screw through wood floor and plank subfloor to joists to prepare surface for tile?