I just want to confirm I have my wiring down correctly. I live in the US (upstate NY) which is under NEC regulation; no local code regulations added on top of NEC.

I am installing a new outlet (120V/20A duplex) in my basement (exposed, block foundation walls). I am running 12/2 Romex out of my service panel, stapling the Romex to the floor joists (the ceiling of my basement) until I get to the area on the wall directly above where the outlet will be. From there I will run the Romex into a junction box. Inside the junction box I will strip off the outer Romex, exposing the 3 THHN wires inside of it (hot, neutral and ground).

The hot and neutral wires will not be perturbed at all and will be sent down a PVC conduit all the way to the junction box housing the outlet, where they will be attached to the outlet. 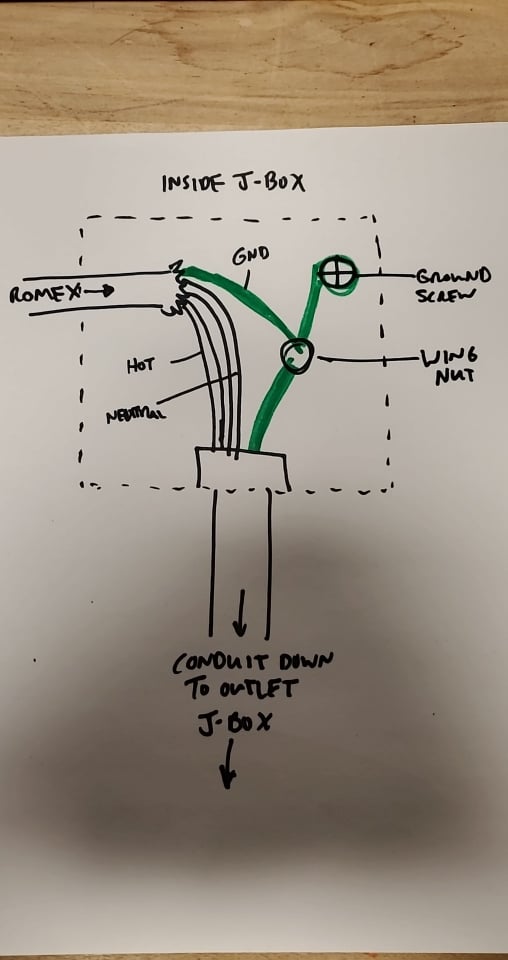 I believe this is the correct way to go so that:

Can someone spot if I'm doing anything wrong here? I understand there may be other ways to do this, but this is the solution I've chosen and I just want to make sure what I'm doing is safe, to code and is correct (in terms of achieving proper grounding). Thanks in advance.

The UL specification for NM cable does not require the wires to be THHN, or marked with their insulation type for that matter. As a result, you can't just "shuck" a NM cable and stuff its wires down a conduit as you propose. Instead, you'll need to splice the NM cable hot and neutral to THHN in the interior junction box. Your grounding plan, though, is sound.

Forget the box on top. Dive straight down the pipe, sheath and all.

You are stuck in a place of confusion. There are two totally separate things and I'd like to describe them separately.

1. Conduit as a wiring method.

This is where conduit is run *the entire run from wherever to wherever. Conduit is continuous except for pulling points such as LB's, there are junction boxes or panels on the end and often in the middle. As many branches as desired.

Inside that wiring method, individual actual THHN wires are used. They are marked and legal colors (no re-marking white to be a hot, for instance). The THHN wires are run end-to-end. All the rules apply: conduit fill at 40%, derates, whole nine yards.

2. Any darn thing as a damage shield

In this, Romex/NM is actually the wiring method. It's just plain old Romex whenever it isn't in a junction box.

However, the Romex has to transit a small area where it would be vulnerable to damage. To stop that damage, any old thing is stuck in front of it to protect it. It could be a 2x4 with a notch routed in it. It could be some sheet metal bent into a _/\_ shape on a metal brake. It could be a chunk of old copper water pipe. And it happens to be a stick of EMT or Schedule 80 PVC conduit that somebody had lying around.

Because schedule 40 PVC is not legal to use as a damage shield.

And then, suddenly people think this has ANYTHING to do with the conduit wiring method. It does not.

And they think they have to give even the slightest credence to the conduit wiring method rules. They do not.

And then people get confused about what the conduit rules even are. Romex-in-sheath is perfectly allowed even in the conduit wiring method. Masochistic compared to wonderful stranded THHN, but allowed.

Plan #1: Forget box on top. Take Romex in sheath down the water pipe.

The top is just sheathed Romex diving down the pipe. Down in the outlet junction box, you have either a proper conduit fitting (advantage: conduit), or a Romex cable clamp (if protection is a split drain pipe or a grouted stone cairn).

The sheath comes all the way into the box by at least 1/4" (more is allowed). The wires extend at least 6" beyond end of sheath (condemning lower limit, more is better but <12"). Finish as usual.

Plan #2: Transition to real THHN at the top box

ThreePhaseEel covers the issue here. With an approved EMT metal conduit (not a stone cairn), you can use the conduit as the ground path if you ground to the top metal box. Regardless, terminate the Romex at the top box and run actual marked THHN wire down the pipe.

The secret to this plan is learning to stop shopping at big-box stores and find a place that sells by-the-foot. Box stores don't - many only sell spools, and their small spools are criminally overpriced. Try hardware stores or lumberyards. 6' of THHN is under $2 at the very, very boutiquey hardware store a block away from me.

In this case you are actually transitioning to the conduit wiring method and you must follow those rules. So no more than 40% conduit fill!

Grounding concept is fine, but not required if you don't splice the wires running through the box.

But before you even get to the j-box I'm concerned about stapling to the bottom of the joist:

NEC 334.15 Exposed Work (C) In Unfinished Basements and Crawl Spaces. Where cable is run at angles with joists in unfinished basements and crawl spaces, it shall be permissible to secure cables not smaller than two 6 AWG or three 8 AWG conductors directly to the lower edges of the joists. Smaller cables shall be run either through bored holes in joists or on running boards. Nonmetallic-sheathed cable installed on the wall of an unfinished basement shall be permitted to be installed in a listed conduit or tubing or shall be protected in accordance with 300.4. Conduit or tubing shall be provided with a suitable insulating bushing or adapter at the point the cable enters the raceway. The sheath of the nonmetallic-sheathed cable shall extend through the conduit or tubing and into the outlet or device box not less than 6 mm (1∕4 in.). The cable shall be secured within 300 mm (12 in.) of the point where the cable enters the conduit or tubing. Metal conduit, tubing, and metal outlet boxes shall be connected to an equipment grounding conductor complying with the provisions of 250.86 and 250.148.

Normally you are not allowed to run the conductors from NM cable without the sheath because the individual conductors don't have the marking required in 310.8. They may be THHN-2, but they aren't marked with all the data required to be installed as such.

You can run one 12/2 NM-B cable down the 1/2" conduit if Listed for protection from physical damage (if PVC that means Sch 80), two will not legally fit. You may want to use THWN conductors down the pipe to allow the possibility of extending the circuit by splicing in the junction box at the ceiling.

Also be aware that the current 2020 NEC in 210.8 requires Ground Fault protection of receptacles in basements.

Not the answer you're looking for? Browse other questions tagged electrical wiring grounding junction-box or ask your own question.

15
Do all wires on basement walls have to be in conduit?

0
Grounding short section of metallic conduit or raceway used solely for protecting NM from physical damage without junction?
1
Electrical wiring/grounding - continuity via metal junction box?
3
Attaching a grounding pigtail to a junction without a tapped hole?
4
Ground wire from the junction box
4
Grounding chandelier in old pan junction box
3
Replacing grounded outlets with grounded metal junction box
1
Grounding a ceiling fan with FMT conduit present
2
Choosing THHN colors when running 2 circuits together
6
Is it wrong to run ground wires all the way through conduit to each junction box?
2
Junction or pull box