I have this PVC piping: 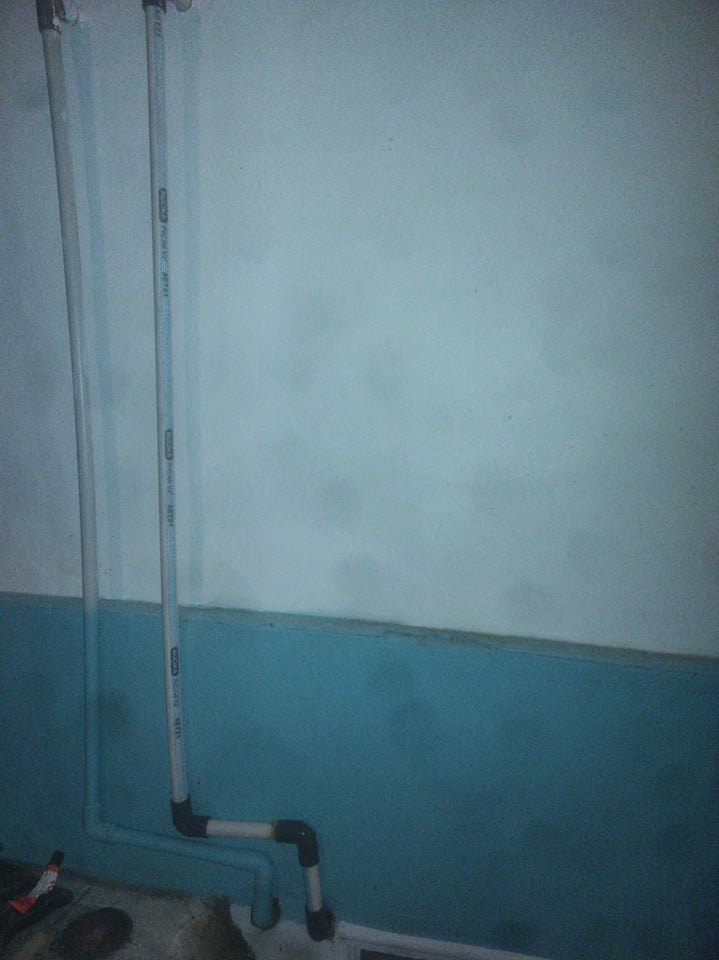 It comes out the basement wall, up the exterior wall, and then back through the bathroom wall.

One pipe is carrying hot water, and it's leaking so I want to change for more suitable piping, which appears to be PEX (PPR is available, but the jointing tool looks to be very expensive).

PVC is rigid and uses cheap plastic elbows. PEX is flexible, and while it seems like I can reasonably bend it to achieve the move to the left of a few inches, I'm not sure if the right angles through the wall are best done using elbows such as this one: 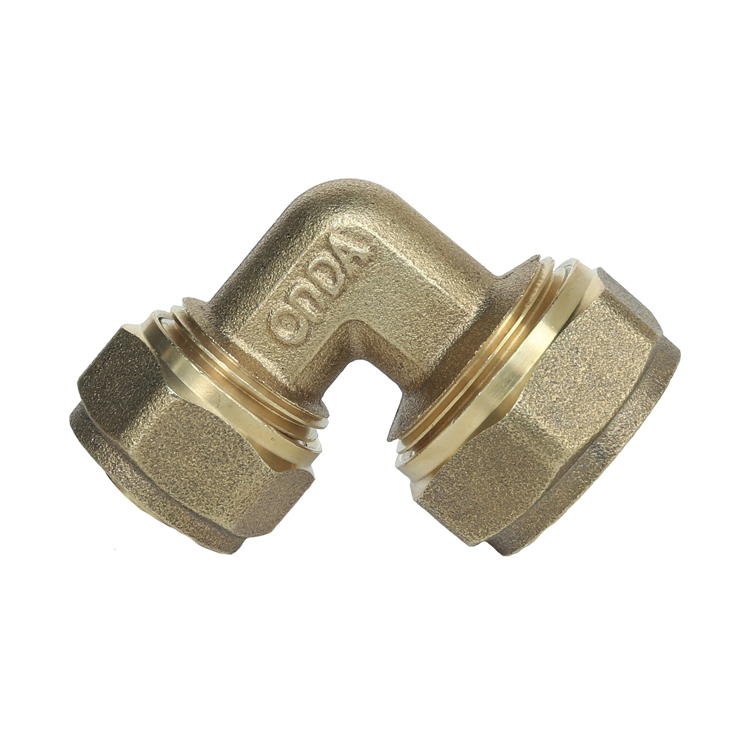 or I can just bend it.

Obviously you cannot bend hose at a right angle, so it would need a bend radius each time it goes through the wall. I'm not sure exactly the pressure of the hot water - it's coming in at 1.5 bar, but I assume the (instant, gas, 5 l/m rated) heater is causing a big loss of pressure.

Is there advice about what's the best solution? (The fittings are brass and much more expensive than the PVC ones, but I suppose buying three of them is not the end of the world, it just seems wasteful.)

I'm in the latter camp - fewer fittings, fewer places to fail, fewer flow restrictions. Your offset is very minor and easily done within the natural bend of the tubing. Minimum bending radius should be specified by your tubing maker, typically either 6 or 8 times the tubing outer diameter. Your offset won't even get close to that, if done over the space available.

The two lower elbows are therefore redundant. If the turn at the top of the picture is going straight into the face of the wall, that's a good place to use an elbow. If the wall construction is amenable you could possibly cut a radiused slot for the tubing to bend through, but given you already have holes, easier to use them and a fitting.

The larger concern I have with your installation is that neither PVC nor PEX should be run exposed to sunlight, which "up the exterior wall" contradicts. So you should build a pipe chase (hollow box, easily removed when needed) to protect them from sunlight and other causes of damage outside.

When coming out of the wall or through a stud to bend up/down etc.. you'll rightfully need a right-angle elbow.

When "jogging" the line over an inch over several feet of length you don't need an elbow and bending it is just fine.

Where permissible you could choose to drill your through-holes under a slight angle in the general direction of the pipe; not every hole has to have an axis perpendicular to the surface it perforates.

Avoiding fittings has the benefits of

Although a 6in (!) radius is permitted for 1/2in pex, I'd go for much more to avoid flow restrictions and tension on the anchors. 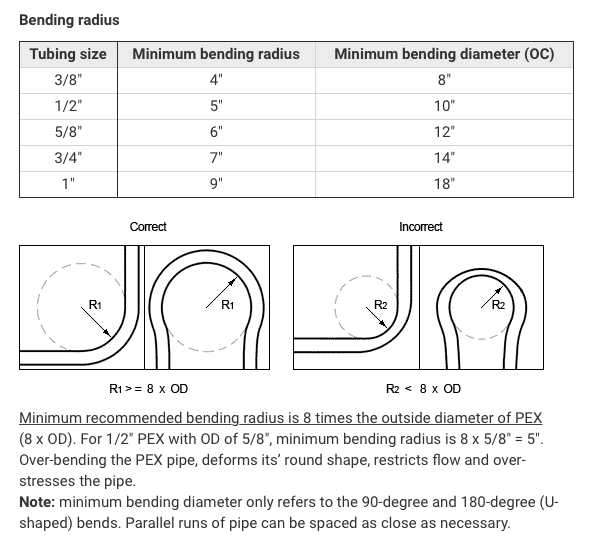 PEX can naturally have a bend to it. If you’re using a long enough piece from a spool of PEX and the natural bend is all you need in terms of radius, then I’ve certainly seen that done by plumbers.

However a nicer job with a more precise fit would have you using fittings to run the pipe exactly where you need it.

What you cannot and should not do is bend it past it’s natural curve off a spool, nor should you put too much strain on the fittings at either end of the bent piece. If I were you, I would always use the proper fittings.

I have replaced the piping and will add my thoughts.

Firstly I thought I was buying 'PEX' but it turns out there are many types of PEX.

I bought what was PEX-AL-PEX, which cost me around $1.30/metre locally. This piping is very nice because it contains aluminium, which I did realize at the time, but what I wasn't quite cognizant of was that most PEX does NOT contain it.

Having replaced it, my other run of piping started leaking as well. This was a longer run so I ordered a slightly cheaper brand.

Without the aluminium the price was slightly cheaper, $1.05/metre, but it's a much cheaper feeling product. The aluminium means it just bends and stays bent. Without aluminium, unfortunately it only bends a bit and tends to spring back.

That means you need these : 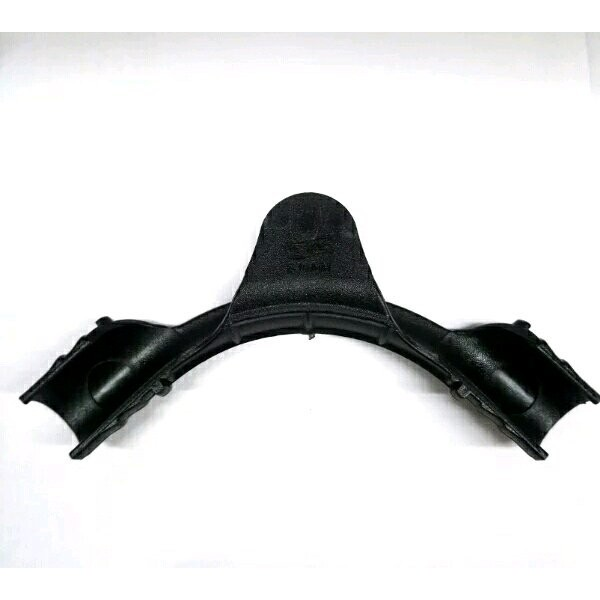 if you want to get any kind of tight bend because the bending tool holds the pipe in shape, whereas with the PEX-AL-PEX, that is not necessary, because it keeps it shape. (I did buy them with the second order, though I didn't realise they were necessary till they arrived, IYSWIM, the main purpose was supposed to be to get the 'correct' bend.)

For the second run I did not bother with any elbows, just using the bending tool, and I feel it's probably just best to eliminate them as much as possible as it's a source of leaks and extra expense and doesn't really seem to add a lot in that with the aluminium the pipe just bends where you want it to go and stays there.

For the second run it would have been cheaper to just use PEX-AL-PEX and skip the bending tools, but there we are....

Not the answer you're looking for? Browse other questions tagged pex or ask your own question.

3
Is it a problem that PEX emerging from the walls is floppy
4
1" pex through 3" pvc conduit?
1
Sleeve for below grade pipe penetration
3
Pex bend supports keep breaking
0
Well Pump Setup: Best Materials to Use for Pipes
2
Threading cable through existing pex-like tubing
1
Burying PEX Pipe in the ground
2
How to protect PEX pipes from puncture