I need to fix these eyesores on my walls. I think the wall has been painted with wood paint, and wall plugs (anchors) have been mudded and painted over. Any advice for how to fix this? Thanks! 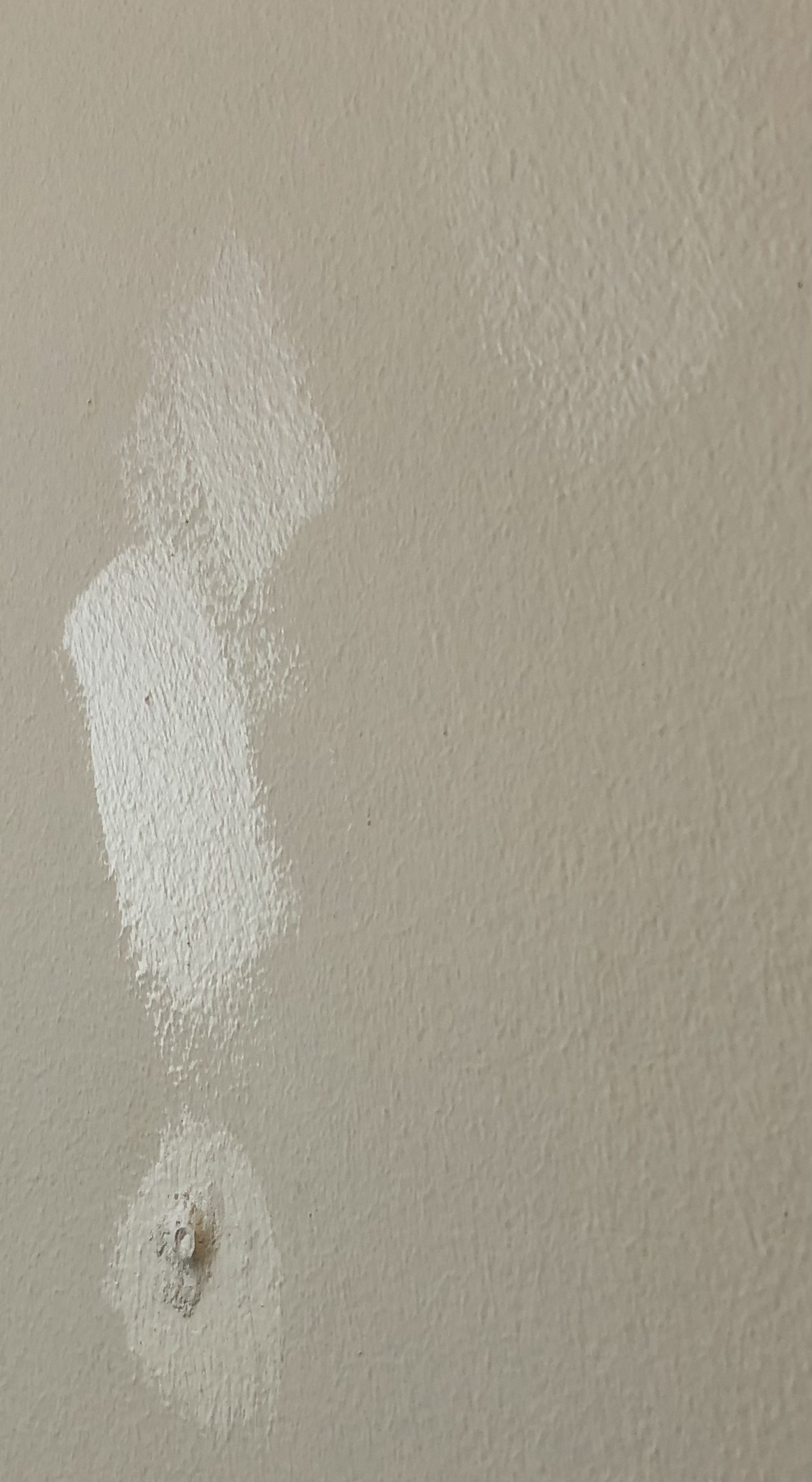 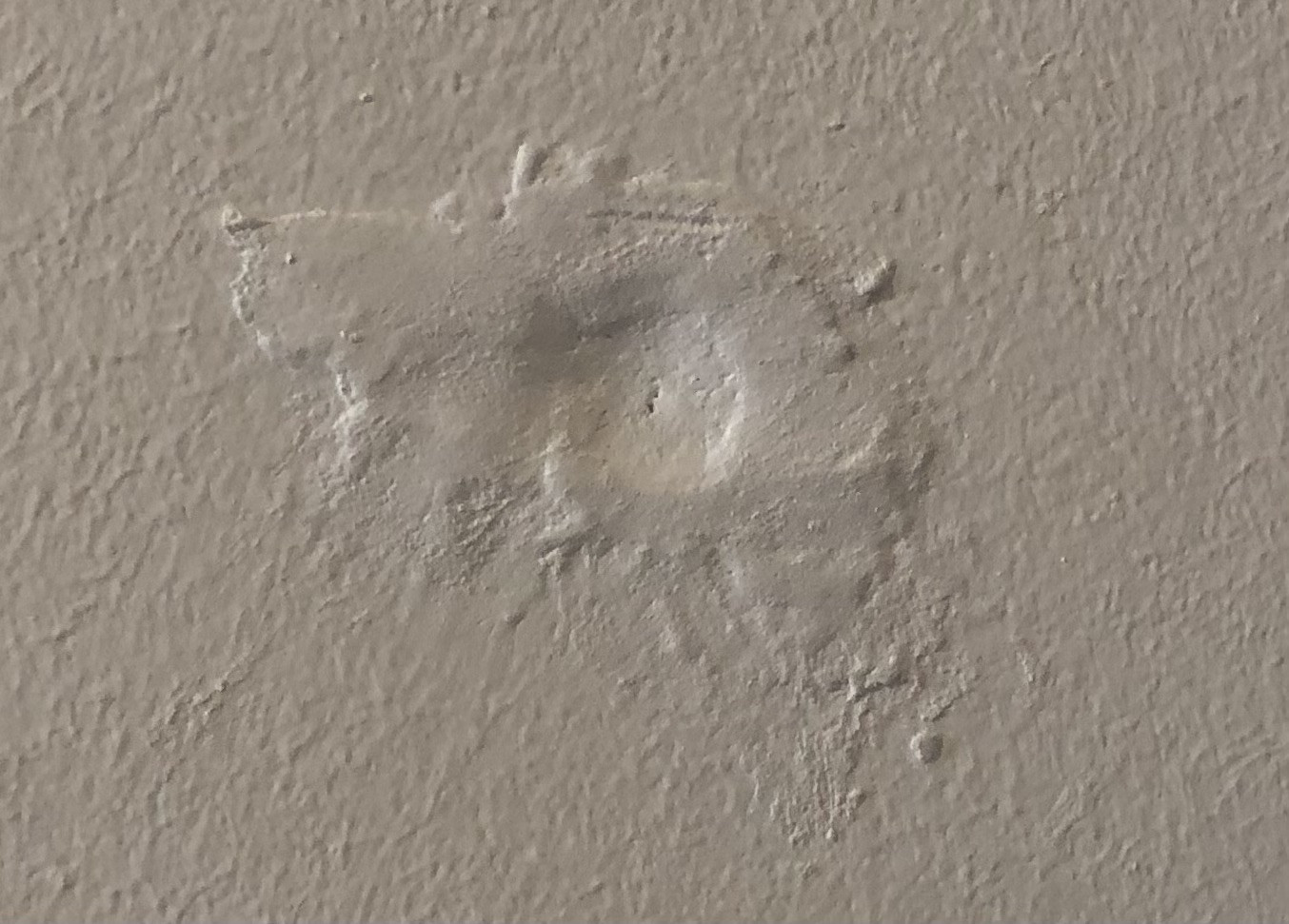 It appears to me that the touch-up paint color doesn't match the original color very well. Either new, better matching paint will be necessary to cover the touch-up spots again, or repaint the entire wall. It also appears that the texture of the main wall was created by using a roller to paint the entire wall at once and the mismatched texture in the touch-up and patched areas is because they were painted with a brush. When you repaint, use a roller to replicate the general pattern from the rest of the wall for the best blending.

As to the bulge and dip, yes, I'd agree that those look like wall anchors that were very poorly mudded over.

For the one that sticks out:

For the one that's recessed:

Once the bumps are repaired, clean the surfaces well to ensure there's no dust, and use some more of that touch up paint to hide your handiwork.

Assuming re-finishing the entire wall is right out of the question, except for a new coat of emulsion...
This might be easier if that's anaglypta on the walls rather than textured paint, but the 'fix' is about the same either way.

Use a cheap chisel or sharp wallpaper scraper to get the worst of the over-filled patches off, taking the paper or paint off for a couple of inches around each hole, let the edges tear raggedly - it hides better later.
Use pliers or whatever will fit to rip out the rawlplugs.
Fill with Polyfilla, smooth to the plasterwork.
Tear a bit of anaglypta by hand so it has feathered edges & glue into the gap.
Finish with matt paint, which will hide the joins far better than eggshell. If you're trying to match to a surface that's had 17 layers of paint since it was last papered, over-layer the new patch several times until it starts to better resemble the old finish.

This is the edge of an anaglypta patch I managed to find, lit from the side so it stands out a bit more… 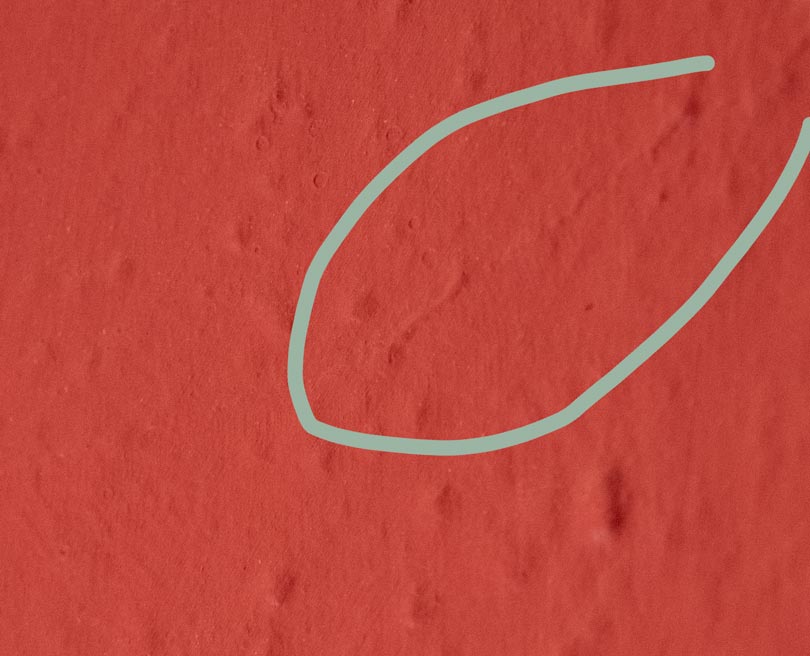 I would also agree it looks like badly installed drywall anchors or perhaps in the case of the one sticking out even a stripped screw that whomever worked on this before had trouble removing was left in an old hardens stud making it even more of a challenge to remove that usual. In any case I would either remove the object sticking out entirely by either pulling it straight out with a claw hammer but be sure to put a small piece of 1/2 plywood behind the hammer so it doesn't cause further damage to the surface of the drywall. Then using very coarse sandpaper remove any paint, mud, or other material that is above the desired finish surface and apply a couple light coats of mud as it shrinks and to hide the flaws it will require more than one application. Sanding between coats is likely necessary to ensure a good finish. Once the surface is smoothed to your satisfaction you'll need to apply a coat of primer/sealer to the patched area to prevent it from "flashing" that is it will be abundantly noticable when bright light is reflected from the surface, this is undesirable so it's very important not to skip this step. A final sanding finish with 120 grit sandpaper will be quite sufficient to provide a nice smooth finish and I also recommend lightly sanding after the primer/sealer has fully dried before the finishing coat is applied. It's also very important to remove all dust before you apply paint or it will make the job look less than ideal on a good day, lol. Also the best way to apply paint to a wall is with a roller and for the most desirable results painting the entire wall will always provide better results than touching up a spot unless the was was painted very recently and you still have some of the same paint available. That being said after the primer/sealer has dried and been lightly sanded, wipe down the entire wall with a lightly dampened cloth to remove any dust on the wall, paint the area of the repair and allow it to dry before painting the rest of the wall and wheb you do paint it all in one single step so the finish is both uniform and consistent from top to bottom and sides to side. And remember when patching a blemish on drywall spread out the area to feather out the flaws unlike with an automobile when you repair a dent you have to make it exactly the same as it was prior to the damage and any flaws must be eliminated vs feathered out! I hope that helps...

Not the answer you're looking for? Browse other questions tagged walls anchor or ask your own question.

6
How can I remove old paint from plaster walls?
0
What type of screws and rawl plugs should I use?
6
Will wall anchors work when screwed into a stud?
2
Attach net/hammock to interior walls
2
Paint peeling off layer of joint compound over plaster, am I in over my head?
2
Is it possible to recover pencil marks on a wall that has been painted over multiple times?
0
Anchors for concrete - what to use on a concrete ceiling?
1
What type of wall mount is this (composed of spring, metal piece, and screw)?
0
The right anchors for our walls