How do I keep the lights on permanently?

My upstairs hallway gets rather dark as it has no windows. It is also at the top of a set of stairs, which too has no light source.

To ameliorate this, I have recently installed LED light fittings. I would like to remove the light switches to ensure that these lights remain on permanently, as,

Currently, the switches that control these lights are as follows;

The power to the switches should be in a single drop from the main circuit that runs through the ceiling. That means you can simply short the permanent live in the rose & disconnect all the switches from the entire circuit in one go.

You have to be absolutely certain this is the case before you start. Rarely in the UK, mains power may go to the switch first. It's unusual but not impossible.

Note, in UK terminology you currently have two '2-way' switches and one 'intermediate' switch.

This is the standard way to wire lighting in the UK - using an image from LightWiring UK
Just to be clear, none of the switches in the original illustration are 2-way - I've roughly drawn a couple in, shown surrounded in a blue dotted line, just to indicate how they are all linked from one single drop, even if the switches are on different floors. 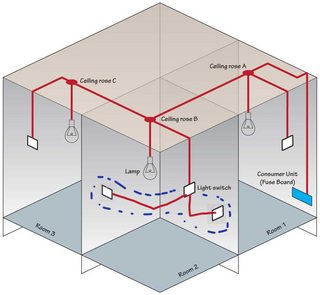 Using the diagram from http://www.lightwiring.co.uk/three-way-light-switching-old-cable-colours/attachment/intermediate-switch-wiring-diagram-old-colours/ as a guide… [sorry, I used the old colour Red/Black Green illustration rather than Brown/Blue/Green-yellow]

Detach all the wires to the first drop, marked with blue below. Safely cap with terminal block. Leave in-situ & label for future re-connection as
'Removed drop to switches in [locations]. CONNECT LAST'.
This leaves your entire switching circuit dead & disconnected. You can now remove all your other switches & cover the boxes. However, it would be very nice for future owners of the house if you safely terminate the wires & cables in each box & leave a note inside each explaining the situation & how to restore it. Labelling each wire with its terminal name would also win you support from a later reinstaller.

Loop the Live from the main feed into the normally switched Live down to the lamp itself.
Done. 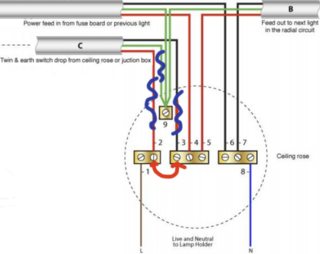 In increasing order of difficulty:

The LEDs themselves do have a long life, but their drivers to work them do not.

Do not know UK rules, but most electrical boxes must be accessible, no plaster or permanently mounted stuff in front of it. Blank solid face plates would be okay.

Switches would leaved wired as they are,since three switches probably a headache to rewire right.

Can use a safety cover to protect them from being accidentally turned off.

You can buy key-operated wall switches. I think they tend to be called 'fish key' operated, due to the shape of the flat metal key / operating implement. I have one installed on my LED lighting in an otherwise dark and forbidding corridor.

The lock is not a security level lock (though you can get these as well), it's just not possible to accidentally operate.

They are compatible with the existing wall boxes, neat, not expensive, possible to operate if you need to, and easily reversible back to standard switches should you come to change your lighting configuration or sell your property.

With a lot less effort - get a nightlight. You need a socket handy, but anyway it's a little lamp you just plug into the socket and leave there. I won't post a link because they are very easy to find.

I have them all over, on staircases and in the cellar, the newer ones have motion sensors in so they are not on all the time. I see that some have the option of different colours or a disco-style light change... For kids they have them with smiley faces.

This has the advantage that you don't need to do any electrical work, and you can take them with you when you move house.

Answers using US terminology, and there may be legal differences outside the US.

You have 2 3-way switches at the ends and a 4-way switch in the middle. While you could "combine everything", that would result in parallel connections, which is not allowed. So you need to pick one traveler in each segment and join those together.

In switches 1 and 3 (3-way), connect the common wire to one of the traveler wires with a wire nut or local equivalent. Cap the other traveler. Remove the switch and put a blank plate on the box.

In switch 2 (middle = 4-way), figure out which traveler is active to each of the other switches. Connect those two wires together. Cap the other two wires.

Yes, at least in the US. The requirement is to have light. That means you have appropriate switches to turn on/off, you have a motion detector to turn on/off automatically, or the lights are simply always on. The latter two options are extremely common in commercial settings, but they can be used in residential settings as well.

No. The boxes still have wires in use, so you can't plaster over them or make them otherwise inaccessible (e.g., blocked by permanently installed cabinets). The only exception is if your circuit actually loops. That is, if the switched hot actually loops back to the first switch to power the lights then you could get rid of all the switches and connect hot to switched hot in the first box. But that is only one of a few different possible configurations. The solution I described will work for any configuration and allows the switched setup to be reconstituted later if desire.

You want to be able to turn off the light for safety should you need to replace the bulb. You might do that by using the circuit-breaker, but that will turn off all the ceiling lights on that floor.

The cheapest approach is a bit of tape over the switch "do not turn off", or put a bit of work into making a more attractive "Molly guard"

Otherwise, install a key-operated switch, and blank off the other former switches, using Wago connectors (or screw terminal blocks) to maintain the connection that was provided by the switch.

You probably don't want to burn your bridges by plastering over instead of just blanking off the other switch outlets. It may be a modification which requires an electrician (not sure) and it may reduce the value of your residence when you come to sell it (whereas with blanking plates, it's a trivial matter to reinstate the former switches before marketing the property).

2
How hard is it to replace a hollow-core door with a solid one?
1
How do I change a 1 2 light switch to a L1 L2 com light switch?

1
Hallway light with multiple switches doesn't always work
4
Four-way circuit turns on/off randomly
1
Light switch/light problem
0
Why don't LED lights turn off completely?
2
LED lights at home not turning on sometimes
2
How can I get this light fixture to light up?
2
Some lights suddenly stopped working
1
How can I make my outlet that is controlled by a light switch always be hot?