Do carriage bolts hold their position in soft wood?

I have a question about carriage bolts, and when they are appropriate to use, instead of more traditional hex head bolts. If I understand correctly, their main advantage is that they can be tightened from only one direction, the square part under the bolt head providing the resistance. With a hex bolt on the other hand, you have to use a wrench to hold the head in place while tightening (or untightening). Is this the main advantage (aesthetics aside)?

Are the carriage bolts square part able to provide that resistance in soft wood such as pine or cedar? Or should they be used mostly in hard wood? Could the square part tear through soft wood and start to spin while being tightened?

For reference, the picture below shows what I mean when I say carriage bolts vs hex head bolts. I've seen some terminology confusion on the internet. 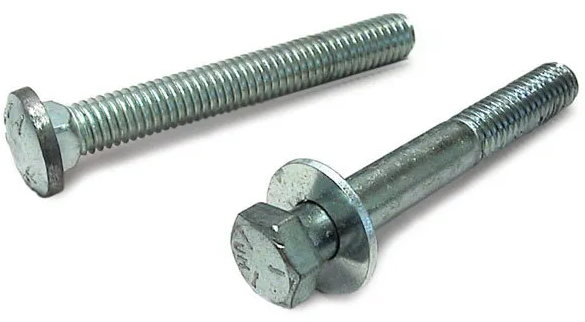 A carriage bolt head has several advantages relating to wood.

First and foremost, it's a smoother surface. That head is fairly low-profile and ramped. That makes it less likely to snag things or people.

When this is done to extremes, it is an elevator bolt, with a completely flat and slightly tapered head, designed to be pulled down to completely flush in soft wood. 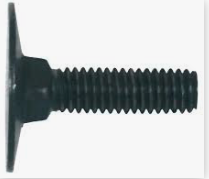 The head on a typical carriage bolt is also much wider than a hex head - this to spread the load on compressible wood. Your photo's hex bolt is oddly truncated, like someone turned it down on a lathe. That one might be intended for metal assembly.

Generally speaking, in healthy wood, "cam-out" of the square isn't a big problem. Keep in mind with softwood, torque is limited anyway due to the risk of crushing the wood. What gets carriage bolts (maddeningly) is when the wood gets weather-damaged and the bolt gets rusty - then the breakaway torque on the nut vastly exceeds the cam-out of the square.

Note that with metal, there's a generous chamfer/radius between the square cross-section and the bottom of the bolt head. If you broach a square hole in steel that is tight to the square dimension, the carriage bolt will sit proud of the steel surface, with all the force concentrated on the edge of the hole at the chamfer/radius. You have to make the dimensions a bit sloppy for that to work. In thicker plate there's not really a point, as it's easier to drill undersize and tap a screw thread right into the metal, so you use a bolt on the other side instead of a nut. Also think about how many hobbyists own taps, vs how many own broaches.

If the hole is the proper size, carriage bolts work fine in wood, both soft and hard. You'll generally crush the wood via over-tightening before you'll spin the bolt head in the wood.

A friend teaches bookmaking and makes budget book clamps from carriage bolts and ordinary SPF 2x4s. I've never seen one of those spin out. They get cranked on pretty hard.

Now, if the wood gets rotten, the threads get rusty, and you try to remove it - yes, then you'll spin the head, and end up cutting it off.

Carriage bolts can be used in sheet metal with punched square holes, like for shelving or in wood.

or various furniture fasteners that work similarly but are embedded inside the wood for a better look.

Not the answer you're looking for? Browse other questions tagged bolts fastener or ask your own question.