Update: I was able to successfully re-wire a spare wire to my Google Nest Thermostat 2020 AND reconnect power to the C-Wire of my 3rd generation Nest Learning Thermostat. Turns out the 3-amp fuse in the air handler was blown. Replacing that restored power!

Remaining question: What does a jumper wire between TH/TR and the left-hand END SWITCH for a Honeywell 5-wire zone valve do?

As requested, here is my best approximation of a wiring diagram:

As it is now (note the missing jumper wire in the zone valve for T2): 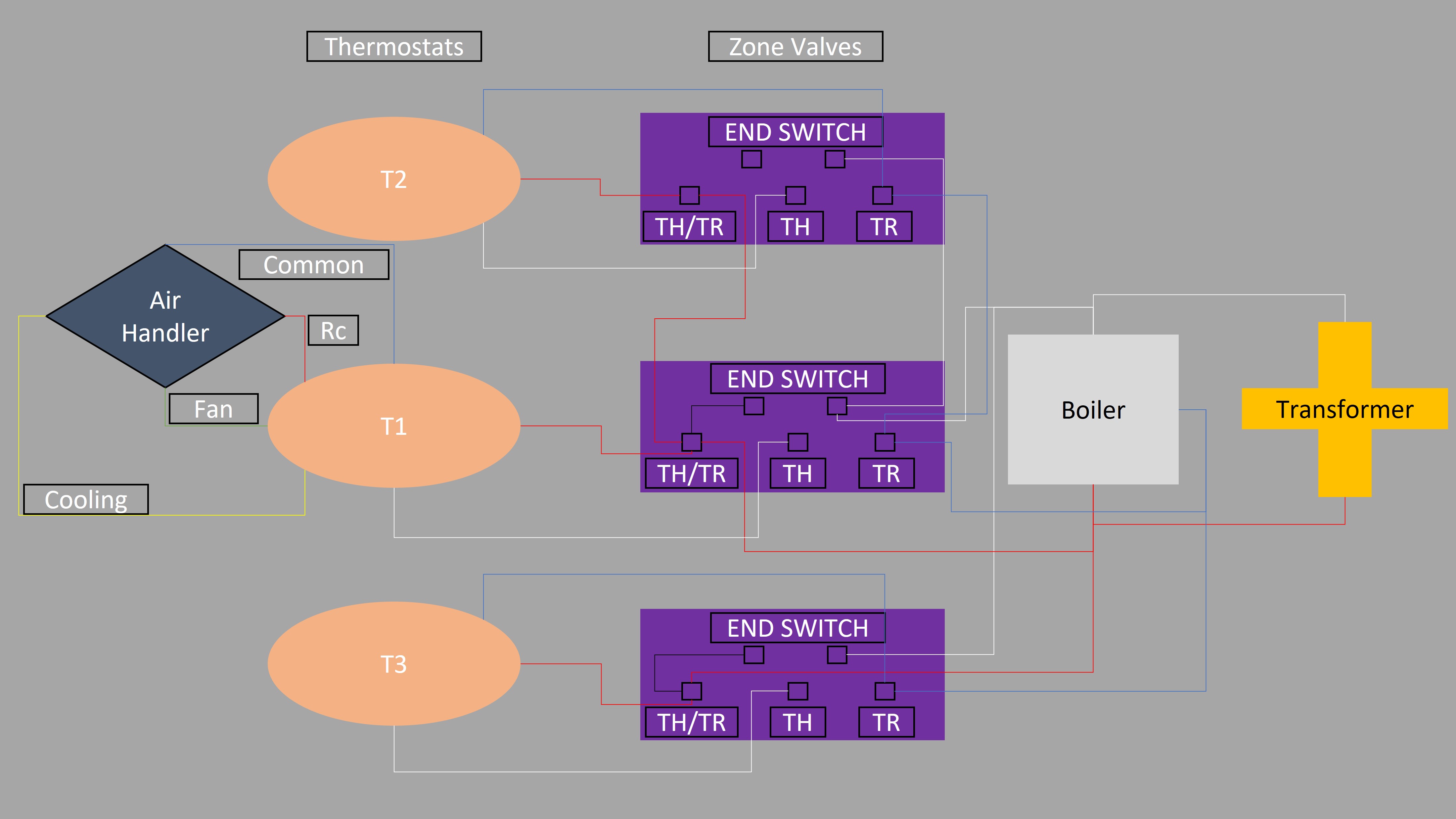 As it was before I fussed with stuff: 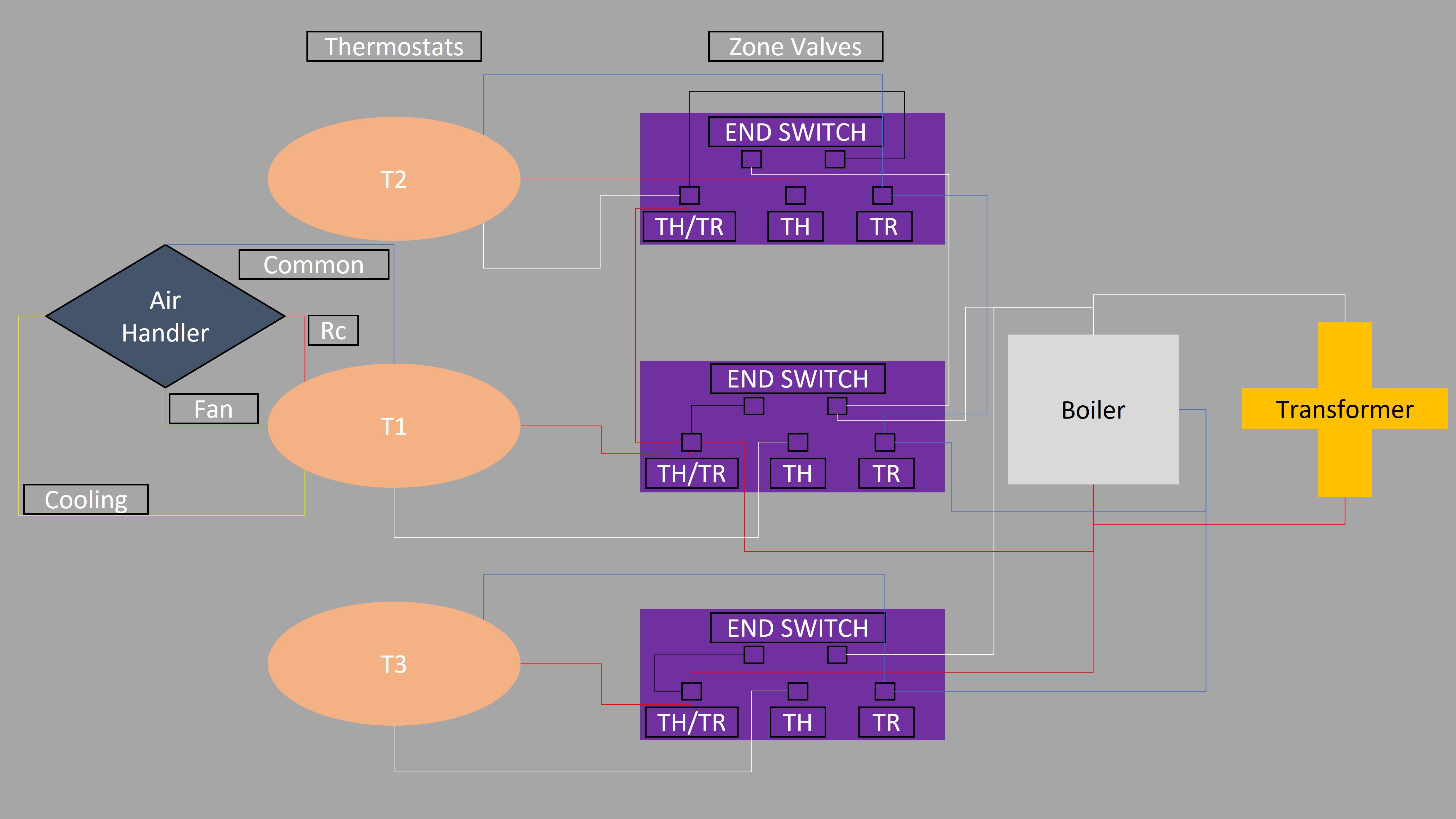 TL;DR
(1)
[a] What is the proper wiring for a Honeywell 5-wire zone valve for a heat-only thermostat?
[b] Transformer/thermostat-Red to TH/TR, thermostat-white to TH, common to TR, transformer-white to right-hand END SWITCH?

I have a 3-zone heating system in my house, with a boiler at the heart. I also have a 2-zone air conditioning system. That's not immediately pertinent, but will become important later (I think).

I'm trying to convert an available wire in one of my Google Nest Thermostat 2020's to work as a C-Wire. 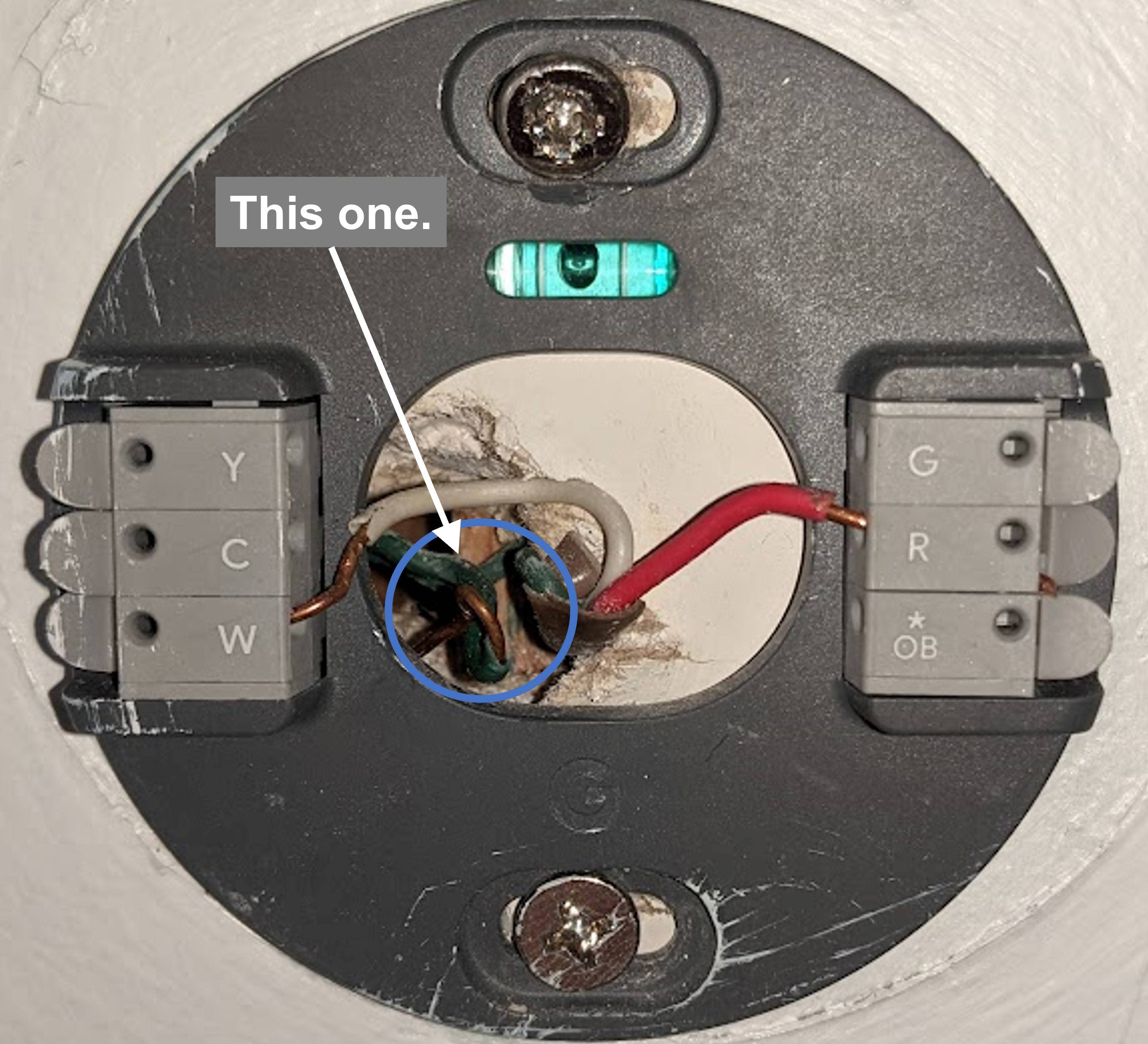 And it is controlled by a Honeywell zone valve with wiring that looks like this: 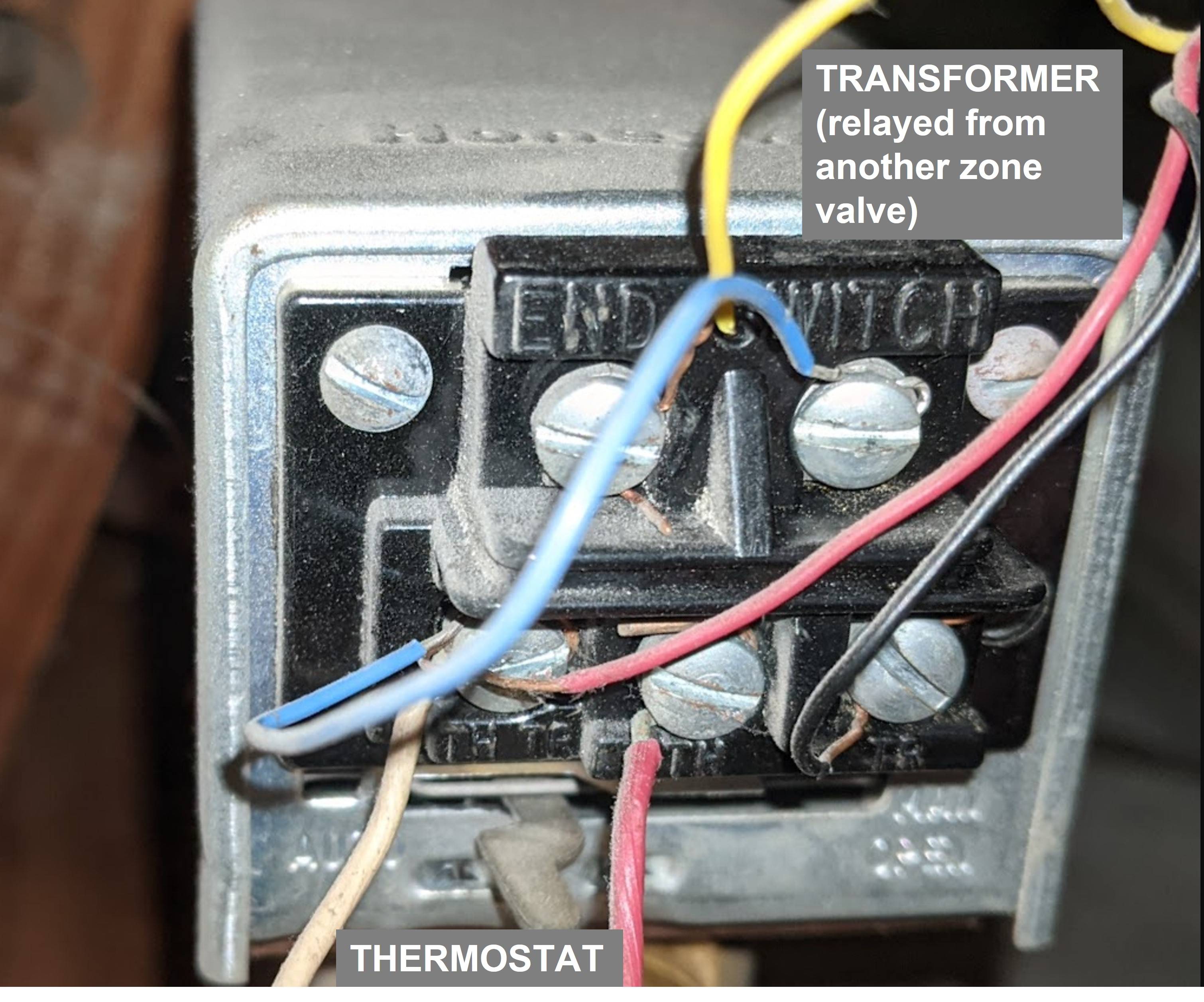 I have already converted a spare wire for another zone valve to power a second Google Nest Thermostat 2020. The wiring at the thermostat was identical to FIGURE 1, with a spare green wire. The zone valve controlling that zone looks like this (FIGURE 3), after my rewiring, with annotations based on the subsequent diagram (FIGURE 4): 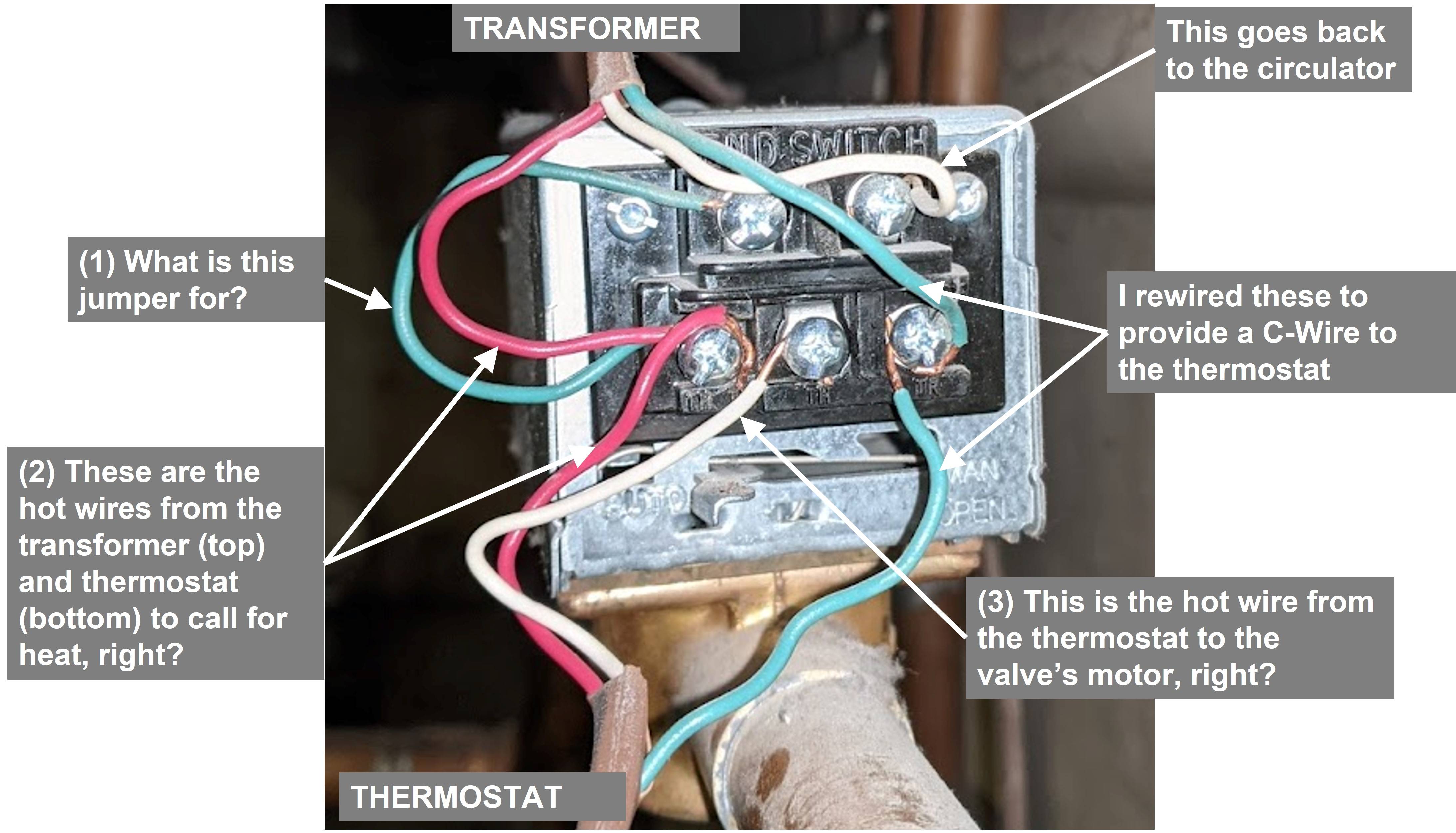 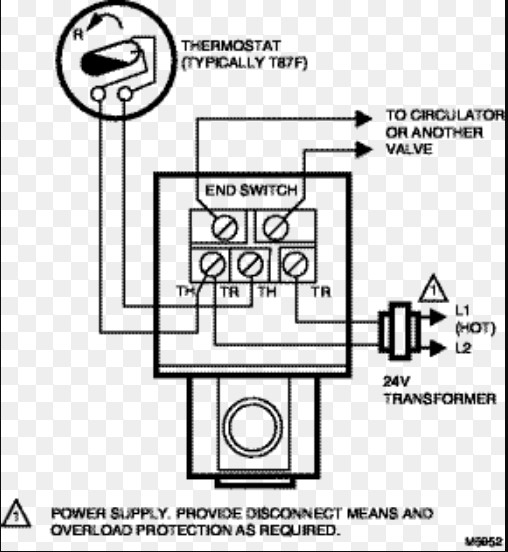 I don't want to brag, but this has been working out perfectly for the past couple of months. That could be because of my ignorance, and perhaps I'm actively deteriorating my wiring or parts in this zone and it just hasn't caused a defect in the system yet, but ignorance is bliss anyway (just kidding... that's why I'm trying to educate myself; my ignorance is dangerous!).

So, I thought, "I can repeat this process for the other thermostat!" But, of course, as is clear in FIGURE 2, there is no green wire coming from the relay or going to the thermostat at this valve. I believe, given its placement on TR, the black wire from the relay would serve as a C-Wire in this case (FIGURE 2). The problem is then, of course, where is the green wire that I can see behind the thermostat (in FIGURE 1), why is it not visible at the valve?? Found it! It was "upstream".

Beyond that, which will just involve me searching for that green wire I can see in FIGURE 1, is that the wiring in this valve (FIGURE 2) looks to be at odds with the wiring in FIGURE 3. In FIGURE 2 I've got a white wire from the thermostat going to TH/TR, which also has a red wire coming from the relay. And I've got a red wire from the thermostat going to TH. The yellow wire from the relay is going to the left-hand END SWITCH terminal, while the blue jumper wire is going to the right-hand END SWITCH.

As is evident by my questions in FIGURE 3, I do not understand the purpose of the jumper wires. But is one right and the other wrong? Or are they both irrelevant and ignored by the valve? Why does the yellow wire in FIGURE 2 go to the left-hand END SWITCH terminal, while the white wire in FIGURE 3 goes to the right-hand END SWITCH terminal? Is one right and the other wrong? Should I switch the white wire at TH/TR in FIGURE 2 to TH, and the red wire to TH/TR?

Now, behind all of this, there is a third thermostat controlling the final zone of heating in the house, with red (Rh)/white (W1) wires coming from the boiler system and red (Rc), yellow (Y - cooling), green (G - fan), blue (currently in C, but see below), orange (disconnected), black (disconnected), and white (disconnected) wires coming from the air handler for the air conditioning system (call back from the beginning!!). That thermostat has its blue wire inserted into its C port, but it reports that it is getting no power from the C-Wire. I think I have to go into the attic and look at the air handler for that one, as that is where the blue wire comes from (based on this: Separate boiler and AC, to which does C wire connect for Nest thermostat). But it is suspicious that it is also having C-Wire issues like the other two. I think this is a coincidence though, given the presence of the air handler wire bundle with a blue wire. Anyway, the zone valve for that thermostat's heat looks like this, which is where the relay coming in to FIGURE 2 comes from (note that the red/white/jumper configuration is the same as in FIGURE 3, divergent from FIGURE 2): 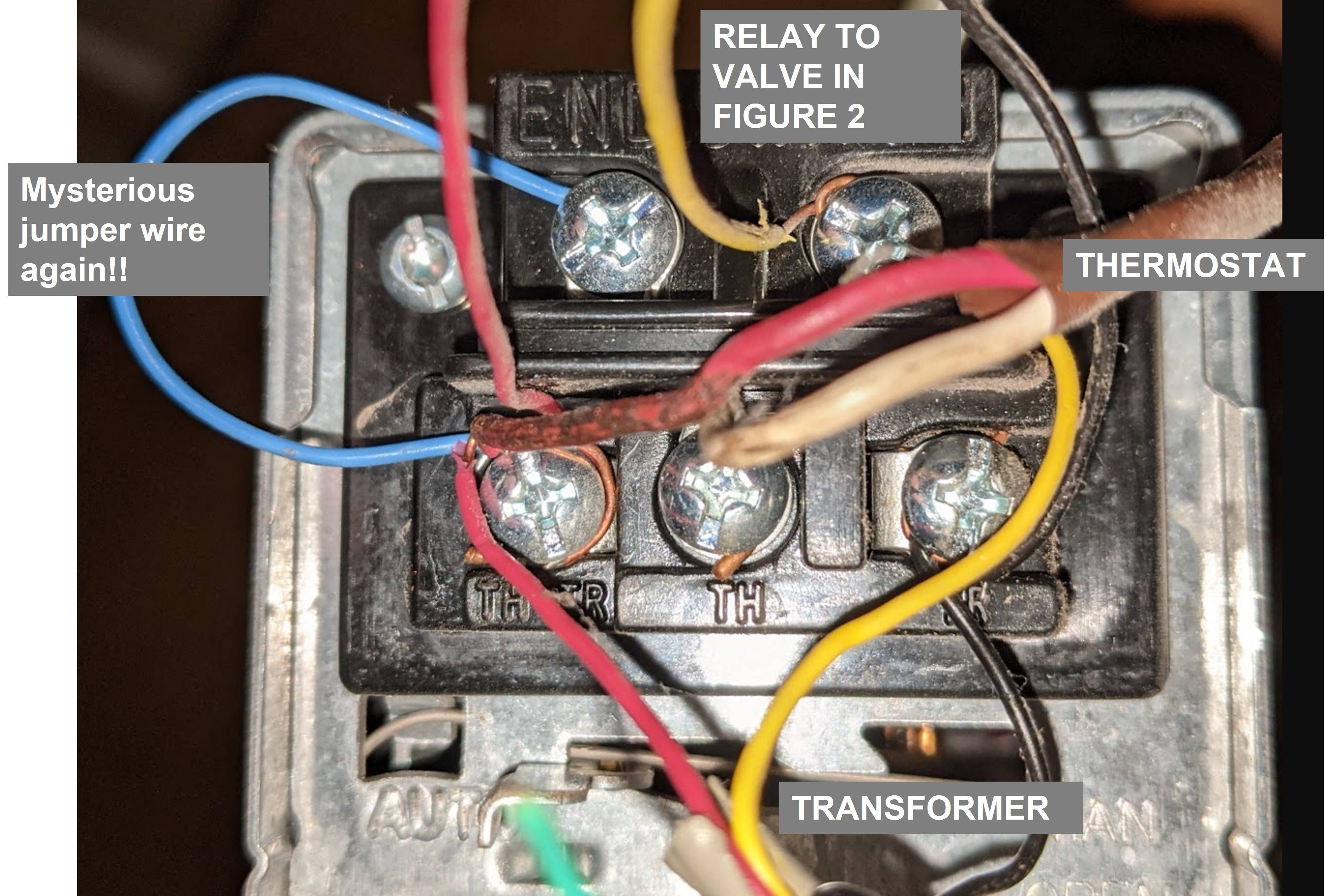 Browse other questions tagged hvac thermostat-c-wire zoned-heating or ask your own question.

1
Separate boiler and AC, to which does C wire connect for Nest thermostat

0
Installing Honeywell WiFi Thermostat
0
How do i connect a Commmon wire to Heat Controller Inc air handler?
1
How to hook up C wire to Crown air handler
2
Honeywell Zone System Wiring
0
Help me to find C wire
0
How can I install a Honeywell Wifi RTH6580WF1001 thermostat in place of a Honeywell RTH2300b?