How to ensure silicone gun products last as long as possible

Over time I have used many products that require a gun. 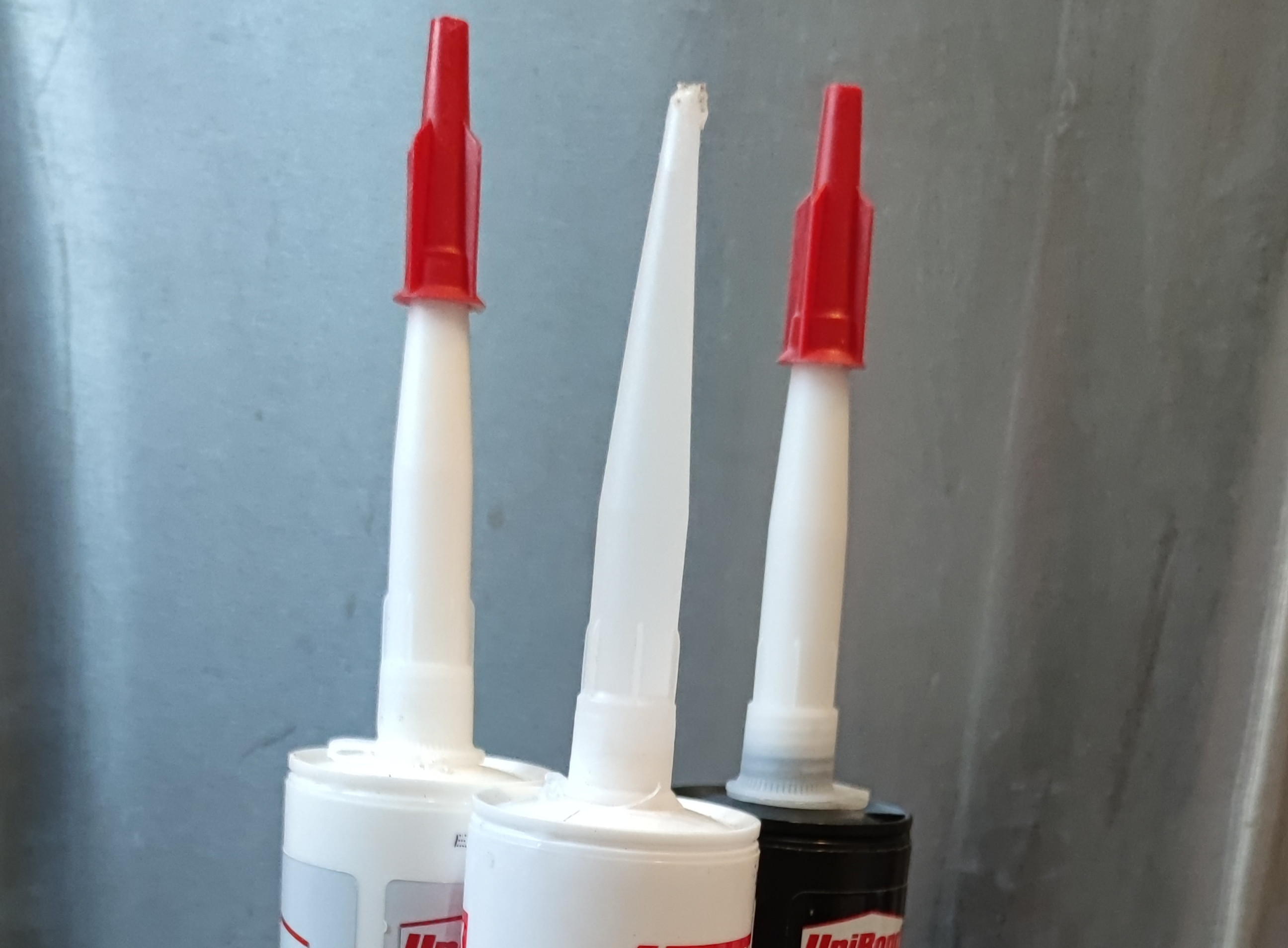 The issue I have is I do not use these often. Meaning I will buy, for example, some silicone, apply to the area and then return the tube with 95% of the silicone still inside, to a shelf where it dries up in the nozzle. As such it can not be used again.

As such I usually use one of these tubes once and bin the rest. This is dreadful for cost and environment.

Is there a way I can preserve the life of these after they are open.

You can get a slight life extension if you take the nozzle off, put a screw in it, then use a clean spare nozzle, put some cling film [US saran wrap??] over the open end & screw the new nozzle over it.

The screw will pull the hardened silicone out of the used nozzle next time you need it, so you don't overall get through as many nozzles. The cling film will slightly extend the life of the remainder in the tube. I've got a year or two out of opened tubes this way.

Something I've found that's not mentioned yet is the effect of air on adhesives.

While sealing up the tip as much as possible is certainly sound advice, I've discovered that tubes and tape last MUCH longer when bagged. After doing a number on the tip, I put caulk in a grocery bag and roll it up. This wrapping prevents fresh air from getting to the tip and around the back sliding bung, which is what dries them out. It doesn't fit perfect at all, but it also doesn't need to be water-tight. If you can reduce airflow by 99%, it will take about 100 times longer to dry out.

I also put my masking tape in ziplocs, and the rolls peel off cleanly years later.

For long term storage (more than 1 or 2 days), I remove the nozzle, put some plastic wrap/cling film across the opening and put the nozzle back on. I've been able to keep partially-used tubes for almost a year with this method. You either clean out the nozzle or put a new one on when you are ready to use it.

For just 1 or 2 days, I just wrap the plastic around the tip so I don't have to clean out the nozzle, but more than a few days and enough air still gets in to cure the product.

Here's an example, just used this tube 3 days ago and opened it originally in July 2021. Was as good as when I first opened it. 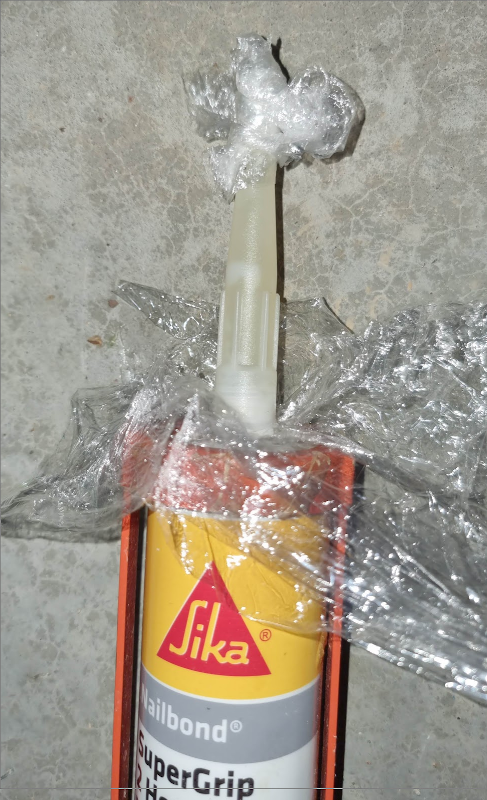 Caulk the base of the nozzle to create a perfect seal

(Do this before using it so you do not expose the unused silicone.)

I've had this stuff store for more than 2 years using this technique.

I tend to do this before loading the tube into the gun but you can do it after just the same. You don't need a lot and you can push out a little caulk with pressure from your fingers after cutting open the tube. You apply a slight amount all around the base of the nozzle and the twisting motion will spread it evenly to seal it.

If stored for less than 6 months, you may be able to just grab the hardened stuff and pull it right out in one piece. I've had mixed success, but sometimes it breaks and you'll have to push it out.

After 6 months of storage, the caulk in the nozzle will harden about half way down and you'll need to take it off and push the hardened stuff out (or you cut a much larger hole in the nozzle), but otherwise the rest of the tube is brand new.

This has the major advantage of not causing caulk to cure inside the tube because there is zero exposure. When you're done, wipe off the excess and store. 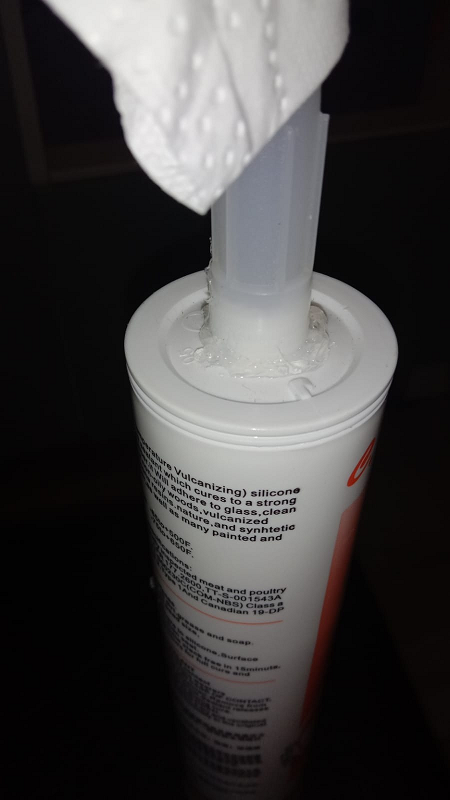 When a nozzle isn’t being used, a toothpaste cap can screw on nicely. Also bag the whole tube so it doesn’t set from the back.

The relevant science is that the silicone sets using water, but the hard silicone is still permeable to water vapour.

As a frame challenge, why are you buying these products in "bulk" when you know you aren't going to be using that much? I know it's hard to estimate many projects, but if you are only using 5% of the caulk/glue/whatever, then you should be buying smaller packages, such as a 0.5-3 fl. oz. tube with a screw on cap. Most, if not all, of the products that can be bought in a caulk gun sized tube (roughly 10 fluid ounces) can be purchased in those smaller amounts. They may cost roughly the same, but if you aren't going to be using it before it goes to waste, then the cost really isn't an issue.

And no, not all products require a caulk gun. You can get similar adhesives in those smaller tubes, even if it isn't "exactly the same thing". There are plenty of silicone glues that will work in the bath, kitchen, automotive, etc. that aren't specifically labeled for them, yet work the same or better than their larger tube counterparts.

Yes, you can extend the life of a tube with the techniques listed in other answers, but, like Solar Mike said, you'll never get an indefinite life out of the tube. I've used a couple of these techniques and no, they don't work "forever". Some tubes don't even last a year. So do yourself a favor and buy smaller tubes. You'll save yourself time, money, storage space, and hassle.

You'll also save yourself the guilt of wasting 95% of the tube when you don't need it again for +5 years and the whole thing has hardened.

You will never get an indefinite life.

But I use the caps and when I find the nozzle has solidified I put a new nozzle on. If it has hardened further then new tube required.

Also when doing jobs that need multiple tubes I reuse one nozzle, with a carefully prepared tip, across the tubes so have many spares.

There exist many kinds of relatively inexpensive reusable caps -- I prefer the ones like these: 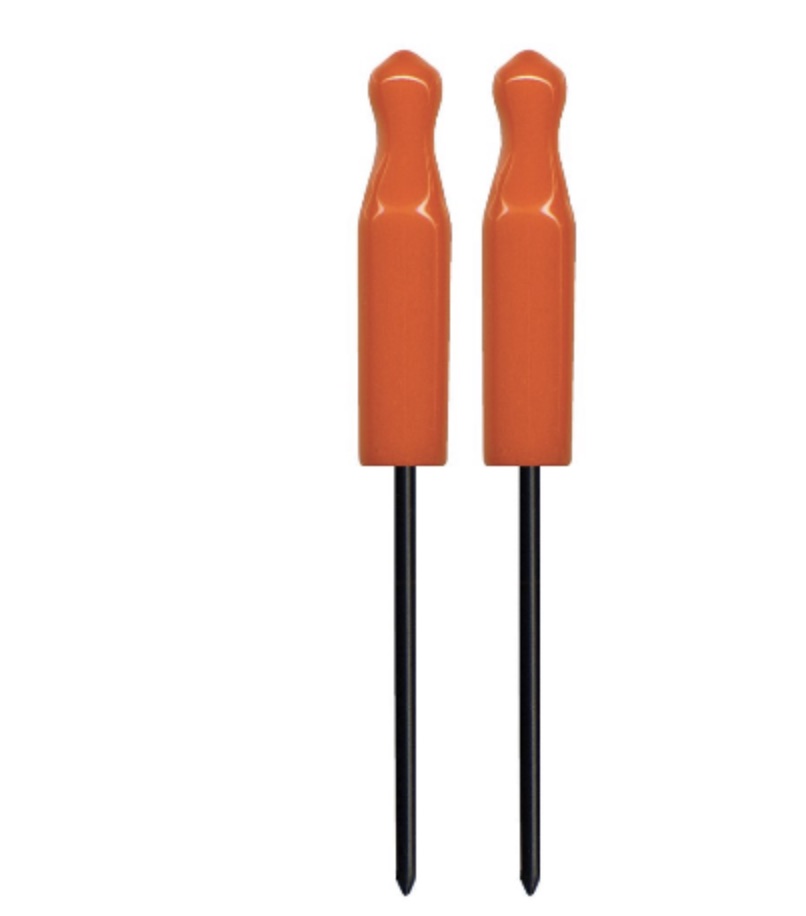 The pins ensure that the nozzle isn't blocked by the solidified caulk.

Next time you need the tube gently pull the set material out (works up to a week or three). If it's a long time, simply remove and replace the nozzle starting as above again.

One way to end up with many spare nozzles is to 'hot nozzle', i.e. if using several tubes on one job just swap the existing nozzle onto new tubes and carry on. Then you gain a spare one each time.

Dandavis above rightly noted that you also need to block drying via the back slider bung. Sniff the back of a started cartridge, it smells of vinegar. That is the acetic acid solvent escaping from that end (liquid silicone and an open nozzle will smell the same).

As an alternative to tightly bagging a cartridge, you can make an airtight seal across the rear of the cartridge with a few strips of parcel tape. Well worth having to strip this off next time you use it. 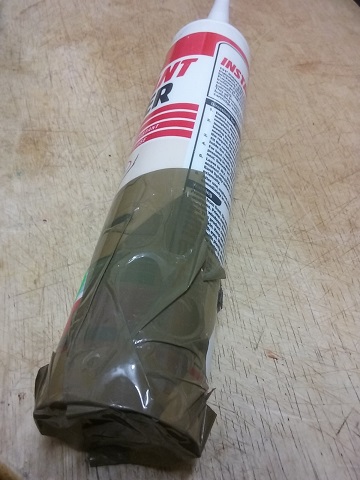 Jim RolandJim Roland
1
New contributor
Jim Roland is a new contributor to this site. Take care in asking for clarification, commenting, and answering. Check out our Code of Conduct.
Add a comment  |