If you look at my old diagram from a few months back, you'll see I had a spot for the terminal post picked out next to my house in front of a drain spout. 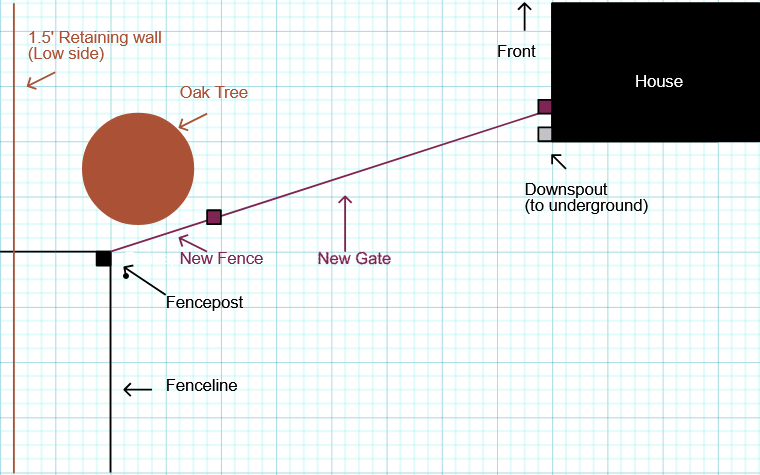 Well, after digging down about 6 inches, I came to a bit of a dead stop. There's a large immobile chunk of concrete down there, and oddly wood as well. 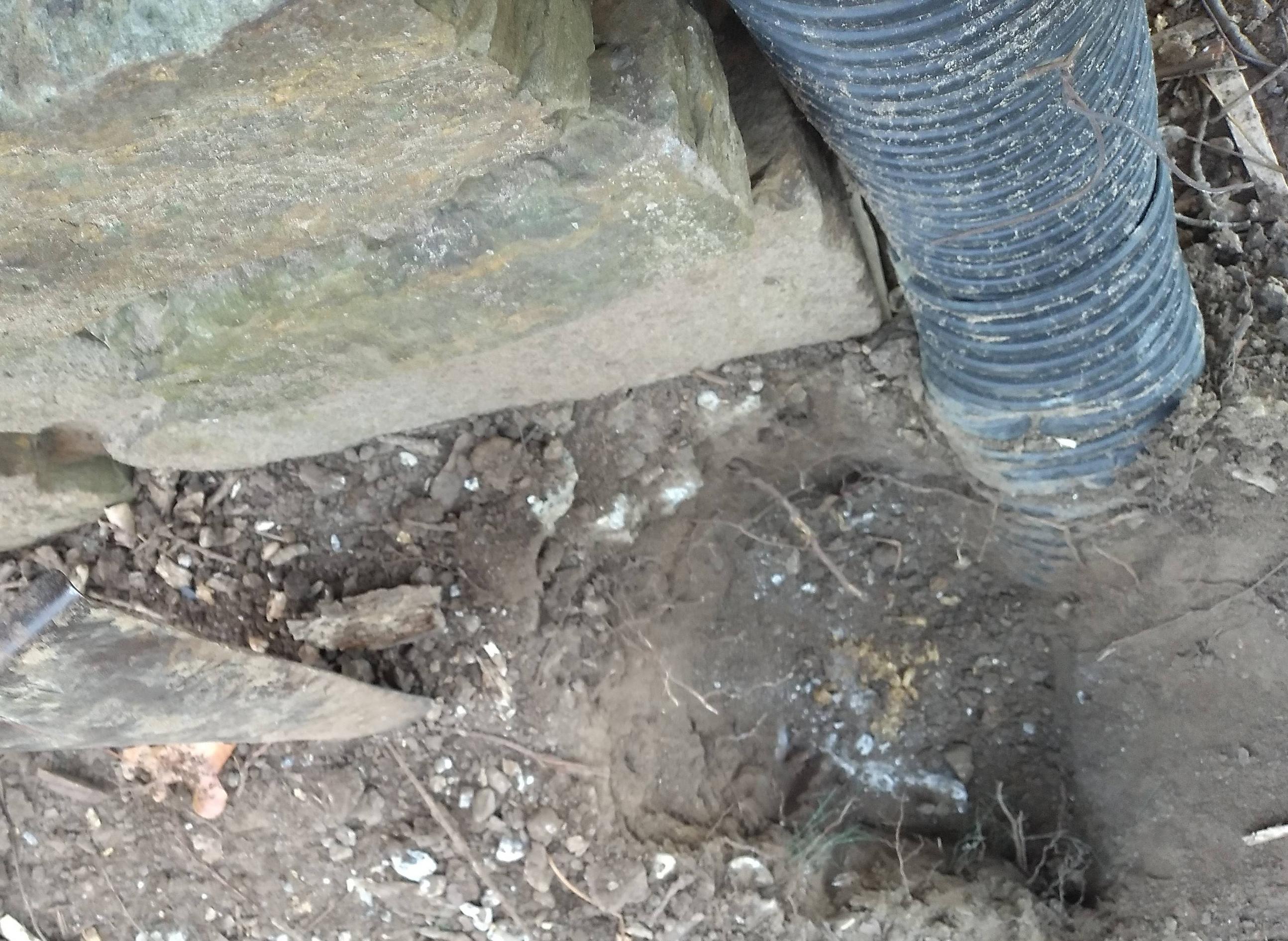 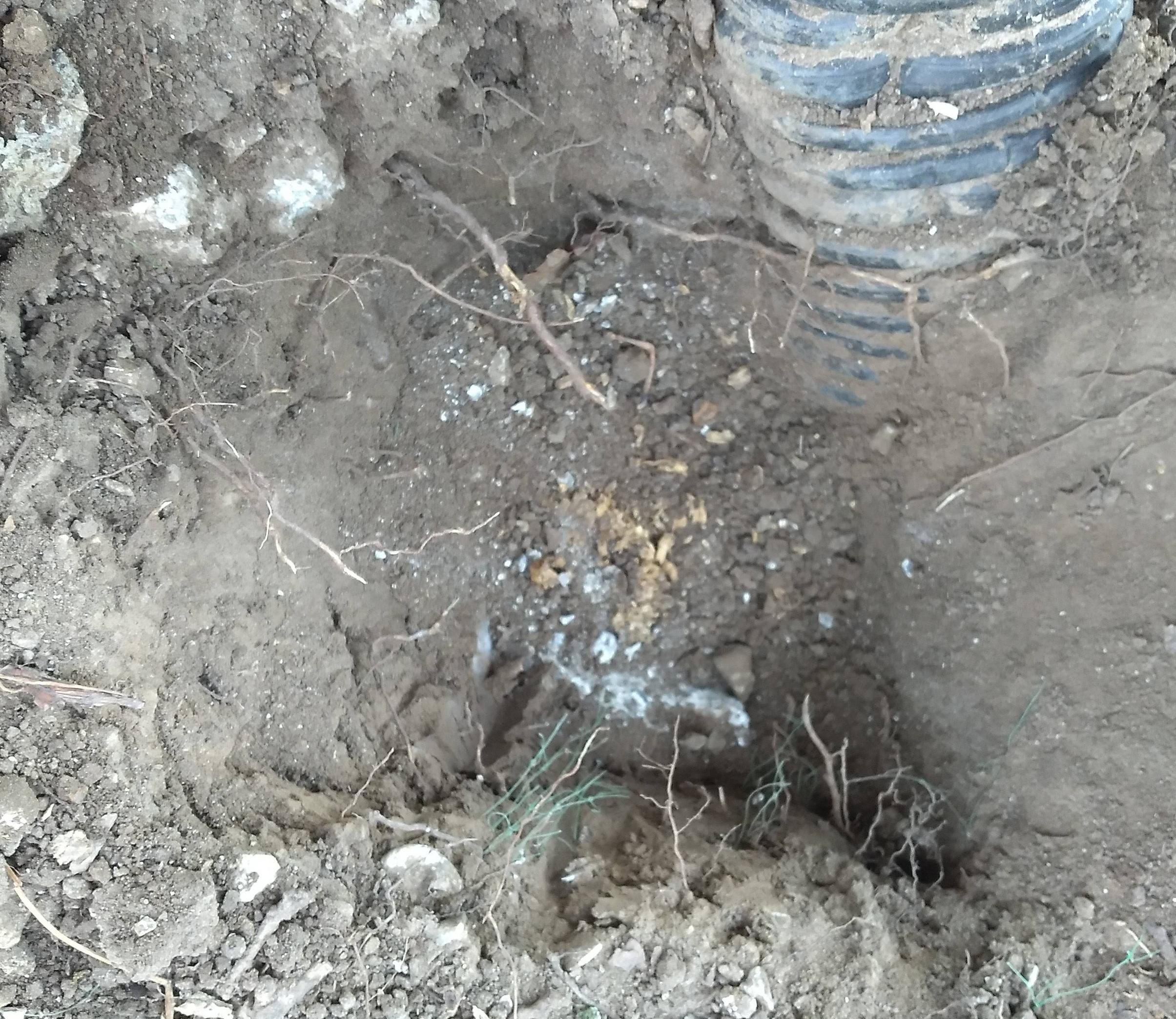 I finally figured out that this was probably the remnants of my old fencepost. There used to be a fence here, but a contractor took it down because this was the only side of my house with (barely) enough room to squeeze his heavy equipment through to get at my big retaining wall in the back I needed him to work on. Not wanting to go trough this again is why I'm set on making that gate as wide as possible between the tree and the house.

So what it looked like happened is that rather than pulling up the old posts, this one at least was just broken off with the (probably 2 foot deep) cement stub left buried in the ground.

I figure I'm probably going to have to just move my fence post somewhere else. Either further up the house (in which case I'll need a third post to jog around that tree), or past the downspout, which will be really tricky to avoid the underground part of the downspout and to clad the metal post around that spout.

But I thought before I do that I ought to ask if there are any tricks anyone knows to deal with a 2 foot deep buried blob of concrete and broken fence post? I'm thinking that's probably beyond a one person DIY level effort.

I tried attaching a pair of concrete eyebolts into the concrete, as suggested in a couple of the answers here. I used a 4x4 as a lever,put the fulcrum up near the hole, and stood on the other end. Unfortunately, the eyebolts came out before the concrete pug moved.

I'm not sure that approach is going to work without digging out around the plug a lot more (at which point I could just run a chain or strap around the plug itself and dispense with the bolts). The problem there is that its so close to the house that its really difficult to dig out between the two. I think I may just be down to burying it and planting my pole elsewhere.

Dig around the old concrete to free it.

Now dig a hole next to it.

Tip the concrete into the new hole.

Bury it and chive on.

If the block is in almost the right place, then re-use the old post hole.

Use an old chisel, to break up the old wooden post in the socket of the concrete. Alternatively, use an old large diameter drill and drill repeated holes, then chisel the rest out. Vacuum all of the rubbish out of the old socket, then just insert a new post in the old socket.

Alternatively, if there is no old post in the concrete, then use an SDS drill with a large Core-drill bit, and create a socket in the lump of concrete.

If you are fit, you should give it a go with a pencil point digging bar. Chip away at it and eventually, it'll give up.

As a fellow DIYer that doesn't like to give in, here's how I would proceed. First, I would remove dirt around it to give it an easy path out. Next, set a sawhorse over the hole. Last, use a come along (hand winch/cable puller) attached to the concrete with a concrete anchor.

Another option:
That's a big gate. Don't know if it's a double or single swing. If it's a single gate and will swing out you can pivot it off of the post near the oak tree, the post at the house will have very little lateral stress and can be lag-bolted into the framing of the house on the side.
For an inswing you could move it to the back corner of the house, around the corner from the downspout.
A gate that size may need a supporting wheel on the latch end.

Just pull the old post out of the concrete and reused the same hole for the new post. Home Depot sells large screws called timber lock screws, with a washer and chain screw that into a hard piece of the old wood. Then use a 4x4 as a fulcrum to lift the old piece of wood out of the concrete.

Not the answer you're looking for? Browse other questions tagged fence digging or ask your own question.

11
How do I remove a 4x4 fence post that is snapped off at ground level?
3
How do I place a terminal fence post next to my house?
3
Should I use concrete for a 2" square metal fence post?
0
How do I dig a fence post hole in a cramped corner?
1
Right tool to drill a 3 to 4" diameter hole approximately 3ft deep through remnants of a ground up tree stump
7
Setting fence post in gravel/backfill?
6
Wood fence posts in clay
3
How to replace loose 4x4 wood fence post with a steel post
3
Advice for fence placement at an angle with a tree in the way