What should I do about these broken beams and broken floor joists?

My house was built in 65 and we bought it a few years ago. I've been slowly fixing things as I can, like the giant rats nest of electrical wiring strewn about the attic :). Now I want to get to these problems my inspector showed me under the house. My uncle was giving me advice on how to fix it before he passed last year so I'm trying to figure out what to do on my own. I have reasonable woodworking, repair and tool skills but I have not done any frame level repairs before.

First up I have this center beam that looks like three pieces of wood stuck together and run along the length of the house. In two sections one of the three beams have broken. My idea was to get some long 1/4" stainless steel bolts, drill pilot holes through the beam every 18" along the broken sections and then screw them together. I'm not sure of the right type of bolts to buy though. 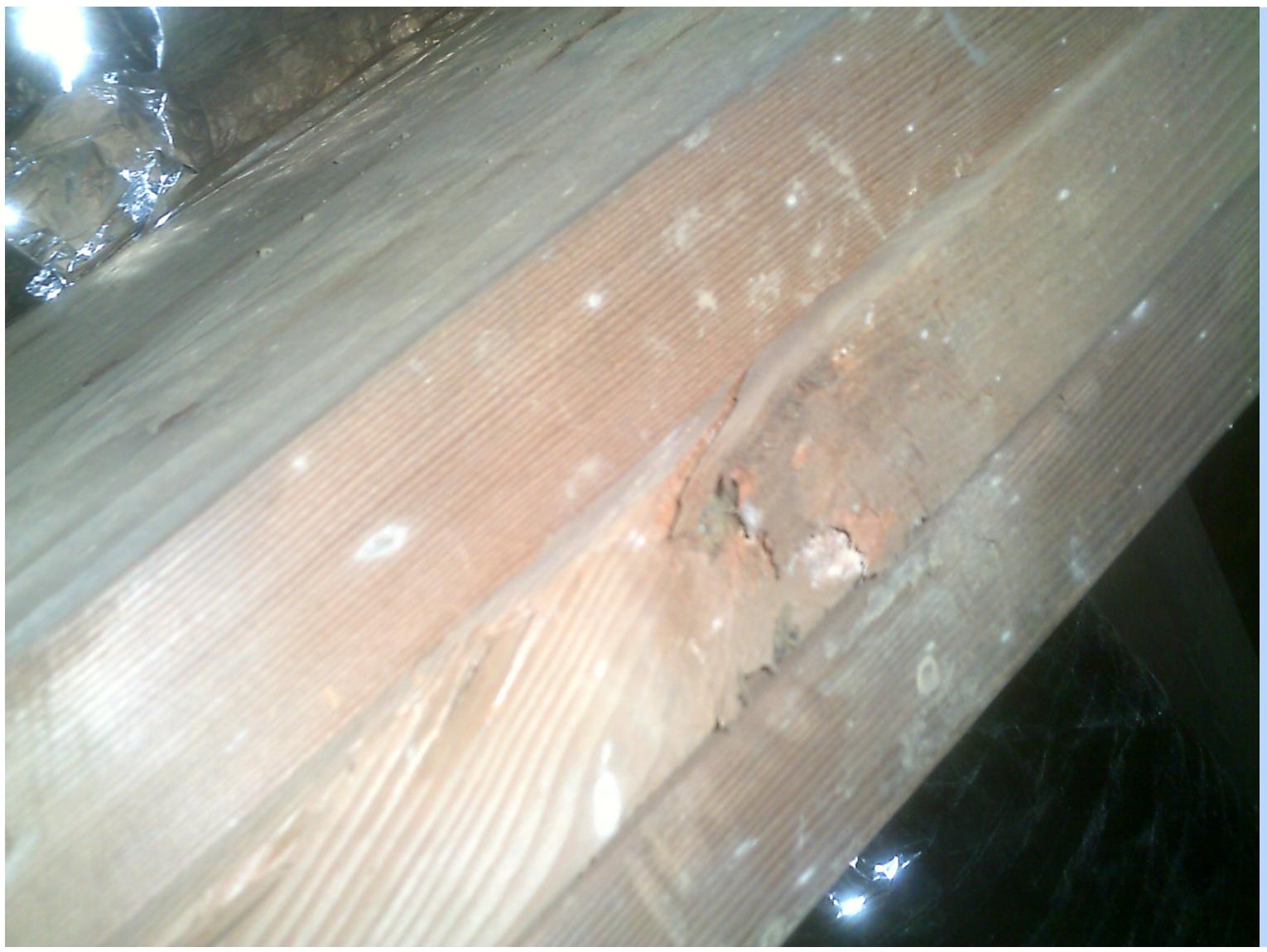 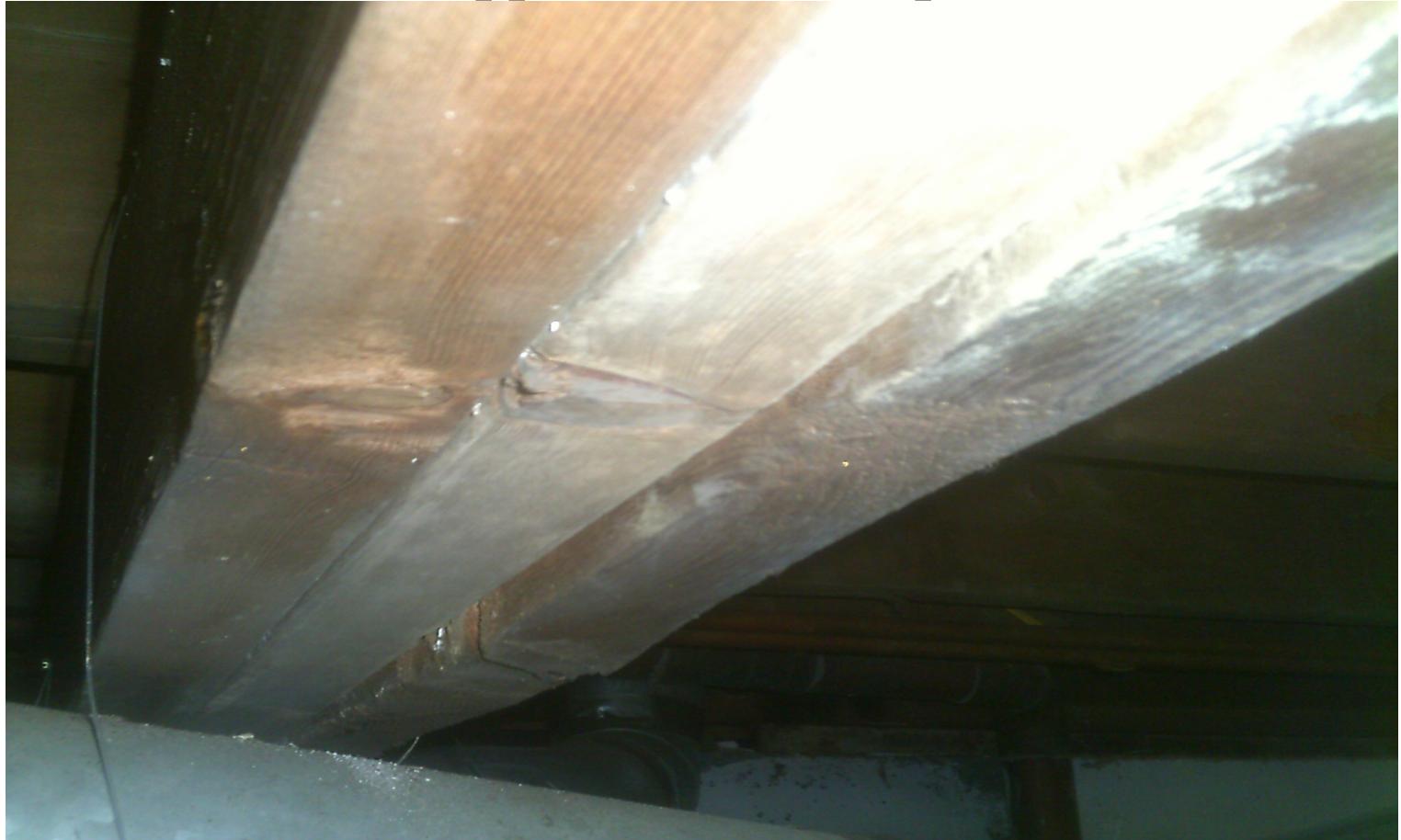 My second problem is a broken floor joist. I guess I could knock this out and try to replace it? Or maybe just sister another piece of wood to it? I remember my uncle mentioning using a floor jack to raise it back into place and then doing something. 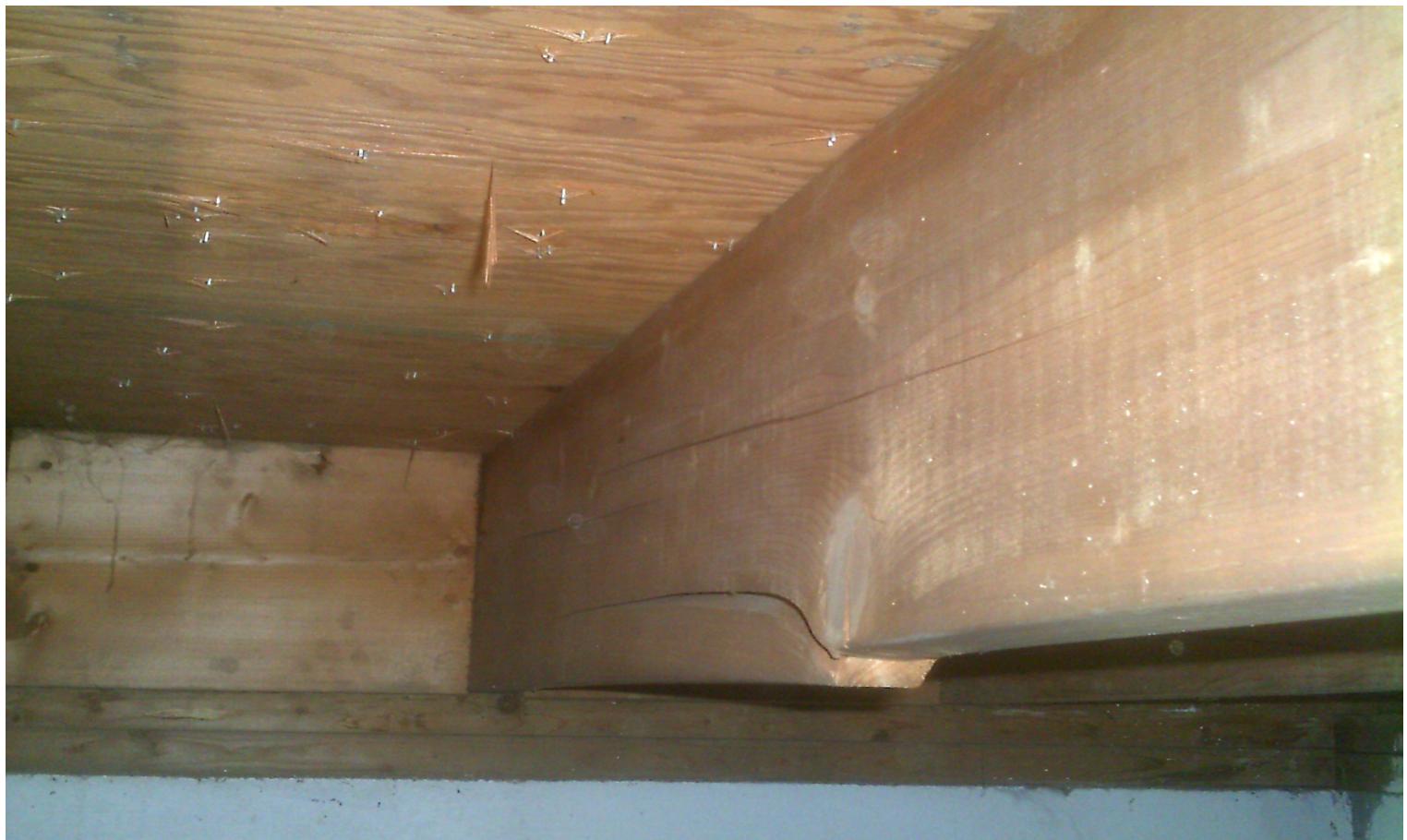 Finally, the beam rests on these old masonry shims. The advice I got was to replace them with metal shims. I can measure the spacing with calipers and find the right size metal plates to go in here. But then I'm not sure how to replace the old ones. Do I raise up the beam a little with a jack and slip them in? Or do I try to hammer the new ones through the old ones? Or do I stop thinking about this part of the repair and just call someone :) 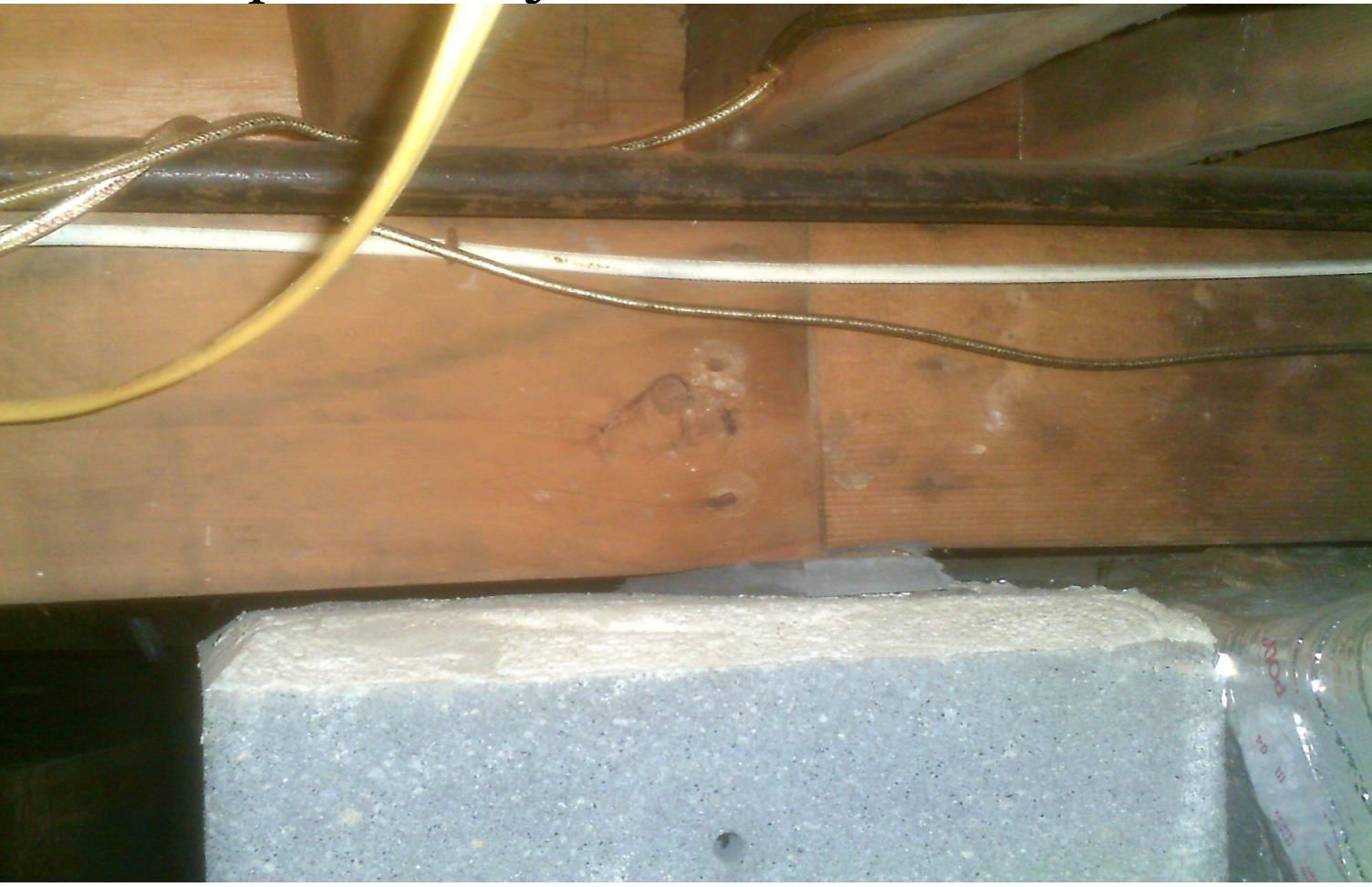 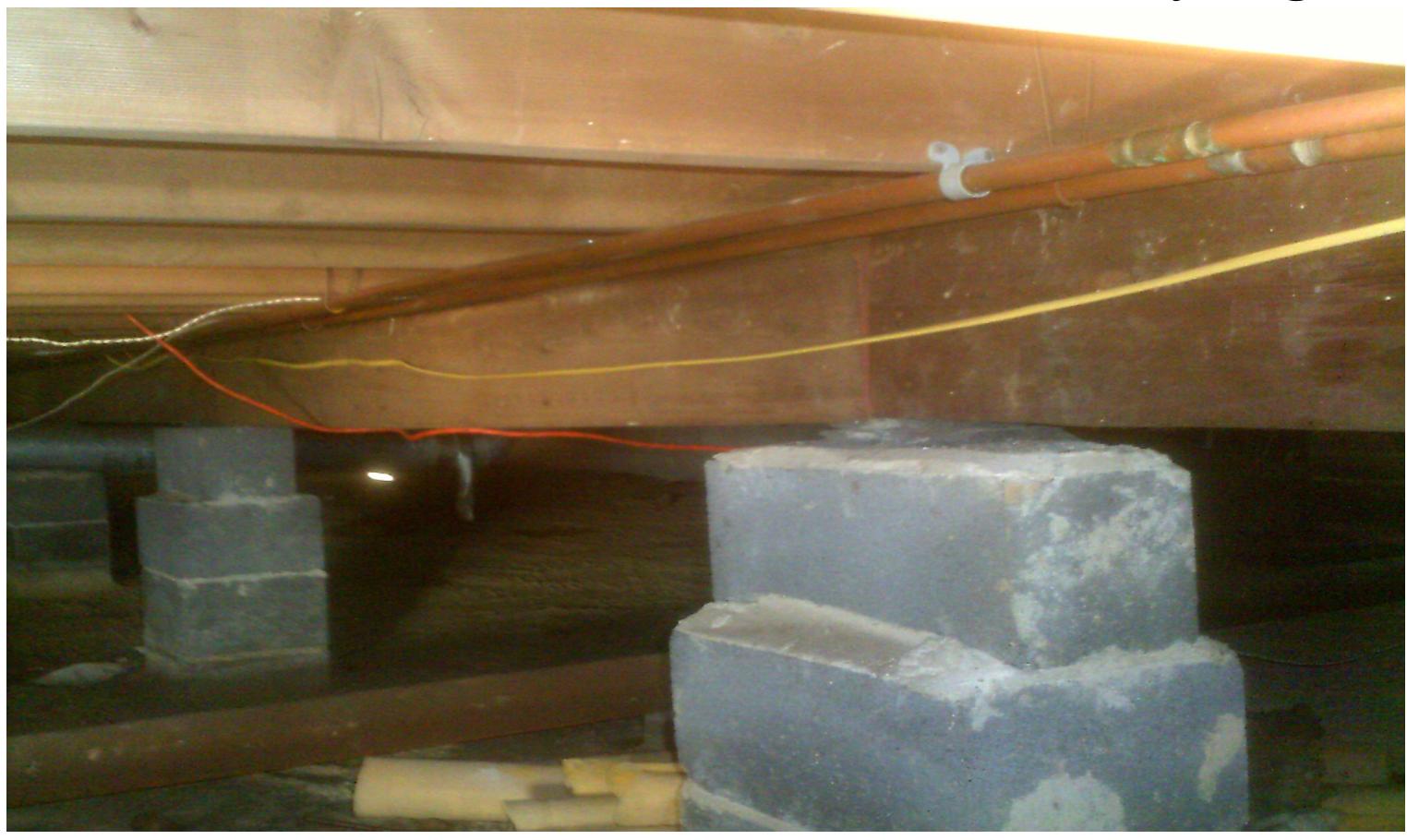 The lower support frame consists of 2x10" floor joists and 6x10” main support beams supported by a series of concrete block piers on independent footings, which is good, solid and more than adequate construction for a 1 level structure.

Deflection of the joists in the center main beam was noted at the center left and center right main beams, with splits at the center joist of the 3-joist beam that caused the deflection (spread between the joists due to dry wood, loose nails and load stress). The deflection is approximately 3/8 ”. This can cause deviations in the upper frame and cracks in walls, floor and door frames and cause doors to stick or not latch. It is recommended to install 1⁄4” through bolts with washers and lock nuts staggered every 18” along the beam to prevent further movement and stabilize the beam. There is also a split floor joist at the front left crawlspace floor frame, which need to be reinforced. A qualified frame contractor should be consulted on these matters for further evaluation and an estimate of repairs.

The main beams are improperly shimmed at the piers using masonry shims that only partially support the beams on the surface of the piers; this can cause movement and deflection and subsequent upper frame movement (see interior notes). A qualified frame contractor should be called to install full sized masonry or metal shims to support the beam across the full surface of the piers to prevent further gradual deflection and movement.

There were no other structurally significant findings observed at the lower support frame.

The cracks that you’ve photographed are called “checking.” The checks are accounted for by material specifiers and building designers. The concrete blocks can settle a bit, especially if the ground wasn’t compacted. I would stretch a string end-to-end along the bottom of the three-joist beam. If the beam has settled a bit, I’d shim it back up. A regular hydraulic car jack works well. Plywood makes good shims.

ok, sounds like your inspection is over and you can repair yourself if able.

1st pic: does not need alarm. simple or no repair. if, you can not sleep, then put 1/4" steel plate in 1/4" deep router slot area. drill and bolt to other side joists. run new 2x12 (if thats it) from one post to the other, over half way, on both posts. do this on both sides. then run 4" screws to hold it in place, both sides. then drill holes through, one up, one down, 5" apart vertical and 12" or 16" parallel in pairs now. lockwashers, long bolts... you get the idea. 2nd pic: same, post to post. before you tighten bolts, use a go bar, or car jack with long stick, and push that split up unto place with glue. then tighten bolts and let glue dry.

3rd pic: use car floor jack to lift floor. then use anything, but make sure its completely under the joist. all sides! if you want to spend to time, you can push the house unto place, level and plumb as possible. they also have permanent floor jacks. Amazon. don't worry, it just has to hold the house up! don't launch any high powered rockets though. research from my past fixer uppers. (real dumps).

I would just add supports where I could like where a beam is split or cracked or two beam butt up together and not sitting straight add a brace and a footer if there's room, a bottle neck jack to just lift up enough to make a footer load bearing I wouldn't jack up to much because houses settle and if you tweak one end something is tweaking at the other end could also could add cross beams for more spread out support if you was trying to get level a laser would make it easy on u I read something in an answer said if things aren't broken why fix them or mess with them or something like that, there's something called preventative maintenance if you can see an issue that you know something going to happen and you can do something to prevent it you just prevented something from breaking, I think the phrase if it's not broke don't fix it refers to just taking apart stuff for the heck of it

7
What are these beams for in my loft?
5
What should I do about this load bearing wall that is only supported by a joist floor?
9
How can I safely remove and replace a wall?
8
Structurally required? I-beam support under stair opening header
1
How to repair a beam of structured 2x10s
1
floor joists splitting at non-beam end
3
Can I use blocking between floor joists to support off-center jack studs in a load-bearing wall?
2
What should be done to check the capacity of a 100+ year old wooden floor joist?
2
Multiple split/cracked floor joists and header joist