Is this a bunch of wrong MWBCs?

I've just opened up my main panel with the plan of adding a new circuit, but have temporarily aborted that idea after squinting for a while, followed by getting worried. 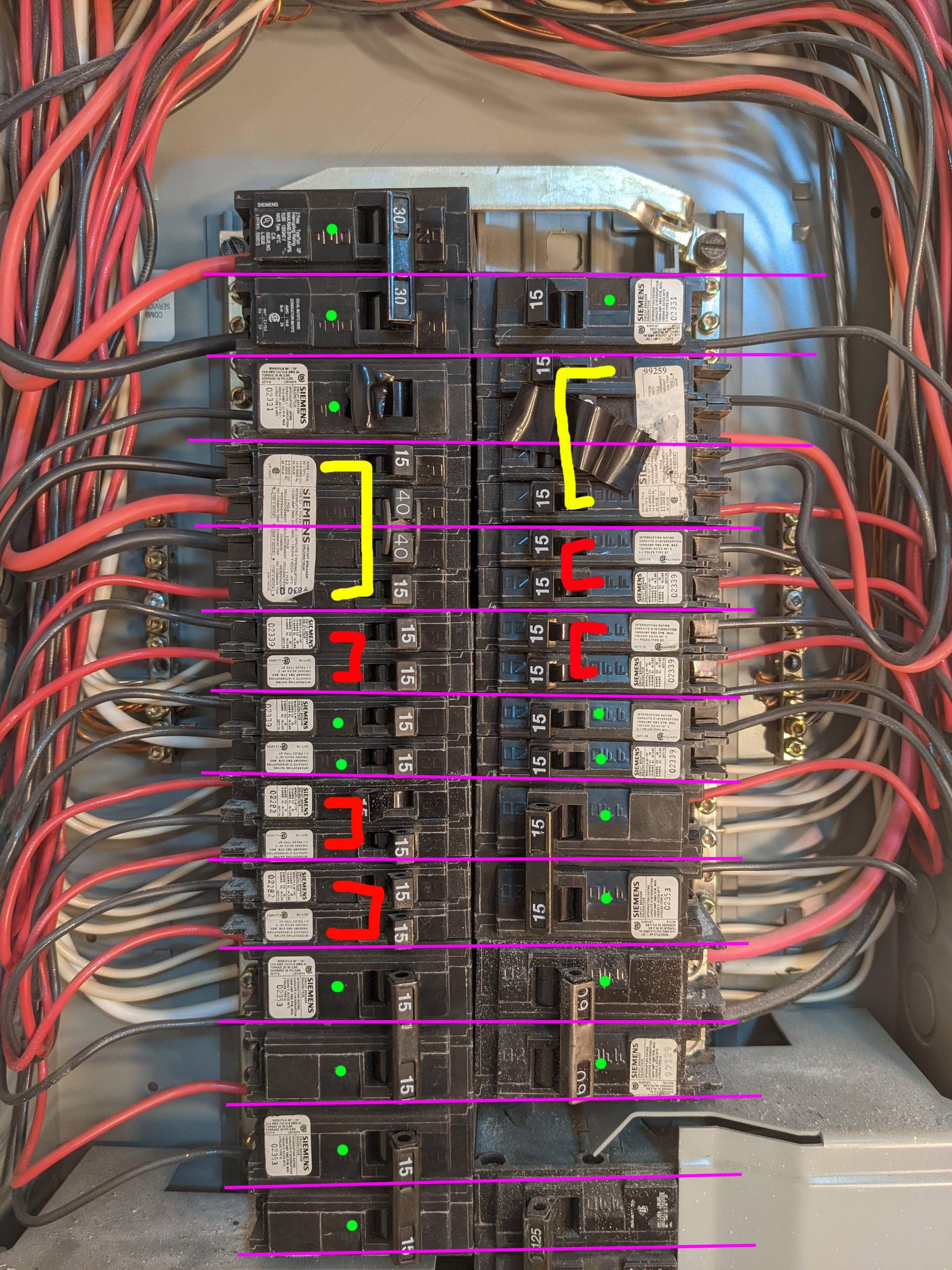 I put some pictures from more angles at https://imgur.com/a/TZkSZQi.

There's quite a lot of 14/3 (or 12/3) wires running running in the top of the panel and fewer 14/2 (or 12/2). The double pole breakers at the bottom seem to be reasonable MWBCs to me, but I'm particularly worried about the ones I marked in red and yellow (a fairly large proportion of them!)

My admittedly limited understanding is that each full row of the panel would correspond to a leg of the incoming power, so MWBC should only share a neutral when they're on double pole breakers or otherwise spanning two rows by being part of a quad breaker.

I'm also in BC, Canada and the home was built in 2002 in case that's relevant.

I'm also still just assuming that the smaller gauge red/blacks are part of 3 conductor bundles, I haven't yet turned off the main power and started trying to deduce which white/red/blacks are going to the same place, but I suppose some stranger configuration is possible too. e.g. that the various 15A black/reds are indeed on opposite phases (though untied) but that's been accomplished by splitting across rows "manually" and keeping track of what's on which phase... somehow (could that have been Code in 2002?).

(Editing to add this pictures that shows cables, indeed, not conduit): 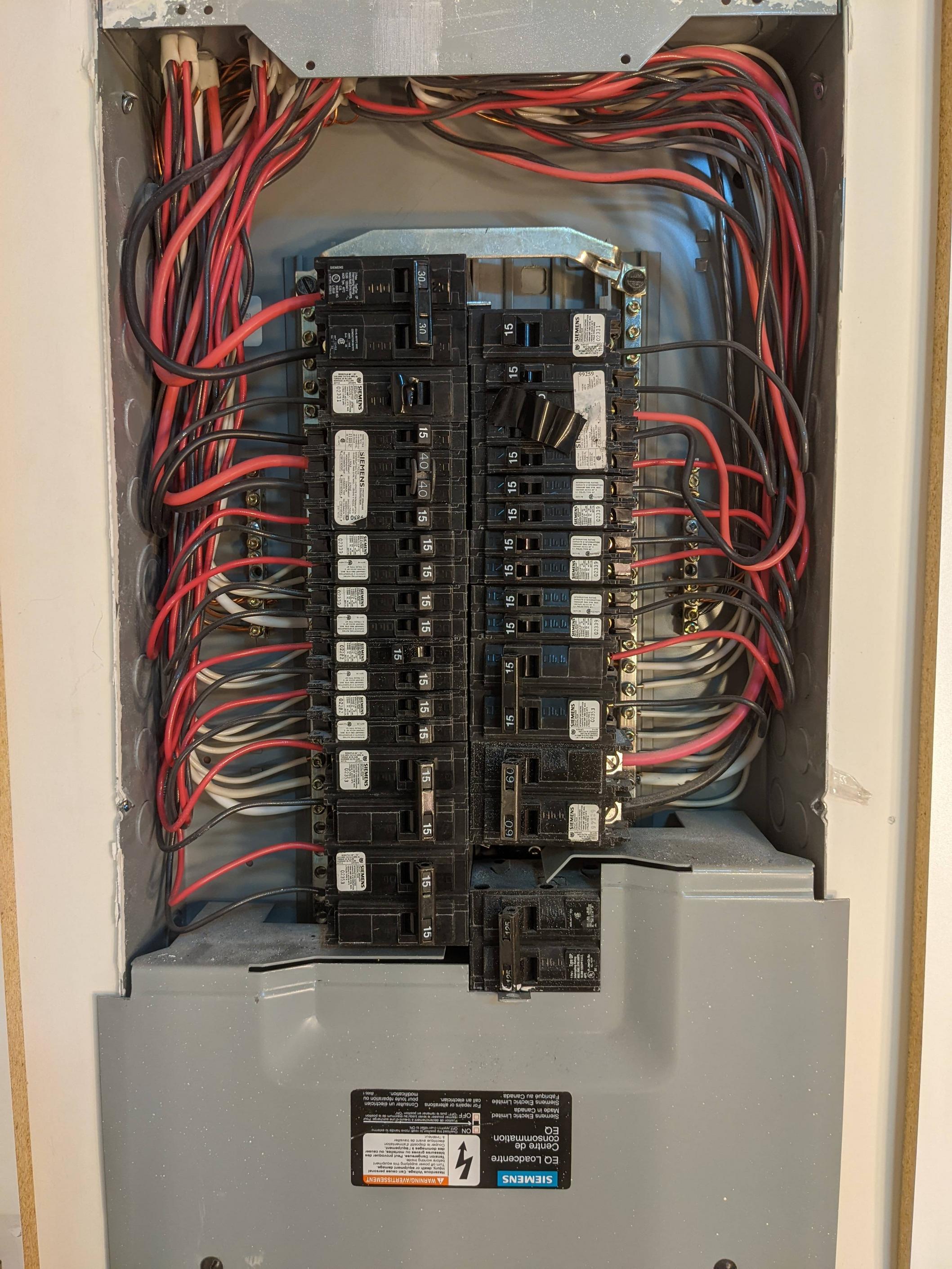 You appear to be correct to be concerned.

The "tandem breakers" in red (same phase half-width dual breakers) wired as MWBCs are the bigger concern and more difficult to resolve, since they will put up to 30 amps onto a shared 14Ga neutral wire. I guess it's possible that our hero who doesn't like handle ties wired them as if two of them side by side were quads, in which case the neutral current would be OK but the lack of common shutoff is bad, and I don't think any handle ties are listed to be used on a pair of tandems, rather than a quad.

The yellow ones would only need a handle tie. Depending when they were installed it might not technically be needed, (it became a requirement eventually) but it's certainly safer. Hmm, 2002, I guess it wasn't required here down-below until 2008 if the MWBC was not feeding devices on the same yoke. Not sure what the up-there date would be.)

Given the full panel, you probably need to move a bunch of stuff to a sub-panel, or a panel replacement with a bigger panel to actually resolve this. Sub-panel is generally going to be easier. Don't skimp on the size (number of spaces) of the sub-panel, and don't be concerned about the amperage rating of the sub-panel being higher than the breaker feeding it, if that happens to be how you get a lot of spaces in it.

I guess you might be able to replace pretty much all the tandems with handle-tied quads to make those proper MWBCs and replace one of the non-tandem pairs with another quad to add your new circuit, but that's a whole lot of quads and leaves you no room for the next thing.

See my post on panel design. Here is your panel with phases highlighted. 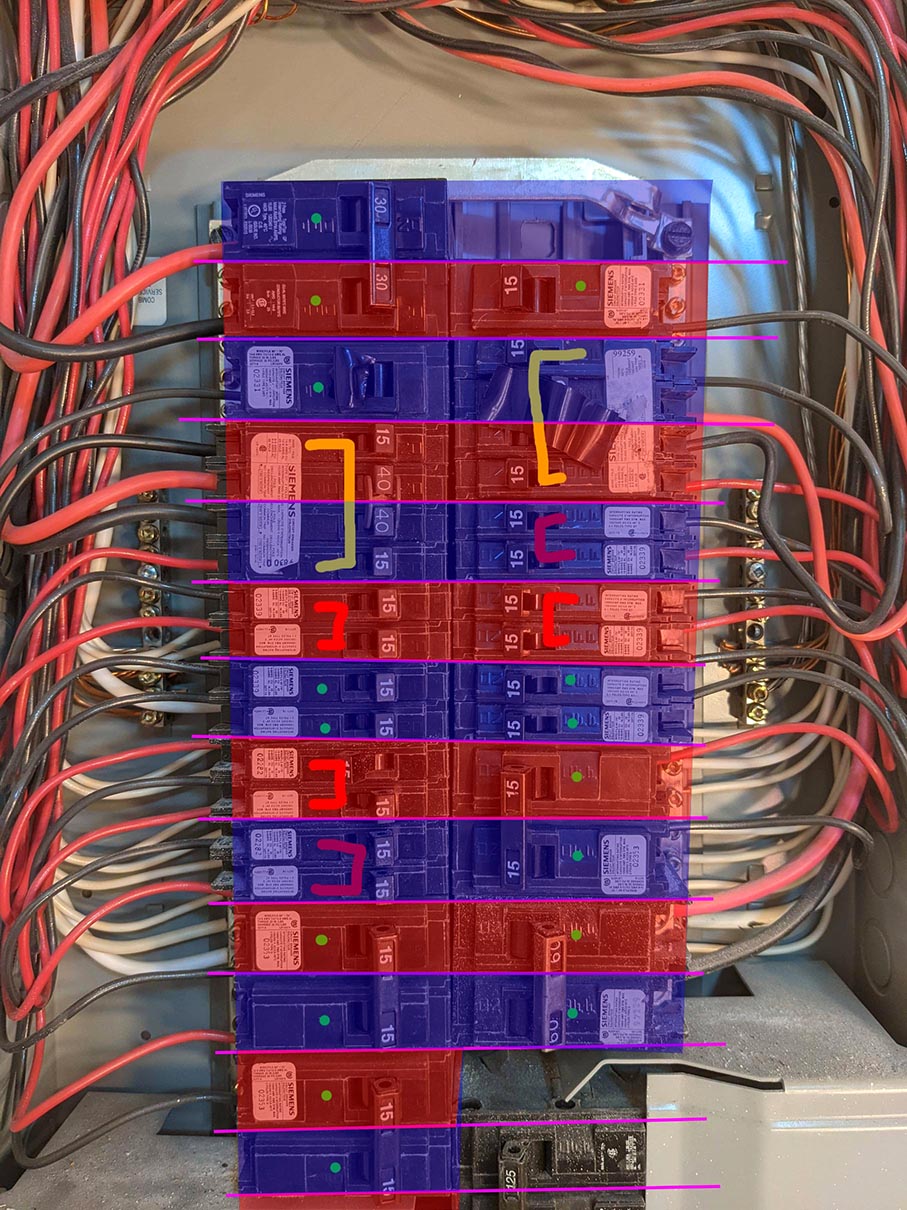 Since you have not chased each red-black pair from their respective cables, we don't know if they're improperly phased. That will tell the tale. Improperly phased breakers means the neutral is being overloaded. You'll want to fix that PDQ.

The colors I use for phases suggests a solution: position all black wires on odd rows, and all red wires on even rows. This would allow confirming at a glance that they are at least phased properly.

Other than that, you need listed handle-ties for each MWBC circuit. With tandems, that's a bit complicated.

The other way is to use handle-ties between tandem breakers. You can have an unlimited stack of those, with the tandems in any 2 slots having a handle-tie between them. You end up with single breakers at top and bottom that you'll need to find plain circuits for. It's a real nightmare to assemble many in a row, though.

Not the answer you're looking for? Browse other questions tagged electrical electrical-panel mwbc or ask your own question.

30
What is a tandem breaker (aka duplex, cheater, twin, double-stuff, etc.)?
16
What is the difference between a "handle tie" and "common trip" in circuit breakers?

1
Should the neutral for a GFCI be separate from other neutrals?
5
Swapping wires in electrical panel to move outlets to different phase of service. Is this safe?
5
Trying to install smart switches - came across something that looks wrong
3
MWBC and very low power factors
5
In a multiwire branch circuit, can the two hots be connected to the same phase?
0
Can I tie grounded/white and ground/bare from a subpanel to any grounding bar in in the main panel?
5
Multi-Wire Branch Circuit on wrong breakers
0
how to plug a 3 phases oven from the panel
0
3 phase MWBC - 2 pole breaker with shared neutral
9
Can you use a 2 pole 2-slot wide breaker to provide 240V?