I was trying to install a small ceiling hook for my lamp frame. Trying to just screw it in manually didn't work - the material of the ceiling is really soft and the hook doesn't hold. I tried to drill deeper into the ceiling to insert a plug in which to screw the hook, but after little more than one centimeter I hit metal and could get no further.

Before buying a harder drill bit to try and drill through it, is it safe to do so? Consider that the hole is being drilled near the electric cables of the lamp, so I figured it could be some kind of safe metal plate that's not supposed to be drilled through.

Edit: It can be seen from the pictures that I've tried already several spots, guessing that the cables would go in the other direction. Hit metal in every hole. 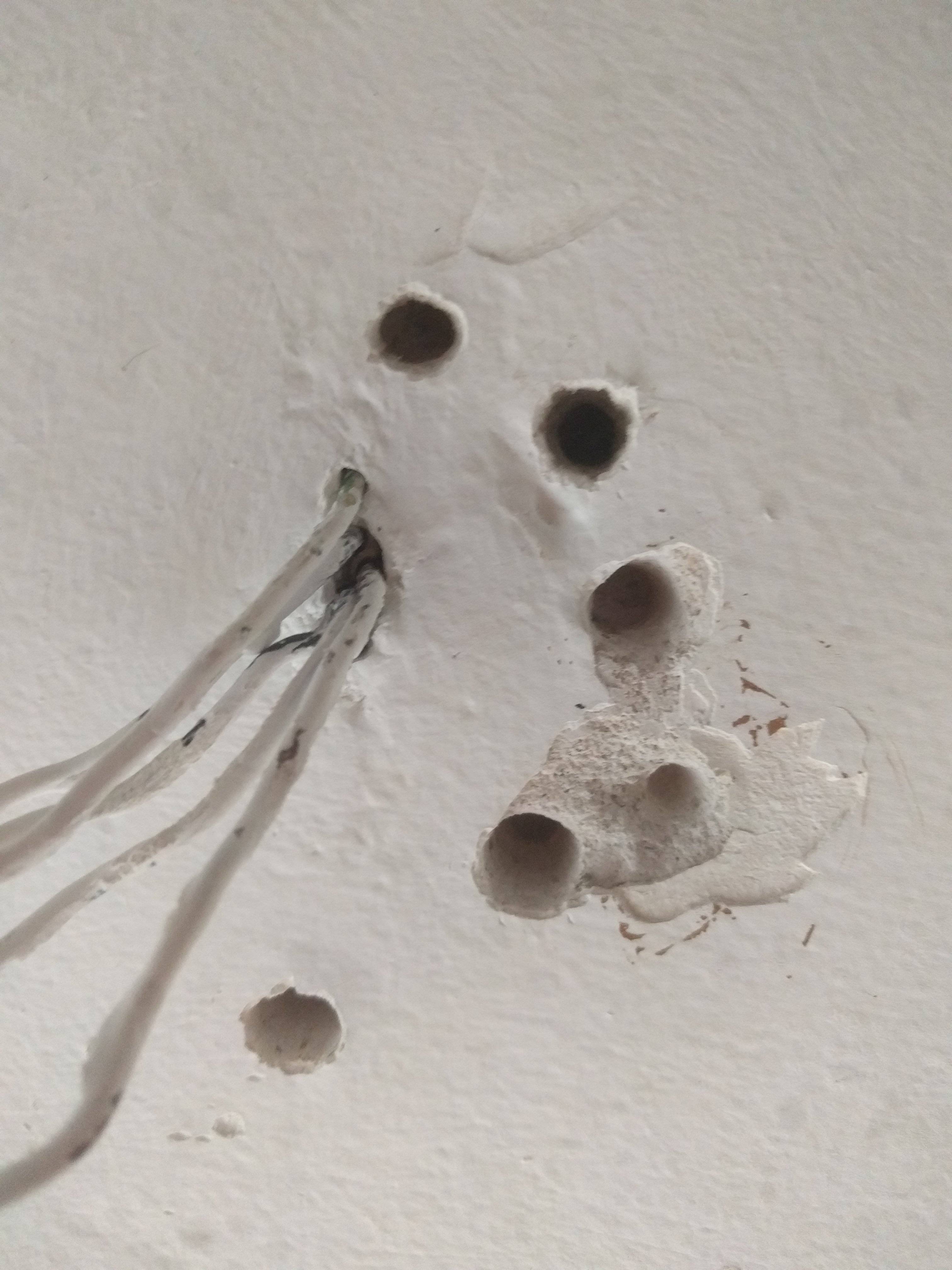 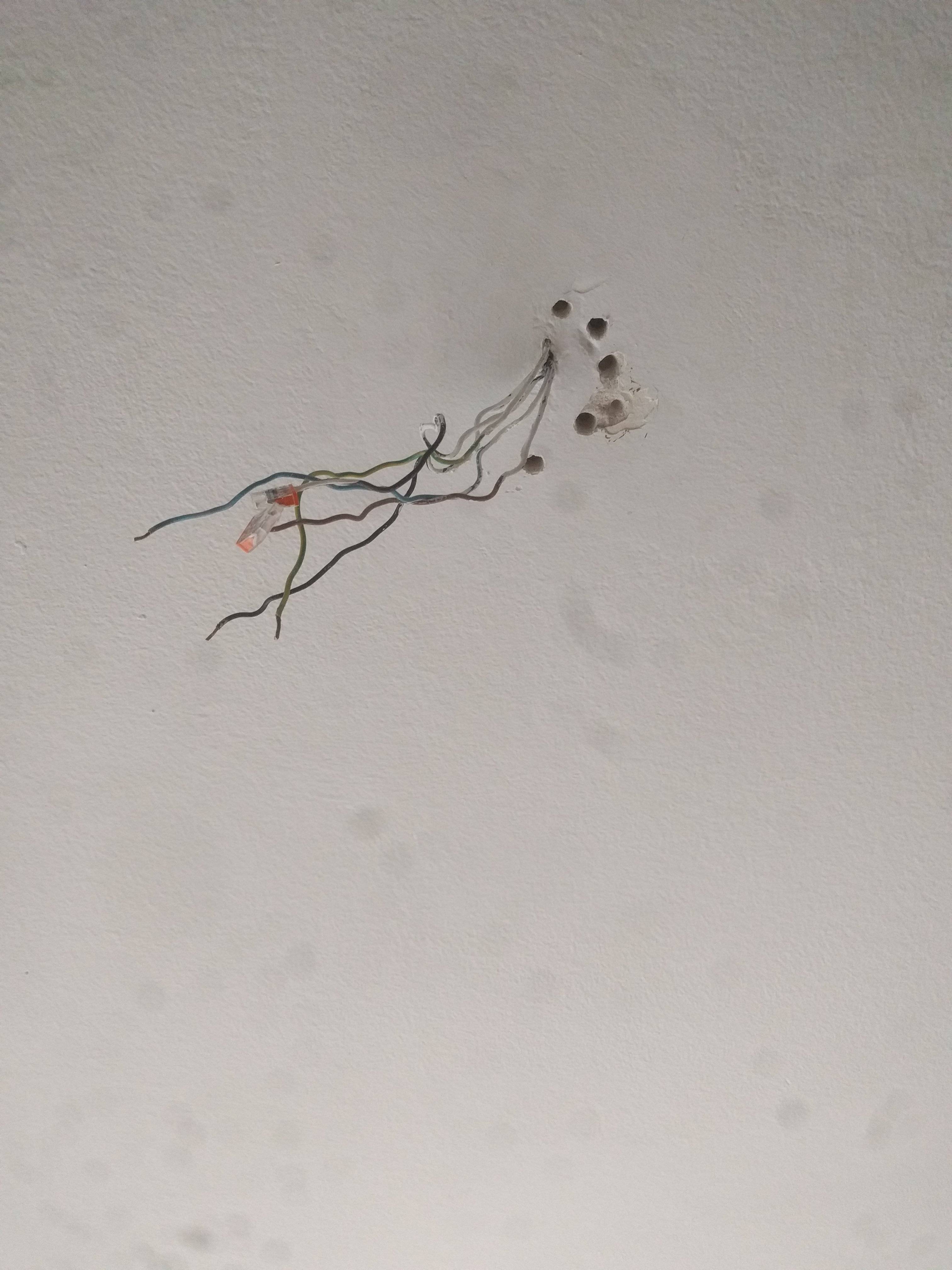 Metal plates in a wall have one job - to warn people that they are about to drill into a cable or pipe.

They are required anywhere cables or pipes are within 1-1/2" of the wall or ceiling surface. As long as you stop when you hit such a plate, it is safe to drill 1-1/4" into a wall or ceiling. (or the builder's fault if you hit a wire).

Ceilings and walls are made out of chalk

Really, that's putting it nicely. Next time you're at the lumberyard, find a chunk of drywall and compare that to a piece of chalkboard chalk. The chalkboard chalk is much stronger and tougher.

Drywall is simply not made to carry loads of any significance. You can't even thread into the stuff, you have to use some sort of back-braced anchor. But I wouldn't stick anchors into that ceiling, as you're likely to catch and pinch one of those rogue wires!

Find a joist or stud

This is where the "Stud finder" enters the picture. Use one of several ways to "look into the wall" and find where the studs or joists are. Those are not made of chalk, but of strong wood or other material (sometimes steel) that you can drill into and will hold a thread.

You distinguish a steel joist from a guard plate by following it. If it goes all the way across the wall/ceiling, and there's one at standard spacing, those are steel joists or studs.

That wiring is absolutely improper.

You don't have a bunch of loose wires coming through a hole in the ceiling. They are required to come into a junction box which is typically embedded in the ceiling. Your cables are a bit odd in that they have green grounds; so make sure they are a legal cable type and not lamp cord or the like.

The junction box is securely mounted to a joist and provides the physical support for the lamp. Junction boxes are made that mount at the edge of joists, overlapping a joist offset or center, or span between joists on a brace (look for fan boxes).

The cables should have an outer sheath. The sheath must come at least 1/4" into the junction box, on a proper cable clamp.

6
What size drill bit do I need for a 3/16" plastic anchor in tile?
2
how to drill through two different materials
2
DIY machinist drilling problem
1
Drilling into outdoor stucco to hang bike
3
How to drill a 0.75" hole in metal
0
Hit metal piece while drilling through condo concrete ceiling
0
What’s preventing my drill from going though my wall?
1
What hard thing am I hitting in my brick wall?