Why do washing machines require high pressure to operate?

Edited: From most sources on the internet I see that washing machines require valves require atleast 20psi to open. Why do washing machines require more anymore pressure than would be required to wash your hands? I checked my LG front loading washing machine. The water is sent to the detergent holder bucket from the inlet valve. The bucket should remove any pressure, so the machine surely doesn't use the pressure for washing. The only answer I found was to prevent the valve solenoids from damage from prolonged use. But I don't find that answer satisfiable since the valves themselves seem to be reducing the flow rate by have small inlets.

Solenoid valves require water pressure to seal off when closed.

These are normally closed valves, which means there is no electrical energy to close the valve, only to open it. The closing energy comes from a coiled spring, which recoils when the solenoid is de-energized, thus shutting the valve. ("De-energizing" in this context just means cutting the power to the solenoid; no other special action is needed to "remove" the energy.)

This same principle is used in bathtub stoppers, where the weight of the water (the water pressure at the stopper) helps keep the stopper pressed firmly into its orifice to form a tight seal. For instance, an inch of water in the tub may not suffice to maintain a seal and water will eventually seep out, but adding more water to the tub increases the pressure at the stopper and helps close the seal tightly.

A normally closed valve is used so that it fails closed in the absence of electrical power. 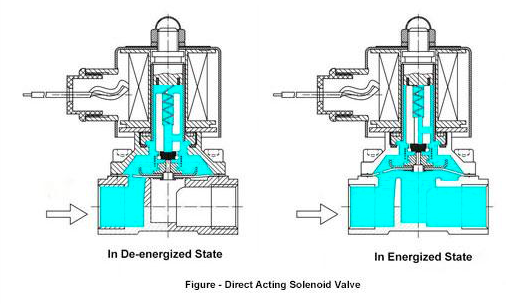 A normally open valve could be sufficiently energized by means of the solenoid to push back against a wider range of water pressure, however they would fail open if there is no electrical power.

Motorized water valves work differently, in that they turn a ball valve or a threaded valve just like one would turn a tap. The motor itself does not push against the water pressure, neither does any sort of spring action. These valves halt their opening or closing action in absence of power and there is generally no guarantee to fail open or closed, and feedback sensors and/or secondary shutoffs are implemented where operational risks require.

3
When to turn on the water for my washing machine?
1
How to determine if a Water Pressure Reducing Valve (PRV) is working properly
1
Washing Machine Hookups Not Shutting Off
0
Water Pressure Issue? First water heater leaked, then softener, now my washer long filled
0
Washing machine conditioner drawer no longer receives water; how to fix?
0
Descaling a top loading washing machine without a built in heater
1
How are washing machine intake valve solenoids controlled?