Can I pour a concrete foundation in multiple pieces?

I'm building a 25-meter (65 foot) block retaining wall. The engineering specifications require a concrete foundation for the block wall equal to about 4 cubic metres (141 cubic feet) of concrete, with reinforcing bar/mesh throughout. This includes 10% waste.

Due to access problems on our (rural) property, the premix concrete supplier will need to make multiple deliveries with a small truck. However, they won’t guarantee the deliveries will all arrive within a particular time window, or even on the same day. I don’t want to get halfway through pouring a single foundation only to find out the next delivery won’t be for another day.

My proposed solution is to pour the foundation in multiple sections to guarantee each section will be completed in a single pour. Reinforcing bar runs between sections joining them together, and formwork used to hold each section in place until the next section is ready to pour.

Can I pour the foundation in a number of smaller segments which are joined by the reinforcing bar but poured on different days, or will this result in a severe structural problem for the wall sitting on the foundation?

Is a better approach to hire my own mixer and pour many small sections, similar to what is described in this question?

As others have said, the first thing to do is to carry the reinforcement beyond each “day” joint to give continuity of reinforcement.

As long as adjacent concrete sections are poured within approximately 3 days of each other, the individual sections of concrete will fuse as the concrete cures and the cement hydrates to create a single contiguous piece of concrete.

Yes. To get better results please do the following:

Side View of the Concrete Footing: 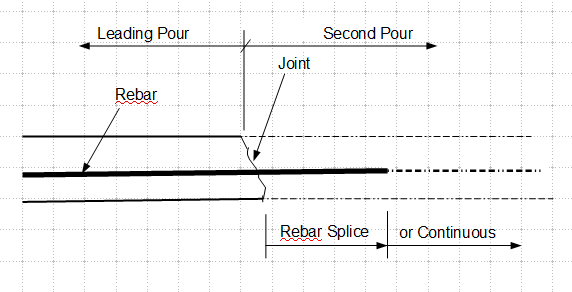 Note: If you choose splice over continuing the rebars, please check with your engineer or the local code regarding the splice length requirement.

In addition to the rebar extensions you may consider applying concrete bonding adhesive depending on the time between pours. 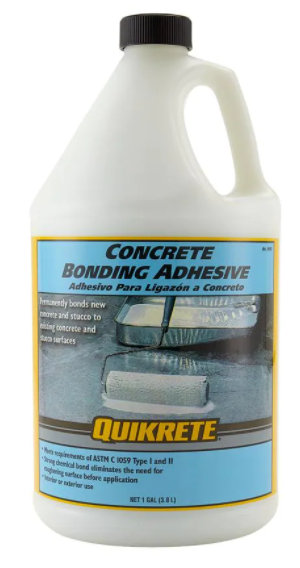 We had a similar issue with retaining walls and multiple pours.

Based on that and what we learned, this would be my approach to your problem:

First, the biggest issue by far, is steel close to the surface or crossing a join. Your problem then becomes,how to be certain that water can't flow (however slowly,even through a join), and over time cause corrosion and degradation.

There are systems for that, but they tend to be specialised and often, expensive.

I'd ditch the entire problem by avoiding it, totally

A wall that length, the footing is providing ground support. It almost certainly doesn't matter if its actually cast as 3 x 8.3 m sections, because the ground load spreading will be identical. The middle part isn't relying on the end parts for support, because it's too long and thin - if it needs support, it will have buttressing designed in, by the engineer,it won't rely on full length steel for it.

So I would check with the engineer, is it okay to cast the footing as say, 2 ~ 4 lengths of 6 ~ 12 m each. In each section, stop the steel 70mm before the end, and restart it 70mm into the next section.

I would expect this to give identical results with no risk, and no need to take protective measures for the joints. It will still look and act exactly as the original design would have done. (It sounds like).

At the absolute worst, you gain control joints every 6~ 12 m, which is a good idea anyway. It means that if the ground was going to have poor support in an area (could be likely over a 25m run?), the original would quite possibly have uncontrolled cracking, exposing steel. Very bad idea. This way, each section is shorter and much more likely to act as a whole, under stress. Any cracking will manifest at a section end, where steel won't be exposed. If that kind of settlement happens - it would have happened anyway, most likely and this way is likely to control it better and make it much easier to make good.

But check with your engineer to be sure.

7
How to finish room with protruding concrete ledge/foundation?
1
What type of concrete foundation do you pour for sand?
1
Handling basement water infiltration behind bulkhead
0
Can I pour concrete next to my foundation?
2
Does this foundation wall crack justify immediate corrective action?
2
Is a concrete slab required to support a block wall?
1
Is a too-shallow foundation allowing excessive water into my dirt crawl space?
1
How can I protect my foundation when removing old retaining walls and regrading?